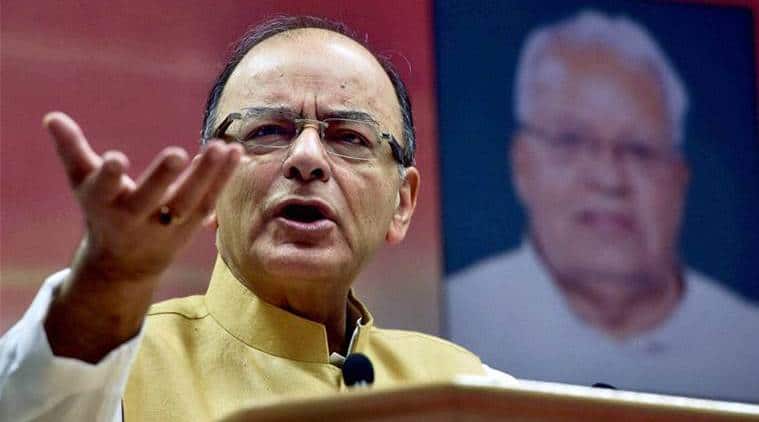 The proposed uniform taxation regime, GST will integrate the country into one single market by ensuring a free flow of goods and services across the country, Jaitley said. (Source: File/PTI)

Amid intense speculation over the rate of Goods and Services Tax (GST), Finance Minister Arun Jaitley on Saturday said moderate taxes and high evasions cannot coexist. “If all taxpayers pay their taxes, it will help bring in tax rates further low. The more the evasions and exemptions, the higher will be the tax rate. So, moderate tax rates and evasions cannot co-exist,” Jaitley told a meeting of BJP workers in Mumbai. The minister was replying to a demand made by Ashish Shelar, Mumbai BJP unit president, to bring the proposed GST rate at 17 per cent.

Explaining the rationale further, the minister said when more people evade taxes, it brings in an aberration in tax
structures. The proposed uniform taxation regime, GST will integrate the country into one single market by ensuring a free flow of goods and services across the country, Jaitley said, adding that in order to enable this, we should have a uniform tax rate throughout the country.

He also said that a large section of the people, who file income tax return don’t actually pay the taxes. Claiming that barring Dubai and Singapore, our tax rates are now becoming more reasonable, he said for indirect tax rates to come down further, there is a need to increase its base and to achieve that “everyone should pay their taxes”.

Stating that GST implementation was his immediate challenge, the minister said the next challenge will be
strengthening the banks. “The government is working on strengthening the public sector banks and we are determined to do it,” he said.

Earlier this month, Parliament passed the much-delayed GST Bill and the Assemblies of Assam and Bihar also did the same. The Bill needs to be passed at least by 17 more states with two-thirds majority for the Bill to get constitutional validity. The peak GST rate will be finalised by the proposed GST council comprising the Union Finance Minister and his state counterparts, even as the chief economic advisor has suggested an 18 per cent peak rate.