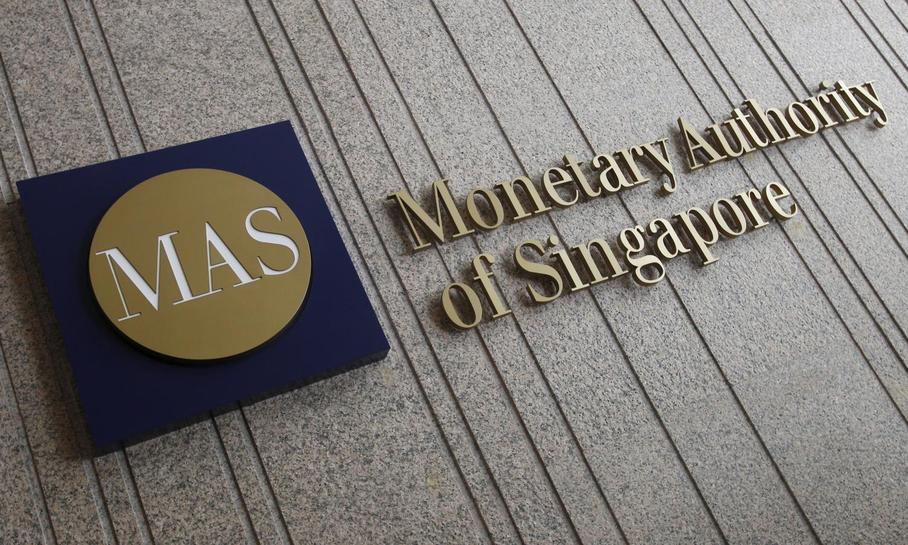 The logo of the Monetary Authority of Singapore (MAS) is pictured at its building in Singapore in this February 21, 2013 file photo.

SINGAPORE Singapore’s central bank unexpectedly eased policy on Thursday after growth stalled in the first quarter and as slackening global demand darkened the outlook for the trade-dependent economy, sending the local dollar tumbling to its worst loss in eight months.

The move comes as the affluent city state has struggled to motor on in the face of collapsing exports, a depressed manufacturing sector and low inflation – a toxic combination that has seen global policy makers scrambling to restore momentum through aggressive easings.

In its third policy easing in 15 months, the Monetary Authority of Singapore (MAS) said it will set the rate of appreciation of the Singapore dollar NEER policy band at zero percent – starting on Thursday – and shift to a neutral policy stance.

It marked the first time the MAS has moved to ‘neutral’ since the global financial crisis, and compares with its previous policy stance of a “modest and gradual” appreciation of the Singapore dollar.

“This is a surprise move to neutral in response to what they see as more modest growth this year,” said Khoon Goh, senior currency strategist at ANZ in Singapore.

“I think it’s quite possible that ongoing downside risk to global growth and weakness in the U.S. dollar and the decline in the RMB (renminbi) effective exchange rate might have also prompted this easing move by MAS.”

Singapore manages monetary policy via changes to the exchange rate rather than interest rates because trade flows dwarf the $290 billion economy.

Against a backdrop of sluggish global demand and low inflation, the MAS eased monetary policy twice last year, once in an unscheduled policy review in January 2015. The deteriorating external conditions over recent months have also prompted the U.S. Federal Reserve to signal a more measured approach to future rate increases.

“The Singapore economy is projected to expand at a more modest pace in 2016 than envisaged in the October policy review,” the MAS said in its semiannual policy statement.

“Core inflation should also pick up more gradually over the course of 2016 than previously anticipated,” it said.

Official data released on Thursday showed that Singapore’s economy failed to post growth in the first quarter from the previous three months – gloomy figures that follow 2.0 percent growth in 2015, the weakest in six years.

Singapore’s manufacturing sector has also taken a hit from falls in global oil prices, which have dampened demand for oil rigs built by the city-state’s large rig industry.

A majority of analysts in a Reuters survey had predicted that the MAS would keep its exchange-rate based monetary policy unchanged, though some had expected an easing due to weak exports and a depressed manufacturing sector.

The central bank decision was pounced on by Singapore dollar bears, sending it down to 1.3636 on the U.S. dollar – its weakest since March 29 and the biggest fall since August last year.

Analysts expect more downside for the Singapore currency given the weak outlook for growth and a slowdown in China, the city state’s biggest trading partner.

“The big picture is that we expect Singapore’s economy to grow at a fairly sluggish rate of just 2 percent this year and next,” said Daniel Martin, senior economist at Capital Economics.

“In the short-term growth will be held back by rising local interest rates, which track the Fed funds rate closely.”

Previous Internet Initiative Japan : IIJ Group Expands its Cloud Service Lineup for the IIJ GIO US Service
Next 'Descendants of the Sun' ends this week: Here's why it's so popular