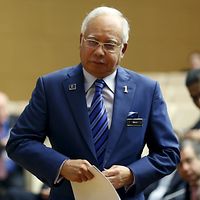 (AFP) Luxembourg on Thursday launched a money laundering probe linked to a corruption scandal embroiling Malaysian Premier Najib Razak who is accused of using money in a state-run fund for his own purposes.

Najib, 62, has been under fire over allegations that billions of dollars were stolen from 1MDB, the now struggling state firm he founded, and his acceptance of a $681 million overseas payment.

Reports have also emerged of the luxurious lifestyles, lavish spending and jet-set travel arrangements of his family, stoking calls for his resignation.

The Luxembourg prosecutor’s office said in a statement that it had launched the probe “following revelations about the alleged diversion of funds from 1MDB”.

“The suit concerns money laundering of funds likely to have come from the embezzlement of public monies,” it said.

It said the decision to task an examining magistrate with the probe was taken “after concrete indications” that public money had been diverted via offshore companies with accounts in Singapore, Switzerland and Luxembourg.

The probe will focus on tracking down payments made after bond issues in May and October 2012, it said.

US authorities are reportedly looking into 1MDB-related fund flows, while Swiss, British, Singaporean and Hong Kong authorities also are scrutinising them.

Najib denies any wrongdoing, saying the corruption accusations are part of an unspecified political conspiracy against him.

He has curbed investigations into the scandal and purged his ruling United Malays National Organisation (UMNO) of critics, essentially shutting off internal party challenges.

His no-nonsense predecessor Mahatir Mohamad demanded last week that Najib return hundreds of millions of dollars that ended up in his personal bank accounts to the government.