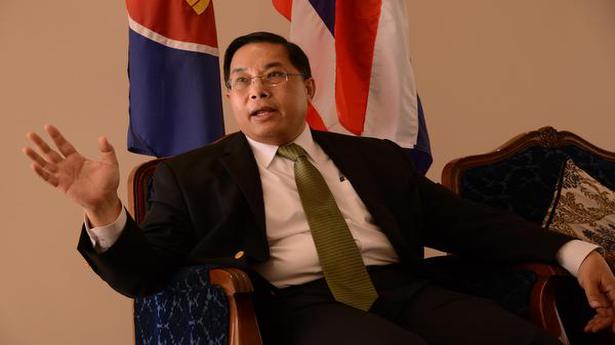 Connectivity projects can grow in the region only if there is a “political atmosphere” and “nationalist rhetoric” is reduced, says Thailand’s Ambassador to India and a key official convening the ASEAN-India summit this week here, referring to the challenges of free trade negotiations, border trade logistics and the infrastructure in India’s northeastern States.

“Connectivity is important, but we are also at a point across the region when nationalism and populism are on the rise. To have connectivity work to its full potential it is necessary to dial down the nationalistic rhetoric,” Ambassador Chutintorn Sam Gongsakdi told The Hindu in an interview ahead of the summit, which will see all the 10 leaders of the Association of Southeast Asian Nations, assemble in Delhi for the 25-year commemorative summit on January 25 and as chief guests of the Republic Day parade.

On Monday, an ASEAN-India Business and Investment Meet and Expo brought Trade and Economy Ministers along with business delegations from ASEAN including Myanmar, Thailand, Cambodia, Singapore, Indonesia, Laos, Vietnam, Malaysia, Brunei and the Philippines. Several officials will also travel to Assam and other northeastern States to inspect the possibilities for industry and trade, which would connect to South East Asia through projects in the pipeline like the India-Myanmar-Thailand trilateral highway and the Kaladan multi-modal transport corridor expected to be completed in the next few years. However, Mr. Gongsakdi warned that unless India and ASEAN work out their reservations on free trade, including the Regional Comprehensive Economic Partnership (RCEP) agreement, they wont benefit from the infrastructure.

“Building of roads, that just needs engineering and money. But the other part, convincing all the parties that there will be more costs is the difficult one. In the end, regional integration and liberalisation can be good for your country, and make the leadership more popular, but people need to have patience to see the long-term benefits,” he said.

Over the past few years, the RCEP negotiations have floundered largely over Indian concerns on unfettered Chinese entry into Indian markets through free trade with the ASEAN countries. Countries in the negotiations, which also include Australia, New Zealand, China, Japan and South Korea, besides ASEAN and India are now calling for a hard deadline to end talks by the end of 2018. The failure to forge an agreement could also cost bilateral trade between ASEAN and India, which is at present $76 billion, well short of a projected $200 billion, and is likely to be a major issue for discussion during the Summit on Thursday.

“We have to find a solution to India’s concerns about [the RCEP opening the door for] China trade as well…. we have to stop the lip service to ASEAN India ties and actually negotiate this through,” Ambassador Gongsakdi added.

Maritime security, terrorism and cyber-security will be highlighted in the joint statement, along with the “3 C’s” of Commerce, Connectivity and Culture, officials said.