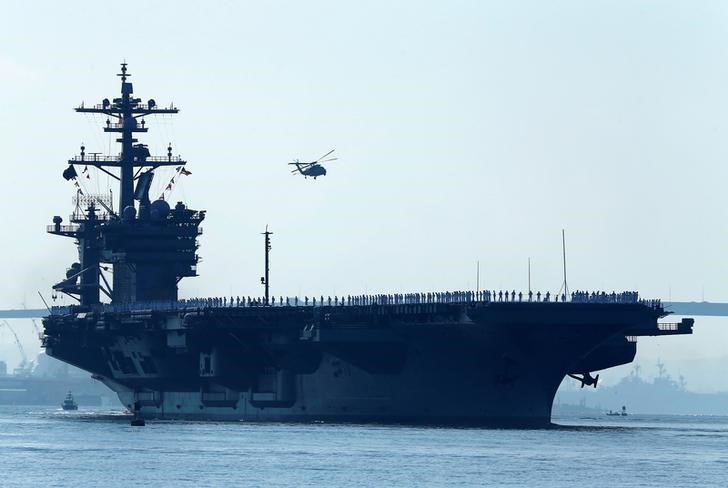 The Maritime Self-Defense Force kicked off joint drills with the U.S. Navy’s Carl Vinson aircraft carrier and its escorting vessels in the Western Pacific Ocean on Sunday, the Defense Ministry said, as the carrier strike group steamed toward the Korean Peninsula.

The MSDF destroyers Samidare and Ashigara, which departed the Sasebo naval base in Nagasaki Prefecture on Friday, were taking part in the exercises, said to be aimed at discouraging more missile and nuclear tests by North Korea this week.

North Korea was likely to be one of the main subjects of the talks.

MSDF destroyers held joint drills with the Vinson twice last month in the East China Sea, but tensions with nuclear-armed Pyongyang have hit a fever pitch as the isolated country prepares to mark the 85th anniversary of the founding of the Korean People’s Army on Tuesday.

That anniversary comes less than two weeks after the North staged a massive military parade in Pyongyang to celebrate the 105th anniversary of founder Kim Il Sung’s birth. The North has historically marked important anniversaries with provocative events such as missile launches or nuclear tests.

On Saturday, the Vinson-led strike group was expected to arrive in the Sea of Japan “within a matter of days,” U.S. Vice President Mike Pence said.

“Our expectation is that they will be in the Sea of Japan, in position, in a matter of days, before the end of this month,” Pence said during a joint news conference in Sydney with Australian Prime Minister Malcolm Turnbull.

Days earlier, there had been widespread confusion over the whereabouts of the strike group. The navy said it had initially been scheduled to depart Singapore for port calls in Australia, but was rerouted on April 8, reportedly toward waters off the Korean Peninsula as a demonstration of force to the North.

Trump boasted of the strike group in an interview earlier this month with the Fox Business Network, where he described it as “an armada.”

“We are sending an armada. Very powerful,” he said. “We have submarines. Very powerful. Far more powerful than the aircraft carrier. That I can tell you.”

The voyage from Singapore to the Sea of Japan was speculated as taking more than a week.

But photos posted to the U.S. Navy’s website on April 15 showed the carrier transiting the Sunda Strait, the passage between the Indonesian islands of Sumatra and Java — some 5,600 km from South Korea. It was later revealed that the strike group had in fact been completing a training exercise with the Australian navy.

The White House has denied that it offered misleading information on the whereabouts of the Vinson. Pence told the news conference, which was livestreamed online, that the decision to dispatch the Vinson to the waters off the Korean Peninsula “was set into motion some time ago.”

On Friday, the U.S. Navy revealed the approximate location of the Vinson in a statement announcing that a pilot of a fighter jet operating from the carrier was forced to eject in the Celebes Sea, south of the Philippines.