Arahmaiani, one of Indonesia’s most seminal and respected contemporary artists, was silent when asked to compare the country’s problems before and after the fall of the authoritarian New Order regime in 1998.

Until today, she still feels the pain of when she was forced to drop out of the Bandung Institute of Technology as a consequence of her poem about a just life, which was misunderstood as a challenge to the second president, Soeharto.

In 1983, she was arrested and interrogated for over a month. “I was brought to a place named Sumatra 37. In the Soeharto era, everyone who was sent to Sumatra 37 usually went missing,” she said.

“I was freed after signing a letter stating that I was mentally unhealthy,” the 56-year-old added while laughing.

After Soeharto stepped down, freedom of expression was allowed, yet injustices still prevail in different forms. This has recently been manifested in cases of religious intolerance, such as the recent demand for the demolition of religious statues, including a statue of the God of War Kongco Kwan Sing Tee Koen at the Kwan Sing Bio Chinese temple in Tuban, East Java.

“[In West Nusa Tenggara] they even disputed the statues which exist under the sea, that are not visible [from above],” she said.

Arahmaiani cannot be silenced. During the 2nd First Sight program at the Museum of Modern and Contemporary Art in Nusantara (Museum MACAN), she performed Handle without Care to highlight instances of injustice, including religious intolerance. 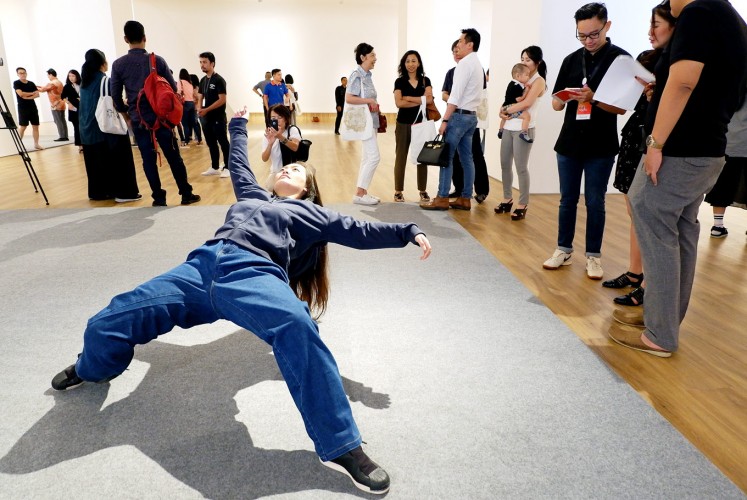 Xu Zhen’s In the Blink of an Eye (JP/A. Kurniawan Ulung)

At Indonesia’s first world-class modern and contemporary museum, five other artists also participated. They were Duto Hardono and Mella Jaarsma from Indonesia, Xu Zhen from China, Justin Shoulder from Australia and Heman Chong from Singapore.

Previously performed in New York in 2008, Handle without Care is one of Arahmaiani’s most important works. She has held 21 solo exhibitions and has taken part in 96 group exhibitions around the world since 1980.

Handle without Care begins with Arahmaiani walking slowly while holding incense, with a pair of sunglasses inserted on her kemben (breast cloth), and a toy gun and traffic stick tucked into her waist.

Clad in a yellow Balinese dress, she heads to a flour-covered circle with her kris at the edge of the circle and a Coca-Cola bottle in the center.

After arriving, she walks around the circle many times while performing different actions, ranging from dancing, sowing flowers, swinging her kris, playing with her traffic stick to shooting the Coca-Cola bottle with her toy gun.

According to Arahmaiani, the Coca-Cola bottle is the symbol of capitalism, which she says is an unfair economic system that benefits rich people while destroying local culture and the environment. Meanwhile, the white flour, which is the ingredient of instant noodles, represents consumerism.

“Now, you can see that floods and landslides happen everywhere,” she said.

She walks outside the circle to represent marginalized people, who she says are the victims of capitalism. She uses the toy gun to symbolize non-violent methods, in which to encourage people to stop committing violence with things that they disagree with in life.

Promoting peace is a long-lasting mission of Arahmaiani, who recently professed mixed feeling of anger and sadness after a man was burned to death by a mob after being accused of stealing three amplifiers from a mosque in Bekasi, West Java.

“Even if he was truly stealing, did he deserve to be burned? How much is those amplifiers,” she asked, questioning the mob’s conscience.

During her show, she alternately recites sacred utterance in Hinduism and Buddhism, Orthodox Christian prayers and Quranic verses in a bid to show the harmony of diverse religions and faiths in Indonesia. 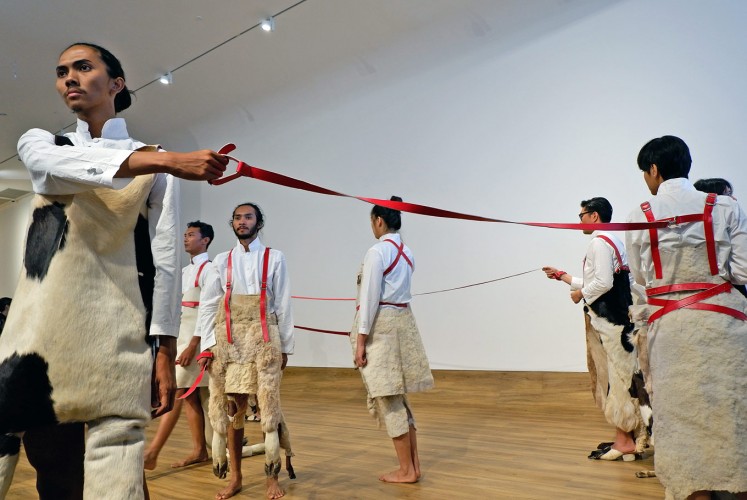 Like Arahmaiani, Mella Jaarsma also spoke up regarding injustice through her performance, Dogwalk.

The Yogyakarta-based artist criticized injustices caused by power relations, which she observed existed not only among fellow human beings, but also among animals, and in the relations between humans and animals.

Wearing costumes made of cowhide, lambskin and goatskin, 12 people pretended to be cows, lambs and goats. They performed with red leashes that connected to one another.

“Those skins come from animals who were sacrificed during Idul Adha [Day of Sacrifice],” she said.

The lashes, she said, were the symbol of power used by humans to control one another or animals.

“Why do we love a certain animal, but hate another? This animal is holy, but another is not. Dogs, for example. That’s hypocrisy,” she added. 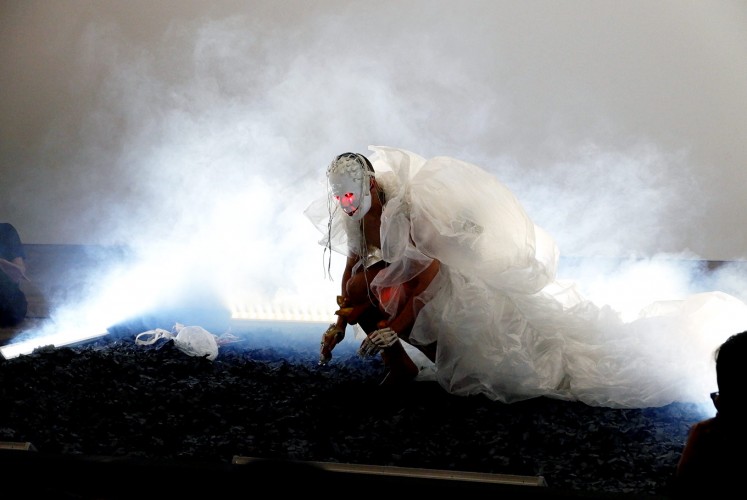 Made of handcrafted costumes and prostheses, Carrion has the ability to shapeshift into multiple forms and speak multiple languages

Through the actions of Carrion, Shoulder criticizes the condition when laws of nature rapidly change due to the destructive influence of humans.

Carrion: Episode 1, which contains nudity, strobe and smoke effects, draws on queer and bicultural ancestral mythologies with an aim to transport the audience into a place where the distant past collides with the far future.

Before opening its doors to the public on Nov. 4, Museum MACAN held art performances because they had the potential to encourage artists and their audiences to communicate ideas in a very direct way, according to Aaron Seeto, the Australian director of the museum.

“Art performance is an integral part of the development of contemporary art here in Indonesia and elsewhere,” he said. “Especially here in Indonesia, which is multicultural and multi-religious, art allows us to be tolerant.”

Founded by businessman and renowned collector Haryanto Adikoesoemo, Museum MACAN is home to over 800 works of modern and contemporary art. Around 50 percent of them are from Indonesia, 25 percent from the United States and Europe and 25 percent from the greater Asian region.

“This museum is about Indonesian culture, but we want to be an important bridge between Indonesia and the world,” he said.