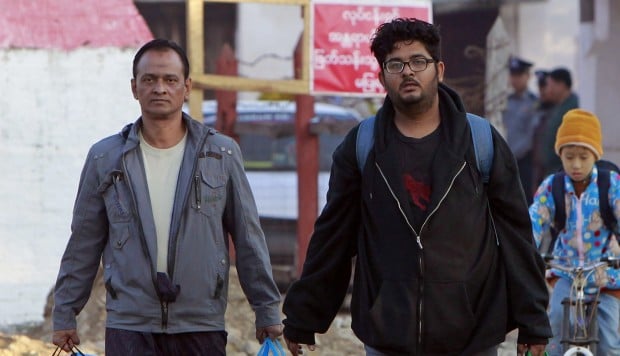 Foreign and local journalists jailed for flying a drone near Myanmar’s parliament were freed on Friday after spending two months in prison, in a case that spiked alarm over an increasingly dangerous climate for reporters in the country.

Lau Hon Meng from Singapore and Mok Choy Lin from Malaysia were on assignment for Turkish state broadcaster TRT when they were detained in late October along with Myanmar journalist Aung Naing Soe and driver Hla Tin while. The crew was shooting a documentary in Myanmar’s capital Naypyidaw.

Expecting to receive a fine, they confessed to flying the drone but were instead sentenced to two months in jail under Myanmar’s aircraft act.

They were freed from a jail north of the capital on Friday after a court dropped additional charges that carried between three and five more years in prison.

“They were all released this morning at 7am from Yamethin prison,” lawyer Khin Maung Zaw said.

Aung Naing Soe, the local reporter who spent his 27th birthday behind bars, said he was grateful to be freed and hoped other detained journalists would soon be released.

At least 11 reporters have been arrested in Myanmar in 2017. Several have been released but two Reuters journalists remain in custody and are facing up to 14 years in prison for allegedly possessing classified documents.

“I also hope and demand that the other similar cases like us … will be set free,” Aung Naing Soe said, adding that authorities have not returned his crew’s phones, computers or drones.

The group’s arrest came amid strained ties between Myanmar and Turkey, whose president has showered the mainly Buddhist nation with criticism over its persecution of Rohingya Muslims.

The UN has also accused Myanmar’s army of waging an ethnic cleansing campaign against the minority, some 655,000 of whom have fled an army crackdown for Bangladesh since late August.

TRT has not confirmed the subject of the documentary but said the reporters told Myanmar’s Ministry of Information about their filming plans in advance.

Their arrests deepened concerns about shrinking press freedoms under civilian leader Aung San Suu Kyi, who came to power in 2016 after decades of outright military rule.

Previous Pishin, Chaman chambers to support UBG candidates
Next End of an era: the cultural giants of Hong Kong who died in 2017