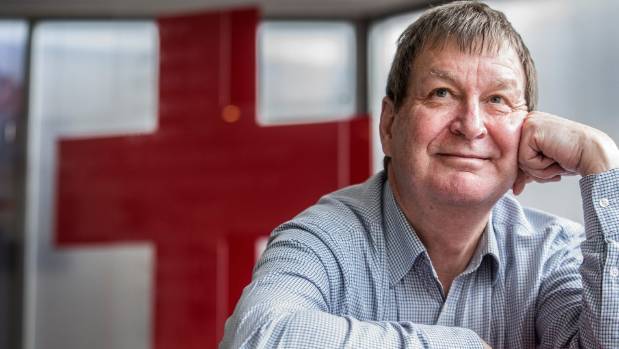 If disaster strikes, there’s one street in Tawa you might just want to wander on down to.

Andrew McKie, the Red Cross national and international disaster management officer, has corralled the folks in his neighbourhood into a full state of preparedness.

The former military man – he spent 21 years in the army – got the residents together over a barbecue to formulate a disaster plan.

“We have a 250 litre water tank, a BBQ, tents, tools, a satellite phone, a couple of hens which could provide eggs for everyone. A combined inventory means we are pretty well equipped.” 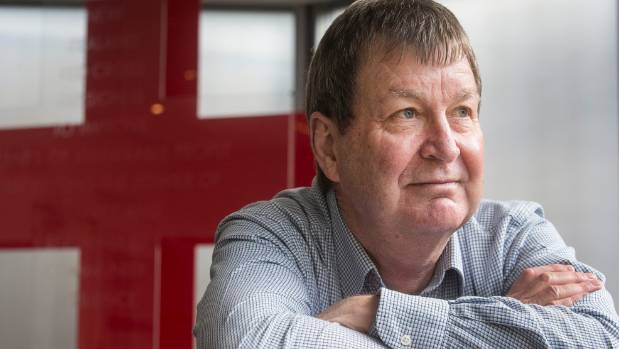 You can take the man out of the army…

True to his wordy title McKie is always ready for disaster to strike.

The grab-bag under his desk has wet weather gear, food, water, a Swiss army knife, a head lamp. Even his shoulder bag has an emergency supply of water, energy snacks and a torch in case he gets caught out between work and home.

And before you ask, no, he wasn’t a boy scout but he was always outdoorsy, bushwacking with his father and four brothers, building fires, making huts. Real Boy’s Own stuff.

McKie has been dealing with one disaster or another at the Red Cross for the past 22 years.

He has seen catastrophes of biblical proportions during that time as a field officer on the ground dealing with the aftermath of floods, cyclones, earthquakes and tsunami.

He recalls the big ones like they were yesterday: the 6.6 earthquake in Bam, south-east Iran, in 2003 that struck at 7am and killed more than 20,000 people, the population of the Hutt Valley.

The 2004 Boxing Day tsunami in the Indian Ocean that wiped out more than 230,000 people in 14 countries, pounding coastal communities with waves up to 30 metres high.

The stark reality of the plight of those who had lost their homes and livelihoods has stayed with him.

“When I got up there a few weeks after the 2004 tsunami people were living on their lawns or in temporary shelter. Disasters are a lot more than the first impact. For some people it goes on for years and years. It’s not about waiting for the Earthquake Commission to come and fix their house. They have nothing, they have to do it themselves.”

It’s the resilience of people, the compassion for their fellow man, that always astonishes him, he says.

Dispatched to Japan a few weeks after the devastating tsunami of 2011, he recalled the empathy of the hotel receptionist who, discovering he was a Kiwi, expressed her concern for the people affected by the earthquake in Christchurch a month earlier.

“Just 10 kilometres away there was this terrible disaster and here she was empathising with me about those affected by the Christchurch quake.”

Closer to home McKie has headed his 18 disaster welfare and support teams on a road show around the country this month with their ‘Good and Ready’ campaign, alerting Kiwis to the need for preparedness.

They have their work cut out. Apparently, despite the spate of big quakes the country has had in recent years, we have all become a bit complacent. It’s tough for some, he says. Those who live in lower socioeconomic areas are less keen to fork out for emergency kits. They are more worried about their day-to-day struggles than preparing for what might happen.

Despite his own preparedness, earthquakes still scare him.

Cyclones you can prepare for, tsunamis you are warned about; earthquakes you just have to endure, he says.

Born in Wellington, McKie remembers watching from Seatoun Beach the listing Wahine in April 1968. Disaster was a close companion even back then.

One of five sons of a radiographer-turned-Anglican minister, his family had a nomadic life, living on the Kapiti Coast, Marton, Wainuiomata and later Tawa.

After his less than brilliant School Certificate results he was told by careers advisers that there was no room in the academic world for him.

“I was told I could become a forestry cadet, a post office cadet or a regular force army cadet.”

The last was by far the most appealing option. “It sounded pretty exciting to me. I turned 16 and a few months later was up in Waiouru.

“It was tough, brutal even, but army life suited me. The Vietnam War was going on and we were keyed up to be the next lot to go over there.”

That wasn’t to be and McKie saw out 21 pretty peaceful years in the medical corps as a paramedic.

He did two tours of Singapore, where NZ had an infantry-based battalion. It was on his first tour that he met and married his wife of almost 40 years, Sam.

He left the army at 36, ready for another challenge, which came in the radically different form of running a beachside bar in Vanuatu.

The couple had been there on a couple of holidays and liked the lay of the land so, upping sticks with their young son and daughter, they moved to Port Vila.

Life slowed down to a leisurely pace. “We were never looking to get rich but it was a pretty good lifestyle. The biggest challenge was finding where you’d left your jandals the night before.”

In between long months of sunshine and cocktails they were hit by severe cyclones – 10 over three years.

McKie got used to battening down the hatches and tracking the cyclones, more fascinated by their power than fearful of their impact.

It was in Vanuatu that he was first commandeered by the local Red Cross to help with first aid training and disaster response.

He ended up being “chief executive of two staff on a local wage”.

When the family returned home three years later for the kids’ secondary schooling he was offered a job by the New Zealand Red Cross.

In fact it’s been 22 years and counting. Times have changed in those two decades.

A lot of their appeal work is done through social media now. Online donations have overtaken cheques in envelopes and via 0800 numbers.

When not dealing with disasters, McKie retreats to his hideaway house in Otaki, a 10 metre square house set among native bush and accessed by a suspension bridge.

It’s the family’s off-grid bolt-hole, one they have used a lot in the wake of the sudden death of his 34-year-old daughter, Kimberley, two months ago.

She loved it up there, says McKie. It was a place where she felt at home and at peace.

It’s a quiet, reflective spot. There’s a log fire for heat, gas for cooking and solar power for lighting.

There are pheasants, deer, wild pigs. Plenty of mobile food should disaster strike.