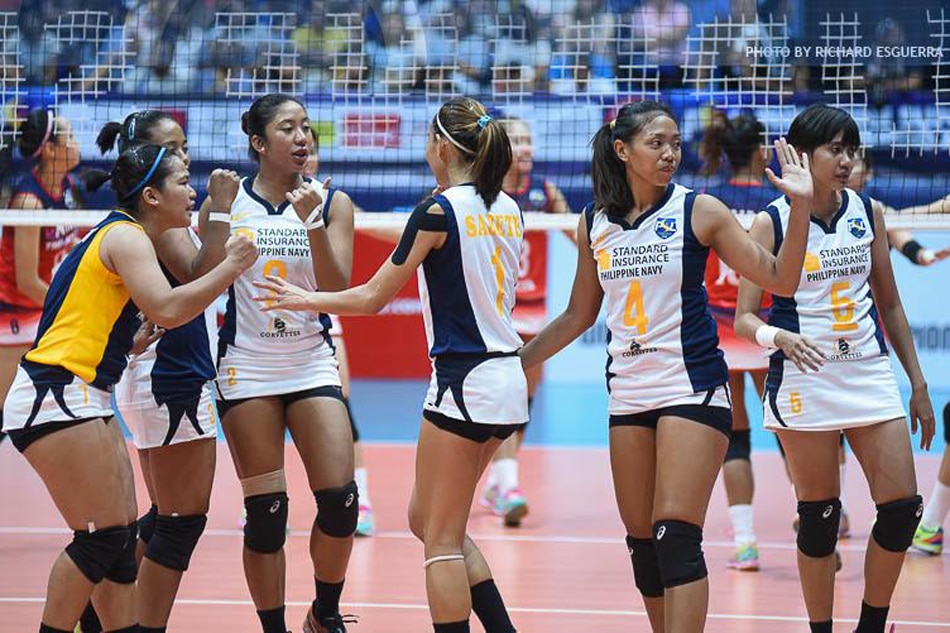 After a strong start, the Corvettes slumped in the third set but recovered in the fourth to pummel Amy’s and finish their campaign on a winning note.

Pau Soriano led the charge for Navy, while Hezzymie Acuna and Carissa Martinez also shone, as Navy claimed their fourth win of the conference and avoided a last-place finish in their debut campaign in the league.

Soriano, the former Adamson University star, finished with 18 points built on 15 kills, while Martinez and Acuna had 10 points each.

Lilet Mabbayad anchored the Navy defense, as three of her nine points came off kill blocks.

“Our target was to make the top four,” said Standard Insurance-Navy coach Nene Chavez. “Although we failed to hit our target, I am still happy and proud of my team.”

“We gained maturity and confidence to face the best volleyball players in the country,” Chavez added. “Who knows, maybe things would get better next conference.”

Chavez, a member of the team that won the Southeast Asian Games gold in Singapore in 1993, said Navy discovered its groove in the classification phase following victories over Cignal and Amy’s.

“We started to play well in the second round. But it’s okay. I told the team that the important thing is that we learned something and we enjoyed every single game,” she added.

Powered by Soriano, the Corvettes were rock solid in the first two sets, while Amy’s struggled with errors and subpar defense.

Chavez opted to send her young players in the third set, allowing Amy’s to recover and steal the frame.

“I wanted to give them experience,” Chavez said of her younger players. “But we paid dearly for that experiment as Amy’s gained experience after seeing that the veterans were resting.”

It was all Navy in the fourth set, however. The Corvettes raced to a 16-6 lead entering the second technical timeout, and though a couple of unforced errors gave Amy’s some extra points, Mabbayad scored on a block, and Soriano delivered an ace to seal the victory.

Lourdes Clemente and Jowie Verzosa finished with 11 and 10 markers, respectively, for Amy’s.

Previous Kenyan runners again romp home in Standard Chartered KL Marathon
Next Long autoroute trip? Then stop off for a rummage in a …