With the kind of fanfare that only a totalitarian state can muster, North Korea on Saturday flaunted missiles that can theoretically reach the United States and defiantly stated that it was prepared to counter any US attack with “a nuclear war of our own.”

But it soon looked like a case of style over substance. North Korea somewhat ruined the impression created with the parade, which took place on the most important day of the year for Kim Jong Un’s regime, with a failed missile launch less than 24 hours later.

The ballistic missile was fired from the Sinpo area on the east coast shortly before Sunday, 6am local time, US Pacific Command said. It blew up almost immediately, complicating efforts to identify the missile’s size and range.

North Korea fired a land-based version of its medium-range, submarine-launched ballistic missile from the same area earlier this month. That exercise also failed.

The missile was fired just minutes after US Vice President Mike Pence took off from Alaska on his way to Seoul, where he is expected to issue a strong warning to North Korea to stop its provocative behaviour or face consequences.

Pence was briefed on North Korea’s failed missile launch within an hour of departing from Anchorage, where Air Force Two stopped to refuel. He was in contact with US President Donald Trump, aides told reporters travelling with the vice president. North Korea has reportedly launched a missile on its east coast which has failed.

As tensions with North Korea escalated heading into the weekend, Trump spent Friday and Saturday mornings golfing at his private club in West Palm Beach, Florida, greeting members after he returned from the green, according to someone who saw him.

The president seemed to be hoping for a calm weekend. He was joined on his trip by just three junior staffers and KT McFarland, a deputy national security adviser who was recently pushed out and made ambassador to Singapore as a consolation. Many of Trump’s White House aides were given the weekend off.

Trump had nothing to say about the launch, said US Secretary of Defence Jim Mattis. “The president and his military team are aware of North Korea’s most recent unsuccessful missile launch,” Mattis said in a statement. “The president has no further comment.”

The missile was launched into the sea off the east coast of the Korean Peninsula, where a US Navy strike group is patrolling. Military commanders ordered the group, led by the aircraft carrier USS Carl Vinson, back to the area this month as tensions with North Korea mounted.

The group has the ability to shoot down incoming missiles and launch missiles of its own.

Although the missile in Sunday’s attempt – like others before it – exploded shortly after launch, experts warn that North Korea’s rocket scientists learn something from failures as well as successes, giving them information they can use to hone their technology. 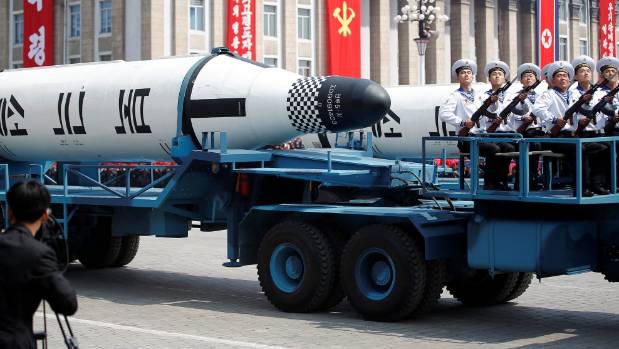 Certainly, the military hardware paraded through Pyongyang on Saturday shows that Kim is unrelenting in his quest to develop a missile capable of reaching the United States.

Experts were stunned at the sheer number of new missiles on display during the parade – including, apparently, a new and previously unknown type of intercontinental ballistic missile.

“It’s not like not doing a nuclear test was good news – this is all part of the same program,” said Jeffrey Lewis, head of the East Asia program at the James Martin Centre for Nonproliferation Studies in California. North Korea has claimed to be able to make nuclear weapons small enough to be able to fit on a missile.

The two-hour-long parade took place on a day officially known as the “Day of the Sun,” the anniversary of the 1912 birth of Kim Il Sung, North Korea’s founder and the current leader’s grandfather.

North Korea is looking for trouble. If China decides to help, that would be great. If not, we will solve the problem without them! U.S.A.

A relaxed Kim Jong Un stood smiling on a balcony as untold tens of thousands of soldiers marched past, planes in a formation making 105 – for the anniversary – flew overhead and missile transporters rolled through the square in front of him.


He did not look like a man worried about a strike ordered by Trump, like that in Syria earlier this month, or concerned about China’s increasing anger over his belligerence.

“We will respond to an all-out war with an all-out war and a nuclear war of our own,” Choe Ryong Hae, one of Kim’s top aides, said in a speech at the parade, as the 33-year-old leader looked on.

Kim said in his New Year’s address that North Korea was in the “final stage” of preparations to test-launch an intercontinental ballistic missile, or ICBM. That prompted Trump to tweet in response: “It won’t happen!”

But Kim appeared to demonstrate on Saturday that he is in the process of making it happen.

North Korea has previously shown off at these parades two kinds of ICBMs, the KN-08 and the KN-14, both with the theoretical capacity to reach the US mainland. 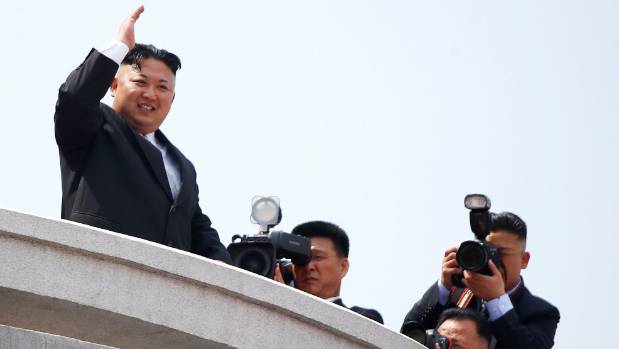 Saturday’s parade included the same vehicles as in the past, but instead of carrying missiles they were carrying huge, previously unseen missile canisters. Those could have contained the KN-08 and KN-14, or something else – or nothing at all.

But the message was clear.

“This was a promise of future capabilities more than a demonstration of existing missiles,” said Joe Cirincione, president of the Ploughshares Fund, which tries to stop the spread of nuclear weapons. “We do not know if there is actually an ICBM in that canister. But it is certainly coming.”


In a show of force at a time of rising tensions with the US, North Korea has showcased its new missile arsenal to the world.

By using solid fuel, North Korea can roll out its missiles from a hangar or tunnel ready to launch, rather than having to fuel them on a gantry like the older liquid-fueled rockets. That allows much less time for the missiles to be detected by satellites.

North Korea has been using this technology for its submarine-launched ballistic missile, which Kim boasted was “the greatest success,” and the land-based variant, tested earlier this month but less successfully. Both types of missiles were displayed in the parade Saturday. US President Donald Trump put North Korea “on notice” over its missile programme. A move that has done nothing to dampen Pyongyang’s actions.

But that wasn’t all. Although experts were continuing to analyse footage from the parade, it appeared that North Korea had shown off a third and previously unknown ICBM.

The black-and-white missiles looked like KN-08s but were slightly smaller. They were rolled out on vehicles usually used for the medium-range Musudan missile, which North Korea tested a barrage of last year. The aircraft carrier USS Carl Vinson led a US fleet back to the east coast of the Korean Peninsula as tensions with North Korea mounted.

But rather than being concerned that North Korea potentially had a new weapon that could reach the United States, Michael Elleman, senior fellow for missile defense at the International Institute for Strategic Studies, saw something encouraging.

“This could signal some confusion in terms of where they want to go with their long-range systems,” he said, noting that it could mean North Korea has not finalised the design of its ICBM.

Elleman said he could not believe that North Korea had been able to master the technology necessary to launch even one stage of a two- or three-stage ICBM.


North Korea holds a large military parade after US sends warships to the region. Is the Korean peninsula headed for war?

“Until they’ve fixed the Musudan, they’re not going to get anywhere,” he said. North Korea launched a series of medium-range Musudan missiles last year – thought to be designed to become a stage in an ICBM – and all but one failed.

North Korea has never launched an ICBM, but given how difficult the technology is, it would almost certainly fail on its first test, experts say.

Markus Schiller, a German aerospace engineer who specialises in missiles, also cast doubts on how much progress North Korea was making.

But even if North Korea does not yet have the technical capacity to launch a missile capable of reaching the United States, it has clearly demonstrated that it has the political will.

“It’s alarming that they are pouring so much money and resources into this program,” Elleman said. “Eventually, they are going to be successful.”