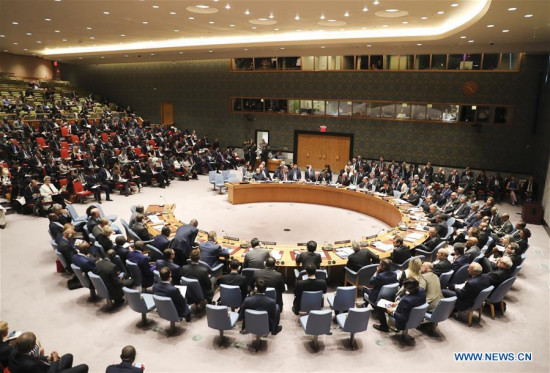 Photo taken on Sept. 20, 2017 shows a UN Security Council meeting on the reform of UN peacekeeping at the UN headquarters in New York. (Xinhua/Wang Ying)

The 72nd UN General Assembly general debate — the annual VIP session — ended on Monday, with concern over nuclear weaponry on the Korean Peninsula and the Rohingya refugees in Myanmar among the leading topics.

But they failed to foresee U.S. President Donald Trump’s heated response to threats from the Democratic People’s Republic of Korea (DPRK) to attack the United States, the return threats and reaction.

Trump said that if Washington “is forced to defend itself or its allies, we will have no choice but to totally destroy North Korea.”

Many nations voiced offense that such a direct threat would be voiced from the podium in the house of diplomacy.

On Saturday, Foreign Minister Simon Coveney of Ireland was one of those who objected to such rhetoric, saying he “unreservedly condemns the recent series of missile and nuclear weapons testing by the DPRK.”

“I will be followed today on the podium by the representative from the DPRK and I would urge him to de-escalate the provocative language and tensions of this week,” he said. “This is a conflict that the world does not need and that we need to move away from.”

While his plea was greeted by applause, the succeeding speaker, DPRK Foreign Minister Ri Yong-ho appeared not to have heard it.

He called the U.S. president “a mentally deranged person full of megalomania and complacency, the person who is chastised even by American people as ‘Commander in Grief,’ ‘Lying King,’ ‘President Evil.'”

Trump, in his speech on Tuesday, had another state in his cross-hairs for its nuclear ambitions.

“The Iran (nuclear) deal was one of the worst and most one-sided transactions the United States has ever entered into,” he said. “Frankly, that deal is an embarrassment to the United States, and I don’t think you’ve heard the last of it.”

It wasn’t the last heard of the 2015 accord during the debate since several nations, including the Group of 77 plus China, want to see the Iran deal succeed.

Among those are the partners in the agreement with the United States.

The accord was reached between the “P5+1” and Iran. That is, the permanent five (P5) veto-wielding members of the Security Council of Britain, China, France, Russia and the United States, plus Germany.

On Myanmar, Foreign Minister Vivian Balakrishnan of Singapore said on Saturday he had spoken with Councilor Aung San Suu Kyi, de facto leader of Myanmar, the week before last about the refugee crisis caused by Rohingyas fleeing Rakhine State for neighboring Bangladesh. Some speakers suggested it amounted to ethnic cleansing.

Aung San Suu Kyi, a Nobel laureate, had announced days before the UN debate that she would not be attending the UN meeting.

Balakrishnan called the home of the Rohingyas “a humanitarian disaster” and said foreign ministers of the Association of South East Asia Nations (ASEAN) were taking up the crisis, “a complex inter-communal issue with deep historical roots.”

“ASEAN supports Myanmar seeking a long-term solution to restore stability,” Balakrishnan said, adding that “Singapore will work with ASEAN and Myanmar to extend humanitarian assistance to all affected communities.”

On Monday, Myanmar denied ethnic cleansing in Rakhine, saying Rohingya rebels conscripted Muslim men and intimidated women and children to flee into neighboring Bangladesh to call attention to their cause.

“Let me be clear there is no ethnic cleansing; there is no genocide, said Hau Do Suan, the Myanmar ambassador to the United Nations, speaking at the end of the annual UN General Assembly general debate, exercising his right of reply “to the irresponsible remarks made about my country.”

Nuclear weapons and refugees were far from the only concerns voiced among the 196 speakers during the week-long debate. Nearly every state expressed problems it was dealing with. It was the first time in 11 years all 193 member states plus the three observers — Palestine, the Holy See and the European Union — have spoken.

Almost every speaker taking the podium in the great hall of the assembly preceded their remarks by expressing condolences for the victims of the Mexico earthquake and the hurricanes that lashed Florida and Texas in the United States and several island states in the Caribbean.

“I come to you straight from the front line of the war on climate change, said an emotional Prime Minister Roosevelt Skerrit of Dominica, ignoring the general advice not to link single weather events with climate change. “I have left my bleeding nation to be with you … because these are the moments for which the United Nations exists!”

“To deny climate change is to procrastinate while the earth sinks; it is to deny a truth we have just lived! It is to mock thousands of my compatriots … without a roof over their heads … in fear of sudden mudslides and what the next hurricane may bring,” he said.

“We, as a country, and as a region, did not start this war against nature! We did not provoke it! The war has come to us!” he added.

Previous School assessments: Why it is time now to empower the teacher in early grades
Next Halloween Horror Nights to be held at Universal Studios S…