Oil dips away from 2015 highs as rising U.S. output weighs on outlook 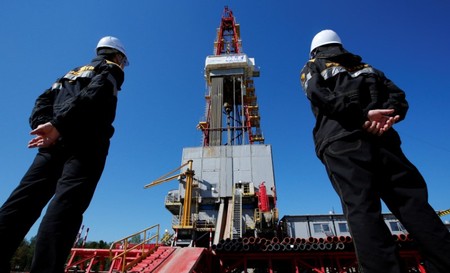 Oil prices on Friday dipped away from 2015 highs reached the previous session, weighed down by rising U.S. output and the expected January re-opening of the Forties pipeline in the North Sea.

Dealt volumes of crude futures were declining fast as traders closed positions ahead of upcoming Christmas and New Year breaks.

The dip on Friday was largely due to an outlook for rising supplies which triggered traders to sell out of long positions ahead of year-end.

Jeffrey Halley, senior market analyst at futures brokerage Oanda in Singapore said there was “a lack of momentum as the holiday season subdues trading volumes”.

Weighing on the oil price outlook more fundamentally is the expected return of the 450,000 barrels per day (bpd) Forties pipeline system in the North Sea in January.

The pipeline, which delivers crude underpinning Brent futures contracts, shut down earlier this month due to a crack. Operator Ineos said on Thursday it expected to complete repairs around Christmas and would gradually restart the system in early January.

“Supply is expected to grow further, paving the way to an oversupplied market, which can again exercise downward pressure on oil prices,” consultancy Rystad Energy said in a note.

“In 2018 Rystad Energy estimates the (oil) liquids supply to grow around 1.9 million bpd … The return of OPEC volumes after the current cut agreement has expired, coupled with continued strong output growth from North American shale, could result in an oversupplied market in 2019, again putting downward pressure on oil prices,” Rystad said.

The pact to withhold supplies started in January this year and is set to expire at the end of 2018.