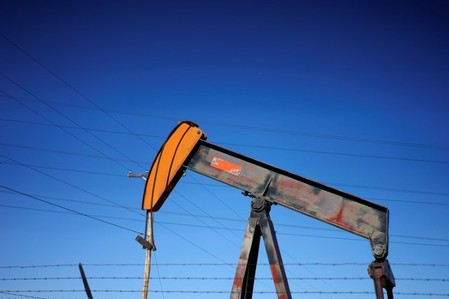 Oil prices ended little changed on Tuesday and edged lower after hours when an industry group reported a bigger-than-expected build in U.S. crude inventories that pressured prices along with large draws in refined products that lent support.Investors were cautious ahead of the results of the U.S. presidential election Tuesday night, and that staved off large price fluctuations.U.S. crude stockpiles rose 4.4 million barrels in the week to Nov. 4, according to the American Petroleum Institute (API). Analysts polled by Reuters had forecast a build of just 1.3 million barrels. [EIA/S]Inventories of refined products fell sharply, with gasoline down 3.6 million barrels and distillates down 4.3 million, API data showed.Brent <LCOc1> futures edged down 26 cents, or 0.6 percent, to $46.04 a barrel at 5:09 p.m. (2200 GMT)U.S. crude <CLc1> was 6 cents, or 0.1 percent, at $44.83 per barrel.“It seems we’re seeing refinery utilization pulling back a little here,” said Matt Smith, director of commodity research at energy data provider ClipperData. “The bearishness of the crude number has been tempered by the magnitude of the draws to the products.”API’s data came ahead of the U.S. government’s Energy Information Administration’s (EIA) official inventory data on Wednesday.Smith said crude prices should move on Wednesday, influenced by the EIA numbers and the U.S. election result.Most investors believe a victory by Republican candidate Donald Trump over Democrat Hillary Clinton would prompt uncertainty and instability in financial markets.“Everyone is on hold to see what happens in the election. There was too much uncertainty for the market to develop a clear direction in price,” said James Williams, president of energy consultant WTRG Economics in Arkansas.Brent crude’s premium to the U.S. West Texas Intermediate (WTI) futures contract <WTCLc1-LCOc1> declined on Tuesday to its lowest level in almost five months. Projections of record OPEC output put more pressure on Brent than on U.S. crude.The Organization of the Petroleum Exporting Countries (OPEC)forecast demand for its oil will rise in the next three years, suggesting its 2014 decision to let prices fall has boosted its market share. [OPEC/M]The group meets on Nov. 30 and has pledged to reach a deal on cutting output to boost prices.But several member states have asked to be exempt from any deal. Along with questions over the likelihood of non-OPEC rival Russia joining in, this has created doubt about OPEC’s ability to deliver a meaningful cut.(Additional reporting by Amanda Cooper in London and Henning Gloystein in Singapore; Editing by Marguerita Choy, Chris Reese and David Gregorio)By Scott DiSavino and Ethan Lou

Previous 大選今揭盅美股亢奮慎防散水
Next Dimsum kicks off in style