Oil From the U.S. and Saudis: Top Buyers Get What They Want

Buyers in the world’s biggest oil market are finding they can almost always get what they want, at a time when they weren’t expected to get what they need.

Saudi Arabia, which is cutting output as part of a deal to ease a global glut, was said to supply customers in Asia with all the oil they sought for May, keeping with its strategy of largely sparing them from the curbs. Meanwhile, U.S. exports have surged to nations including China and South Korea while refiners in the region are also binging on African and European North Sea crude.

This free flow of oil signals the high value placed by producers on sales to Asia, which is the center of global demand growth. When the Organization of Petroleum Exporting Countries and its allies began implementing their output-cut agreement in January, regional buyers were concerned about losing access to the wide array of cargoes that were available over the past three years amid a global glut. Instead, the reductions have largely affected refiners in the Americas and Europe.

“There’s no shortage of crude for refiners in Asia,” said Peter Lee, a Singapore-based analyst at BMI Research. “Asia remains the single largest oil-importing region globally, and producers in the Middle East are prioritizing their sales to the region over European and U.S. markets even as the OPEC and non-OPEC producers’ pact remains in place.”

What’s more, the cuts have made supply from nations not part of the deal such as the U.S. more affordable. “Flows of oil from West Africa, the U.S. and North Sea are cost-competitive against Middle Eastern grades as OPEC, non-OPEC compliance to the supply cut has made Middle Eastern barrels more expensive,” said Lee. 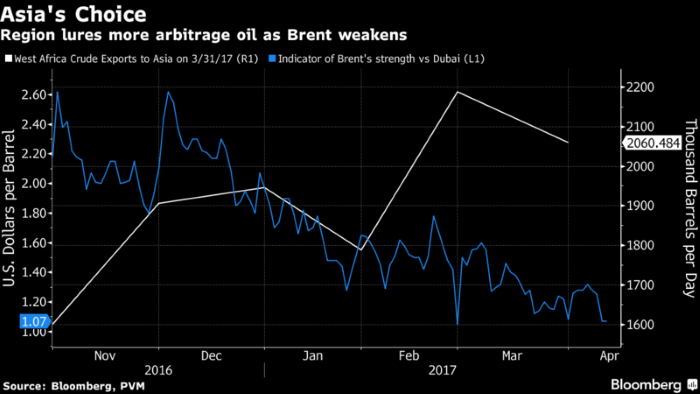 Even during the times that Saudi Arabia, the world’s biggest crude exporter, has implemented limited supply cuts to some buyers in Asia, it has reduced cargoes of heavier varieties while providing more of the lighter grades that are similar to rival shipments from the U.S., Africa and Europe.

Other regions haven’t been so lucky. Saudi Arabia was said to maintain a 20 percent cut to at least one European refining company for a second month for February. U.S. imports of oil from the Middle East kingdom fell to the lowest level since December, according to preliminary data from the U.S. Energy Information Administration for the week ended March 31.

While Saudi shipments to the Americas and Europe are curbed, U.S. crude exports in February reached a record high. U.S. cargoes flowing to China, Japan and Singapore totaled 11.41 million barrels that month, more than doubling from 5.63 million barrels in January, data released by the U.S. Census Bureau show.

“Asia remains the most attractive market for global suppliers due to the current open arbitrage,” said Den Syahril, a Singapore-based analyst at industry consultant FGE. “With supplies in the Atlantic rising faster than demand, it has created a supply push into Asia.”

The benchmark for Middle East supplies, Dubai crude, has strengthened relative to other markers as the region’s producers including Saudi Arabia shoulder most of the global output curbs. Dubai has averaged $1.35 a barrel higher than U.S. West Texas Intermediate so far this month, after flipping from a discount in December. Brent crude’s premium to Dubai has narrowed to the weakest since August 2015. The spread was at 95 cents at 10:56 a.m. Singapore time on Thursday.
Source: Bloomberg

Previous Youth booked for leaking intimate pictures of girl online
Next Global Outdoor Flooring Market Projected to Be Worth USD 109.8 Billion by 2021: Technavio