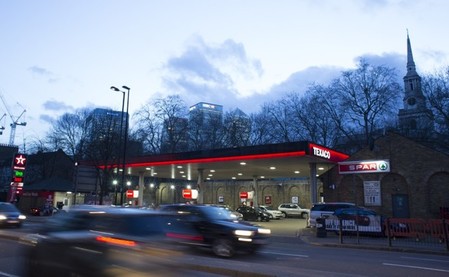 Oil prices were on track for their largest weekly advance in more than a month on Friday, supported by planned OPEC output cuts, but profit-taking after a two-day rally kept benchmark crude contracts below the key $50-per-barrel mark.Both Brent and U.S. crude’s West Texas Intermediate (WTI) futures showed gains of 7 percent or more on the week after the Organization of the Petroleum Exporting Countries surprised oil traders and investors on Wednesday with a preliminary agreement to remove some 700,000 barrels per day (bpd) from the market.On Friday, the two benchmarks diverged.Brent’s front-month contract for November <LCOX6> was down 29 cents, or 0.6 percent, at $48.95 a barrel by 1:02 p.m. EDT (1702 GMT) ahead of its expiry at Friday’s settlement. For the week, it was up 7 percent, its biggest gain since the week ended Aug. 19.WTI’s front-month <CLc1> rose 24 cents, or 0.5 percent, to $48.07 per barrel. It gained 8 percent on the week, also the most in six weeks.For the quarter, Brent fell 1.5 percent and WTI was down about 0.5 percent.While profit-taking had weighed on oil on Friday, the market’s downside was also limited by a rise in U.S. stocks and a drop in the dollar after weak U.S. consumer spending data suggested the Federal Reserve might be cautious in raising interest rates in the near term. [.N]OPEC said it has achieved agreement in principle to cut output to between 32.5 million bpd and 33.0 million bpd from about 33.5 million bpd, estimated by Reuters to be August’s production level.Production quotas for each member and other details will be finalized at the group’s policy meeting in November, OPEC officials said.A persistent oil supply glut has caused a sharp drop in crude prices from mid-2014 highs above $100, forcing OPEC into the cuts.Russia, not an OPEC member but a large producer pumping crude at record highs, said it would find a way to freeze production if it manages to reach a deal with OPEC.The United States, also a non-OPEC member and now the biggest oil producer, said it had little faith the plan would work. Amos Hochstein, the U.S. energy envoy, said in a Reuters interview that price gains from the cuts would trigger higher U.S. production that ultimately defeats the deal.A weekly reading on the U.S. oil rig count showed local drillers added 95 rigs for the third quarter, the most in any quarter since 2014. [RIG/U](Additional reporting by Keith Wallis in Singapore and Osamu Tsukimori in Tokyo; Editing by Marguerita Choy, David Goodman and Paul Simao)By Barani Krishnan