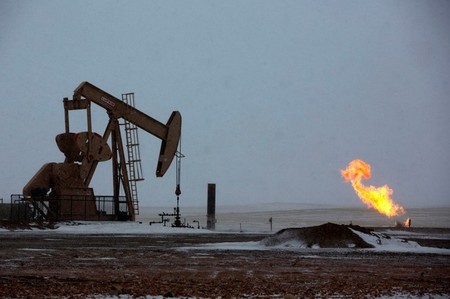 Oil prices fell on Thursday after news that two key oilfields in Libya had restarted, pumping crude for export into an already bloated market.

Libya’s Sharara oilfield, with a production capacity of almost 300,000 barrels per day (bpd), has restarted after the end of protests by an armed group that had blocked pipelines there, a Libyan oil source and local official said on Thursday.

The oil source said El Feel oilfield, with a capacity of about 90,000 bpd, had also restarted.

The oil market has found some support from plans by major exporters to extend output cuts.

The Organization of the Petroleum Exporting Countries and Russia have agreed to cut output by 1.8 million bpd in the first half of the year to tighten the market and prop up prices.

OPEC Secretary-General Mohammad Barkindo said on Thursday that a global oil overhang was declining, but he added that stocks remained high and needed to fall further.

OPEC is discussing extending its cuts into the second half of the year, but the group has an uphill task.

U.S. data on Wednesday showed a drop in crude stocks, but gasoline inventories surged as refiners produced more fuel than the market could consume.