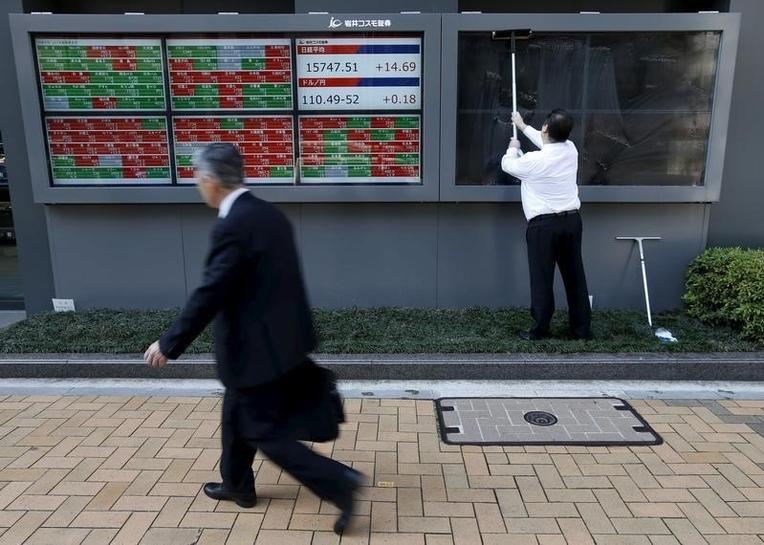 A man (R) cleans electronic boards showing the Japan’s Nikkei average, the exchange rate between Japanese yen against the U.S. dollar and stock quotation outside a brokerage in Tokyo, Japan, April 6, 2016.

SINGAPORE Oil prices remained near 2016 highs in early trading on Thursday, buoyed by a fall in U.S. crude inventories, a weaker dollar and strong demand, but some analysts warned that the recent rally was starting to look overblown.

International Brent crude oil futures LCOc1 were trading at $52.70 per barrel at 0045 GMT, up 19 cents from their last close.

Traders said the price rises were largely a result of a drop in U.S. crude oil inventories.

A weaker dollar, down around 2.4 percent this month against a basket of other currencies .DXY, makes dollar-traded fuel imports for countries using other currencies cheaper, also supporting oil prices, traders said.

But some analysts said there were also signs that the recent oil price rise, which saw Brent rally 6 percent this month and prices virtually double since February to one-year highs, may be overblown.

ANZ bank said that price rises were “tempered by an increase in crude production of 10,000 barrels per day to 8.75 million barrels per day and the number of active rigs increasing by 9 to 325”.

Traders also warned of an ongoing build in refined product stocks in the United States and Asia.

With fundamentals weighing both for and against higher prices, many traders and analysts say that a price tag of $50-60 for a barrel of crude was a fair value for oil, reflected in Brent’s forward curve which stays within that range until early 2021.