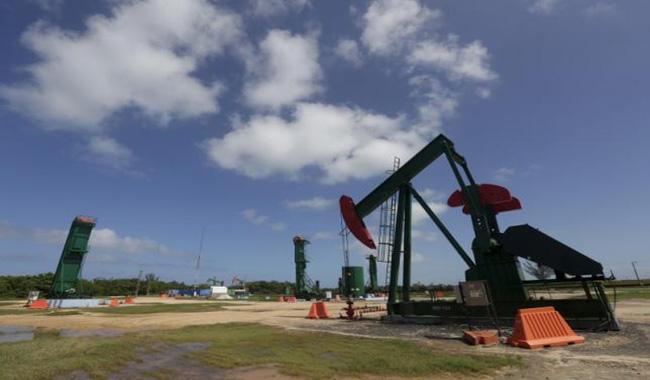 SINGAPORE: Oil prices rose in early Asian trade on Thursday, rebounding on a weaker U.S. dollar after falling around 3 percent or more in the previous session following a surprisingly large build in U.S. crude and distillate stocks last week.

“The weaker dollar is providing support for oil prices today. The direction of oil prices is governed by supply and the strength of the dollar,” said Jonathan Barratt, chief investment officer at Sydney’s Ayers Alliance.

The U.S. dollar index slipped against a basket of currencies on Thursday. A weaker dollar makes greenback-denominated commodities including oil cheaper for holders of other currencies.

That came after U.S. crude inventories rose 2.3 million barrels to 1.221 billion barrels in the week to Aug. 26, data from the Department of Energy’s Energy Information Administration showed on Wednesday. That compared with analyst expectations of a 921,000-barrel increase.

Distillate stocks, which include diesel and heating oil, unexpectedly rose by 1.5 million barrels, while gasoline inventories fell by 691,000 barrels, about half the forecast drawdown.

“In the absence of any price shocks, oil prices remain rangebound – as soon as oil gets down to the lower end of $40 a barrel prices find support. When oil gets down to $40-$42 investors buy, when it gets to $48-$50 they sell again”, Barratt said.

Speculation the Organization of the Petroleum Exporting Countries and other oil producers might agree to curb output at talks in Algeria later this month helped fuel an 11-percent rise in crude prices in August, the best monthly return since April.

But optimism of an output freeze has since waned.

“The market is very complacent on whether OPEC can come up with a supply freeze deal. The market doesn’t believe OPEC has the ability to achieve an agreement freezing supply,” Barratt added.

Investors are also waiting for U.S. non-farm payroll data on Friday to give the market direction, ANZ Bank said in a note.