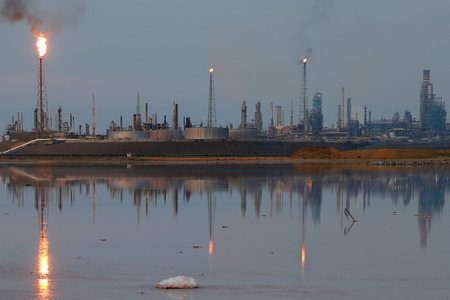 Oil prices dipped on Thursday but stayed close to their highest in 2-1/2 years, as data showed strong demand for crude imports in China and on increased refining activity in the United States that drew more crude from inventories.

Trading was typically thin at year end, with many traders on vacation.

U.S. refining runs increased, pushing overall capacity use among the nation’s refiners to 95.7 percent, highest in December dating to 1998, according to the U.S. Energy Department. Refiners have profited in recent months as the spread widened between U.S. crude and Brent futures prices.

Oil markets have tightened after a year of production cuts led by Middle East-dominated Organization of the Petroleum Exporting Countries (OPEC) and Russia. OPEC cuts kicked off last January and are scheduled to continue throughout 2018.

In the most recent week, U.S. production dipped modestly to 9.75 million bpd from 9.79 mln bpd the previous week.

Pipeline outages in Libya and the North Sea have also supported prices. Libyan oil supplies were disrupted by an attack on a pipeline this week and flows towards the port of Es Sider were reduced by about 70,000 bpd on Thursday.

In the North Sea, the 450,000 bpd capacity Forties pipeline system was shut this month after a crack was found.

Both pipelines are expected to return to normal operations over the new year or in early January.

For a graphic on Global oil supply and demand, click: http://reut.rs/2C9rqyC

For a graphic on Crude oil trading, click: http://reut.rs/2BJPSTL