Oil up 2 percent despite U.S. crude build; set for best third quarter since 2004 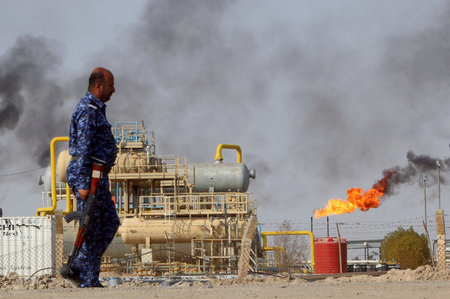 Oil prices settled up 2 percent on Wednesday despite a rise in U.S. crude inventories, with the market heading for its largest third-quarter gain in 13 years after the Iraqi oil minister said OPEC and its partners were considering extending or deepening output cuts.

Crude prices were on course for a nearly 16 percent rise this quarter, which would make this year’s performance the strongest for the third quarter since 2004.

Crude inventories rose for a third straight week, building by 4.6 million barrels, about a million more barrels than forecast.

“The impact of Hurricane Harvey can still be seen in today’s larger-than-expected build in the U.S. commercial crude stockpile,” said Abhishek Kumar, Senior Energy Analyst at Interfax Energy’s Global Gas Analytics in London. “However, this has had limited impact in dissipating the bullish sentiment prevailing in the market.”

However, U.S. crude remains rangebound around $50.

The Brent/WTI spread WTCLc1-LCOc1 widened 36 cents to settle at negative $5.60. Because of the depressed price of U.S. crude compared to Brent, the spread is now the widest in more than two years.

“The hurricane widened it out,” said Rob Haworth, senior investment strategist at U.S. Bank Wealth Management, pointing out that U.S. inventories and global inventories have different narratives because of Harvey.

“If I look at this week’s EIA data, post hurricane … the refined products drawdown implies that refineries are not yet back to normal,” he said. “They’re not replacing inventories for current demand.”

On Friday the Organization of the Petroleum Exporting Countries and other producers will meet in Vienna to discuss the progress of their deal to limit output.

The group is considering a range of options, including an extension of cuts, but it would be premature to decide on what to do beyond the agreement’s expiry in March, Iraqi oil minister Jabar al-Luaibi told an energy conference on Tuesday.

OPEC and non-OPEC producers including Russia have agreed to reduce output by about 1.8 million barrels per day (bpd) until March to reduce global oil inventories and support prices.

Some producers think the pact should be extended for three or four months, others want it to run until the end of 2018, while some, including Ecuador and Iraq, think there should be another round of supply cuts, al-Luaibi said.

“The market will be monitoring [the meeting] closely, to see if they’re including Nigeria and Libya,” said Tony Headrick, energy market analyst at CHS Hedging. “Cuts have been relatively well implemented recently and early thoughts are that they’re going to maintain those cuts.”

(Additional reporting by Amanda Cooper and Christopher Johnson in LONDON, Aaron Sheldrick in TOKYO and Henning Gloystein in SINGAPORE; Editing by Louise Heavens and Richard Chang)