Private Hasan Amat was 23 years old when he died during the Battle of Hill 70, which took place one hundred years ago this week.

Amat, originally from Singapore, is believed to be one of 22 Muslim soldiers to serve for Canada in World War I.

“He’s the only one who was killed in action,” said Dr. Georgiana Stanciu, Executive Director of The Royal Canadian Regiment Museum in London.

Amat’s story has a few twist and turns – including a stop in London, Ont. – where he’ll be honoured on Sunday along with others who served with him at the Batte of Hill 70, which lasted for 10 days in August, 2017.

“He had quite a bit of an adventure,” said Stanciu, while sifting through his medical and service history.

Amat was at first rejected by the Royal Canadian Regiment when they said he was unfit to serve – but did enlist in New Brunswick.

When asked if he had any military service he replied:

Amat deployed to France with the 1st Canadina Infantry Battalion out of London, where he was hospitalised with influenza three times while suffering from bronchitis and gum disease.

“What we know is that his unit was engaged in various other battles – including Vimy,” said Stanciu.

Amat has no known grave but his name is listed on the Vimy memorial. 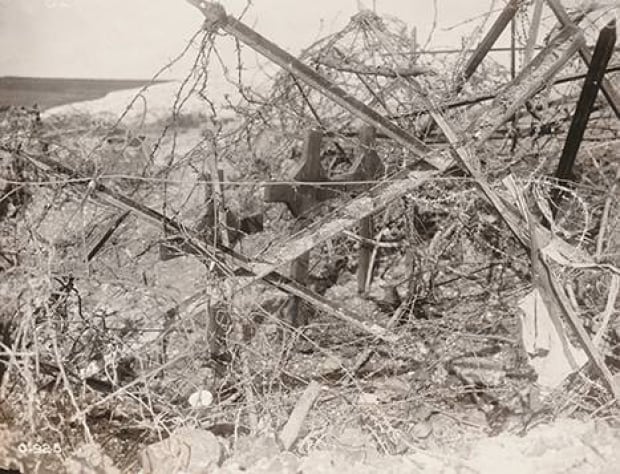 Thousands of people died in the Battle of Hill 70 in France during the First World War. (Royal Canadian Regiment Museum)

The Battle of Hill 70 was a fought shortly after Vimy by the Canadian Corps, led for the first time by a Canadian officer, Lieutenant General Arthur Currie.

“They were fighting back and forth for maybe 5 kilometres terriorty and were losing 10-15 thousand people altogether in 4 or 5 days,” said Stanciu.

It’s named the Battle of Hill 70 because the fight was waged over a high piece of land near the town of Lens, then occupied by German forces.

The ceremony at the Wolseley Barracks Centopath starts Sunday at 10:45 a.m.