The US Navy has ordered a worldwide “operational pause” after a collision off Singapore that has left ten sailors missing.

A US warship collided with an oil tanker east of Singapore, the US Navy said.

It is the second incident involving US Navy destroyers in Asian waters in little more than two months.

The guided-missile destroyer USS John S McCain collided with the merchant vessel Alnic MC before dawn while heading to Singapore for a routine port call, the Navy said in a statement.

“There are currently ten sailors missing and five injured.” 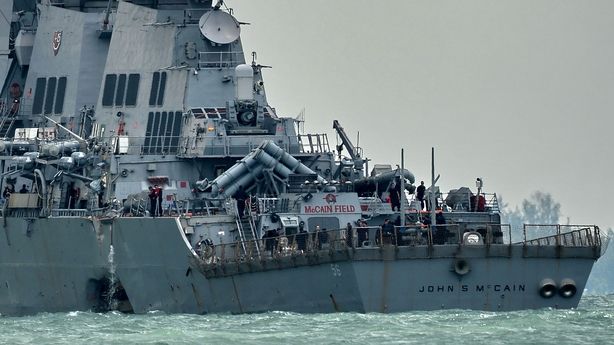 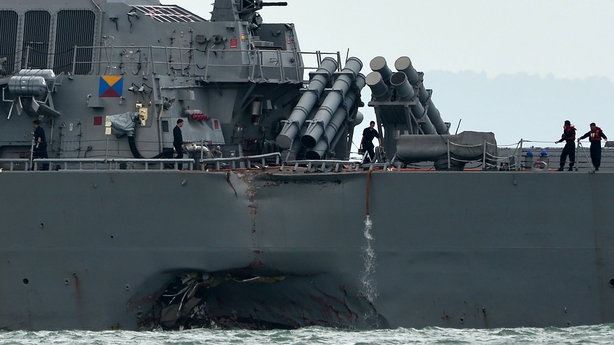 Four of the injured were evacuated by helicopter to a hospital in Singapore with non-life threatening injuries, while the fifth needed no further treatment, it said.

The USS John S McCain’s sister ship, the USS Fitzgerald, almost sank off the coast of Japan after it was struck by a Philippine container ship on 17 June.

Collisions between warships and other large vessels are extremely rare, with naval historians going back more than 50 years to find a similar previous incident.

A search-and-rescue mission was under way for the sailors missing from the USS John S McCain involving Singaporean ships, helicopters and tug boats, as well as US Navy aircraft.

The warship arrived at Changi Naval Base in Singapore after suffering damage to its hull that caused flooding in compartments, the US Navy said.

#USSJohnSMcCain Update: The ship has arrived pier side at Changi Naval Base in Singapore. pic.twitter.com/tjB783d8Yh

“Significant damage to the hull resulted in flooding to nearby compartments, including crew berthing, machinery, and communications rooms. Damage control efforts by the crew halted further flooding,” the US 7th Fleet said in a statement.

The Alnic MC is a Liberian-flagged, 183 metre-long oil or chemical tanker of 50,760 deadweight tonnes, according to shipping data in Thomson Reuters Eikon.

An Alnic crew member told Reuters by telephone there was no oil spill from the tanker, which was carrying almost 12,000 tonnes of fuel oil from Taiwan to discharge in Singapore.