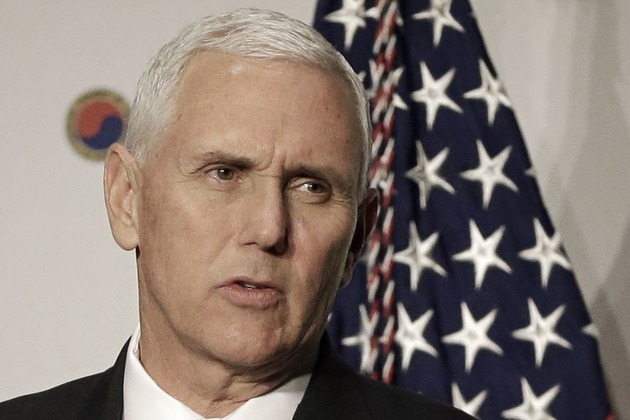 U.S. Vice President Mike Pence has warned North Korea not to test the resolve of the United States, promising it would make an ‘overwhelming and effective’ response to any attack.

Speaking aboard the aircraft carrier USS Ronald Reagan on April 19, Pence said North Korea was “the most dangerous and urgent threat to peace and security in the Asia-Pacific’ region.

He said that President Donald Trump’s administration will continue to ‘work diligently’ with other countries to apply economic and diplomatic pressure on Pyongyang, and that the United States ‘will always seek peace.’

But Pence also warned that “those who would challenge our resolve or our readiness should know: We will defeat any attack and meet any use of conventional or nuclear weapons with an overwhelming and effective American response.”

‘The shield stands guard and the sword stands ready,” he said.

Pence’s comments during his tour of the region come days after North Korean tested on April 16 a missile that blew up almost immediately after launch, according to the Pentagon.

‘The leader of North Korea again recklessly tried to provoke something by launching a missile,’ U.S. Defense Secretary Jim Mattis said on April 18, adding that the United States was ‘working closely’ with China to engage Pyongyang.

China expressed concern on April 19 over comments made by North Korean officials warning of further missile tests and the possibility of nuclear war. Foreign Ministry spokesman Lu Kang said Beijing was resolutely opposed to any words or actions that could contribute to raising tensions.

North Korea has accelerated its nuclear and missile tests in recent years, despite international condemnation and UN sanctions.

Amid rising tensions over the country’s nuclear ambitions, Trump said early last week that an ‘armada’ was being sent as a warning to North Korea.

The U.S. military said on April 10 that the aircraft carrier strike group Trump was referring to had been ordered to “sail north and report on station in the Western Pacific’ after departing Singapore.

However, it has emerged that the USS Carl Vinson and other warships did not sail toward the Korean Peninsula, but went in the opposite direction.

On April 15, the U.S. Navy published a photo showing the aircraft carrier USS Carl Vinson transiting the Sunda Strait between the Indonesian islands of Java and Sumatra.

And the website www.gonavy.jp/CVLocation.html reported that from April 16-18 the Carl Vinson was in the Indian Ocean.

The U.S. military’s Pacific Command announced on April 18 that the strike group had completed a shorter-than-initially scheduled training with Australia off its northwest coast.

It added that the group was now ‘proceeding to the Western Pacific as ordered.’

Based on reporting by AFP