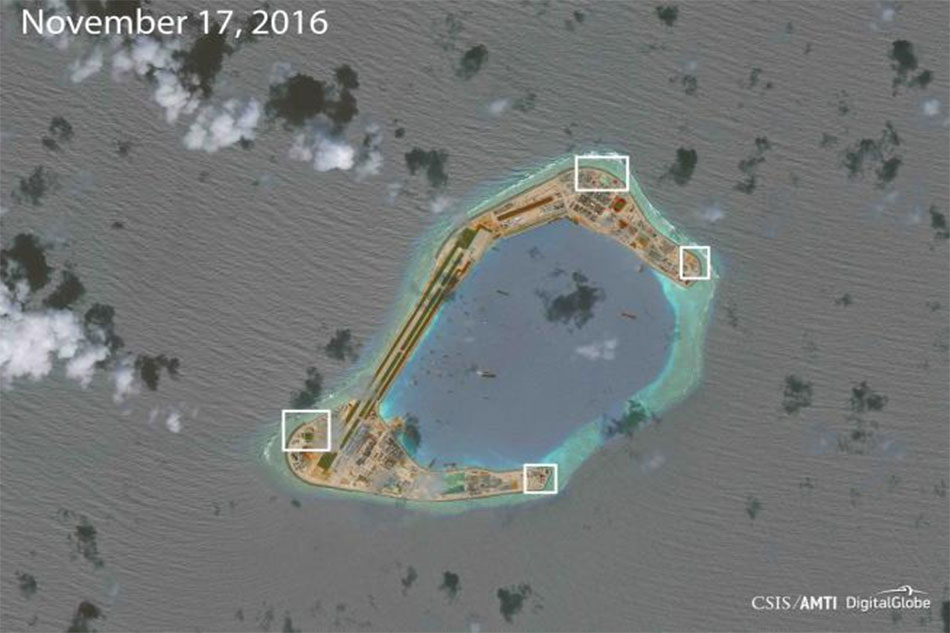 A satellite image shows what CSIS Asia Maritime Transparency Initiative says appears to be anti-aircraft guns and what are likely to be close-in weapons systems (CIWS) on the artificial island Subi Reef in the South China Sea in this image released on December 13, 2016. Courtesy CSIS Asia Maritime Transparency Initiative/DigitalGlobe/Handout via Reuters

MANILA – The Philippines would not protest China’s moves to militarize its man-made islands in the South China Sea, Foreign Minister Perfecto Yasay said on Friday, amid Manila’s efforts to improve ties with Beijing.

China has deployed anti-aircraft and anti-missile systems on the artificial islets it has built in the disputed Spratly Islands, the Asia Maritime Transparency Initiative (AMTI) at the Center for Strategic and International Studies said in findings reported by Reuters this week.

Speaking to reporters in Singapore during an official visit by President Rodrigo Duterte, Yasay said the government will not issue any diplomatic protest to China via a “note verbale”.

“We will make sure that there will be no further actions that will heighten the tensions between the two countries, particularly in the Scarborough Shoal,” Yasay said, referring to another group of disputed islets.

“Let them take whatever action is necessary in the pursuit of their national interest… and we will leave it at that, for the Philippines, we have our bilateral engagements with China,” he said, adding that other countries could deal with any issues.

Since his election six months ago, President Duterte has sought to strengthen previously strained relations with Beijing, while cooling ties with long-time ally, the United States.

Yasay’s remarks contrast with those of Defense Secretary Delfin Lorenzana, who on Thursday described China’s latest actions in the Spratly Islands as a “big concern” for the international community .

Every year, about $5 trillion worth of maritime trade passes through the sea, which is believed to hold deposits of oil and gas.

Aside from China and the Philippines other countries with maritime claims in the sea include Brunei, Malaysia, Taiwan and Vietnam.

“We cannot stop China… there is nothing that we can do about that now,” Yasay said, adding improving relations with Beijing had paid off because Filipino fishermen can now fish around Scarborough Shoal.

In Manila, Coast Guard officials from the Philippines and China concluded two-day of talks to draw up an action plan to cooperate in fishing, environmental protection and humanitarian assistance in the South China Sea.