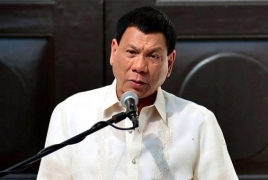 PanARMENIAN.Net – Philippine President Rodrigo Duterte told the United States on Saturday, December 17 to prepare for repeal of an agreement on deployment of troops and equipment for exercises, declaring “bye-bye America”, and we don’t need your money, Reuters reports.

Returning his focus to the present U.S. administration which has criticised him over reports of extra-judicial killings in his campaign against drugs, he said:

The Visiting Forces Agreement (VFA), signed in 1998, accorded legal status to thousands of U.S. troops who were rotated in the country for military exercises and humanitarian assistance operations.