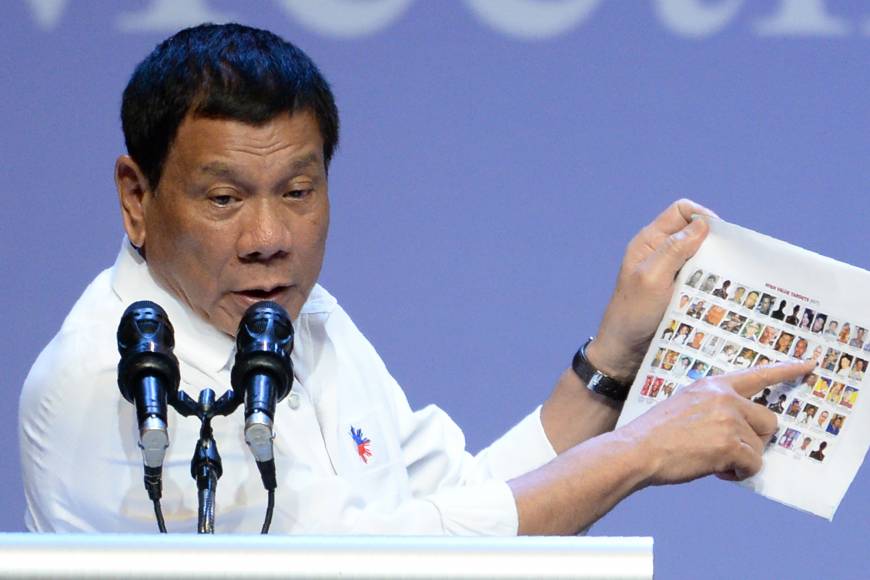 MANILA – Philippine President Rodrigo Duterte on Saturday threatened to terminate a pact that allows U.S. troops to visit, saying, “Bye-bye, America” as he reacted with rage to what he thought was a U.S. decision to scrap a major aid package over human rights concerns.

A U.S. government aid agency, the Millennium Challenge Corp., said Thursday that its board had deferred a vote on a renewal of the development assistance package for the Philippines “subject to a further review of concerns around rule of law and civil liberties.”

The U.S. agency has not yet voted to either scrap or approve the aid package, but Duterte unleashed a barrage of expletives-laden tirade upon his arrival in his southern hometown in Davao after back-to-back visits to Cambodia and Singapore.

“I understand that we have been stricken out of the Millennium Challenge. Well, good, I welcome it,” Duterte said with apparent sarcasm.

“We can survive without American money,” he said. “But you know, America, you might also be put to notice. Prepare to leave the Philippines, prepare for the eventual repeal or the abrogation of the Visiting Forces Agreement,” he said, referring to a 1998 accord that governs American forces visiting the Philippines for joint combat exercises.

The 71-year-old Duterte, who describes himself as a left-wing politician, has made similar threats before and after taking office in June, but he and his officials have walked back on many of his public statements, causing confusion.

While calling Americans “sons of bitches” and “hypocrites,” Duterte praised China as having “the kindest soul of all” for offering what he said was a huge financial assistance. “So, what do I need America for?” he asked. He also said Russia can be a very important ally, adding, “They do not insult people, they do not interfere.”

The Philippines had been slated for another aid package after its previous five-year, $434 million poverty reduction program was successfully completed in May under Duterte’s predecessor, Benigno Aquino III.

The agency’s spokeswoman Laura Allen said Thursday it will continue to monitor events in the Philippines before the next board review in March 2017.

The U.S. decision is among the first signs of how concerns about the rule of law and human rights under Duterte could entail economic costs.

The U.S. government, along with European Union and U.N. officials, has raised concerns about Duterte’s crackdown on illegal drugs, which has left more than 2,000 suspected drug users and dealers dead in purported gunbattles with police. More than 3,000 other deaths are being investigated to determine if they were linked to illegal drugs.

Duterte, who has had a difficult relationship with President Barack Obama, said he would change his mindset if President-elect Donald Trump appeals to him. “I have talked to Trump; he was very nice, very courteous. I could not sense any hostile drift or even the manner he was saying it, so, in deference, I’ll just wait.

“I will let Obama fade away, and if he disappears, then I will begin to reassess,” Duterte said, adding that he and Trump had acknowledged each others’ similarly brash manners.

“We talk in the same language,” Duterte said. He recalled that when he told Trump in a recent phone call that “I like your mouth, it’s like mine,” he said Trump responded by saying, “Yes, Mr. president, we’re similar.”

“And you know, people with the same feather flock together,” Duterte said.

Manila has veered toward Beijing amid the dispute with Washington despite territorial disputes and the U.S. alliance.

A day earlier, Yasay said his country won’t take any steps against China in response to reports it apparently has installed anti-aircraft and anti-missile weapons on its new artificial islands in the disputed South China Sea.

Yasay said that while the United States and other countries might take actions to ensure freedom of navigation and overflight in the disputed waters, the Philippines will not take any steps that would reignite tensions.

When asked if the Philippine foreign affairs department plans to issue any statement or ask China to clarify, Yasay said, “We want to make sure that there will be no further actions that will heighten the tensions between the two countries, particularly in the Scarborough Shoal.” He was referring to a disputed fishing area off the Philippines’ northwestern coast where tensions recently eased when Chinese coast guard ships allowed Filipinos to fish after blocking them from the area for years.

The Center for Strategic and International Studies, a U.S. security think tank, said in a report late Wednesday that China appears to have installed anti-aircraft guns and close-in weapons systems designed to guard against missile attack on its seven newly created islands in the disputed sea.

Yasay said in a news conference in Singapore, where he and other officials are accompanying Duterte on a visit, that “there is nothing that we can do about that now, whether or not it is being done for purposes of further militarizing these facilities that they have put up.”

“We cannot stop China at this point in time and say, ‘Do not put that up.’ We will continue to pursue peaceful means at which all of these can be prevented,” he said.

His remarks differed from Defense Secretary Delfin Lorenzana, who expressed concerns over the CSIS report and said the government was attempting to verify it.

“If true, it is a big concern for us and the international community who uses the South China Sea lanes for trade,” Lorenzana said Thursday. “It would mean that the Chinese are militarizing the area, which is not good.”