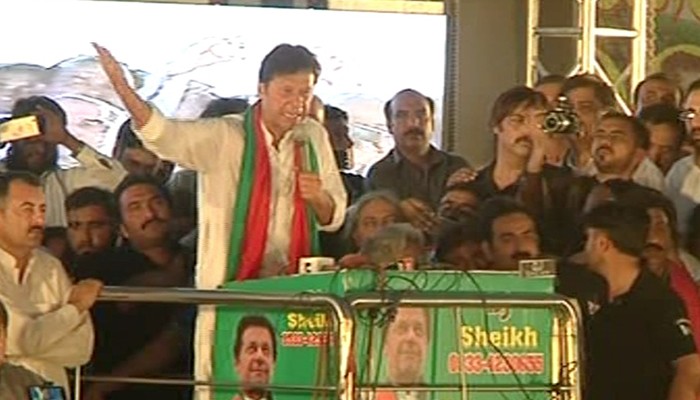 Addressing party workers in Khushab ahead of the NA-120 by-poll, Imran claimed that the “lies of the Sharif clan have come to the forefront”.

The PTI chief questioned the former Prime Minister Nawaz Sharif’s daughter Maryam Nawaz’s motive to lie to the nation, after an audio recording of the latter was played in which she denied owning any properties in Pakistan and abroad.

“The Sharif family lies because it has looted your [the nation’s] money,” Imran insisted.

Lashing out at the PML-N, Imran claimed the party tried to bribe the top brass of the country for their ‘corrupt motives.’

“Voters in Lahore must decide if they support the judiciary or not,” he said, referencing to the Supreme Court’s decision to disqualify Nawaz Sharif from holding public office on the basis of Constitution’s article’s 62 and 63.

“Pakistanis pay the most for electricity in South Asia because of the billions that corrupt leaders have borrowed from the International Monetary Fund,” Imran said, insisting that Nawaz Sharif and his family have profited from corruption while the nation suffers from poverty.

Citing the example of African countries, he said despite having diamond mines, the countries couldn’t progress due to deep-rooted corruption, adding that Pakistan needs to rid itself of corrupt leaders in order to make significant strides in development.

He compared the economic development of Singapore with Pakistan, stating that one honest prime minister changed the country’s standing in the world.

Speaking about the NA-120 by-polls on Sunday, he said, “If rigging is stopped this Sunday, it will be a victory for justice.”

Imran claimed that Maryam Nawaz, daughter of former prime minister Nawaz Sharif, is behaving like a deputy prime minister in the run-up to the by-polls in the NA-120 constituency.

Addressing the crowd at Daata Darbar, he said, “Ask Maryam Sharif a question when she comes to ask for vote, ask her, where did the money come from?”

He also blasted the Election Commission of Pakistan (ECP) for issuing his arrest warrants, saying that the ECP has never heard a contempt of court case before his. “The ECP is working on PML-N’s behest.”

Results of NA-120 by-election will introduce the system of justice, the PTI chief reiterated.