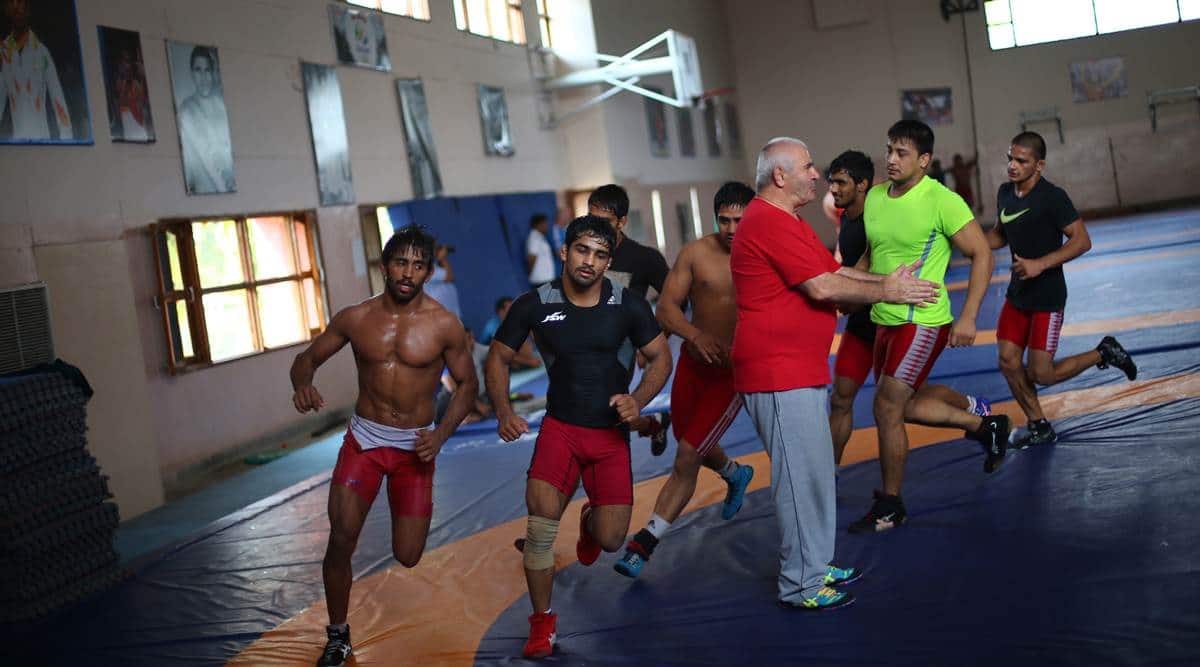 Vladimer Mestvirishvili was India’s foreign coach for more than a decade. However, he was largely restricted to national camps and did not travel with the team for major tournaments. (Express File Photo by Oinam Anand)

Last month, the Wrestling Federation of India (WFI) believed its 16-month hunt for a foreign freestyle coach had finally ended when they seemed to have found the right candidate. They were in advanced talks with Sergei Beloglazov, a Russian legend who, after retirement, coached his national team before moving on to coach USA, Japan and Singapore.

But, it seems, the WFI’s ‘reputation’ precedes it. What looked a certain appointment became iffy after Beloglazov, 61, raised apprehensions over the federation’s history of not sending foreign coaches for international tournaments before eventually deciding not to accept the offer for that very reason.

For more than a decade, the Indian team has been accompanied by national coaches while the foreign tacticians stayed put at the SAI training centre in Sonepat. Beloglazov wasn’t ready to be restricted only to camps.

“We were in talks with him and things were headed in the right direction. But while doing his due diligence, he got to know that foreign coaches have not accompanied the national team during tournaments,” a federation official said. “He raised that concern with us and even though we assured him that it won’t be the case with him, he didn’t look convinced. Eventually, the deal fell through.”

After the Rio Olympics, the WFI parted ways with foreign coach Vladimer Mestvirishvili. The Georgian was with the national team for 13 years and is credited for India’s dramatic rise during this period, but the federation insisted Mestvirishvili had ‘outlived his usefulness’ and had to be replaced. Apart from Mestvirishvili, the federation decided against renewing the contracts of women’s freestyle coach Roin Doborjginidze and Greco-Roman coach Emzar Makharadze.

One of the key criteria they had set for selecting the new coach was his own performance during his competitive days, with the federation insisting the candidate should have won either an Olympic or World Championship medal.

Beloglazov was the most high-profile candidate they came across. The Russian was the most dominant wrestler in the 1980s, winning six World Championship gold medals between 1981 and 1987. He also won the Olympic gold in 1980 and 1988. After retiring, he led the national programmes in Russia, Japan and the USA, leaving his mark in all three countries.

The WFI official said Beloglazov’s snub was a surprise and now fears this ‘reputation’ might hinder their search. “He is a world-renowned wrestler and coach. The wrestling community is small and the top coaches know each other. He must have asked Vladimer about the working conditions in India, who would have given his opinion,” he said.

Mestvirishvili never accompanied Indian wrestlers at major events. He spent more than a decade at the SAI while lesser-known Indian coaches travelled for World Championships and Olympics. Consequently, when the wrestlers won a medal, the Indian coaches were given awards and bonuses while the Georgian wasn’t given his due, although Sushil Kumar and Yogeshwar Dutt credit him for their Olympic medals.

With Beloglazov turning down the offer, the WFI has been forced to start the search all over again. It’s the same on the women’s side, where they haven’t yet been able to shortlist candidates. The federation is keen on a Japanese coach for the women’s team but have not been able to identify a potential candidate.

The absence of a foreign coach has severely impacted the performance of Indian wrestlers, with the team returning without any medal from the World Championships last year while their performance at the Asian Championship, too, was mediocre.

With the CWG just three months away, it is unlikely that the new coaching staff will be identified and appointed although the federation is hopeful of finding replacements before the Asian Games in August. “We have sought help from our contacts in Japan for the women’s team and are in touch with some coaches from Iran and Russia for the men’s team.,” the official said.