Imagine for a moment that iron ore was still priced the way it was for decades, in closed-door meetings between miners and steel makers, and then try to visualise what the current level would be.

Whatever number you may have come up with, it’s unlikely to be anything close to the $76.57 a tonne iron ore futures traded in Singapore fetched at the close on Monday.

It’s likely that it would be a far lower figure, given the current seaborne market dynamics of ample, and growing supply, and reasonable, but no longer, surging demand growth. 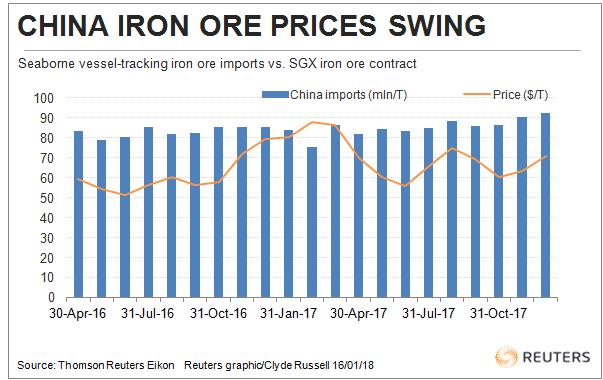 But the main difference between the long-term contract talks that prevailed up until around 2010 and the current system of short-term deals and spot pricing is the volatility of seaborne iron ore prices.

The SGX futures, which mirror the spot price for cargoes delivered to China, is up 7.4 percent in the first half of January, part of a longer rally that has seen it surge some 31 percent since the start of November.

Normally a gain of this magnitude would imply that a commodity is either supply constrained, or experiencing a surge in demand, or a combination of both.

But iron ore is definitely not in short supply given the addition of new capacity in top producers Australia and Brazil. Demand growth in top consumer China has been steady but unspectacular, with imports rising 5 percent in 2017 from a year earlier.

It appears that the market pricing dynamic has become somewhat divorced from underlying fundamentals, and the defining characteristic of the past year has been volatility.

This was followed by another sharp drop to $58.53 on Nov. 1, before the current rally, which has taken the price back to levels close to where it was a year ago.

A range of around $36 a tonne between the highs and lows of 2017 appears at odds with the largely steady growth in imports by China, which buys about two-thirds of global seaborne supplies.

While there was a spike and plunge in China’s imports in September and October, this was most likely the result of cargoes being counted as having arrived in September, ahead of a week-long holiday period in October.

In other words, the physical iron ore market is nowhere near as volatile as the financial market has become.

Some of the blame for this is laid at the door of domestic investors in China, who are prepared to trade large volumes of iron ore futures on the Dalian Commodity Exchange on a day-to-day basis, responding rapidly to swings in sentiment.

In general it appears that the market has become much more responsive to news events, with the current rally largely resting on a rally in Chinese steel prices late last year and expectations that the world’s top producer will enjoy both robust production and demand in 2018.

The iron ore market has largely shrugged off, so far at least, the steadily rising inventories at Chinese ports, which reached 152.3 million tonnes as of Jan. 12, the highest since at least 2004, according to data compiled by consultancy SteelHome.

Inventories SH-TOT-INV have climbed even as iron ore prices rose in recent months, with the current level some 21 million tonnes, or 16 percent, above that which prevailed three months ago.

It’s not immediately clear how all this iron ore will be used up, with China’s steel output expected to increase only modestly in 2018, by about 0.7 percent to 838 million tonnes from 2017’s 832 million, according to the China Metallurgical Industry Planning and Research Institute.

As things stand, there is no reason for iron ore to extend its rally, and several good factors as to why it should be in retreat.

But in the new era of increased financial market trading, price volatility driven by sentiment and momentum may hold sway more than fundamentals.

For the iron ore miners, this is most likely a better situation than the old system of fixed-price contracts, as it’s probably more profitable to deal with volatility and enjoy higher overall prices.
Source: Reuters (Editing by Richard Pullin)