Tracy You For Mailonline

For most dogs, the average day involves catching a stick in the park and chomping on some meaty dog food. But for Wang Coco, life is a little different.

For Coco is the beloved Alaskan Malamute belonging to the son of China’s richest man, worth £18.4bn.

Her average day involves being bought designer handbags, private jets, being given not one but two Apple iWatches, and riding in her owner’s Lamborghini. 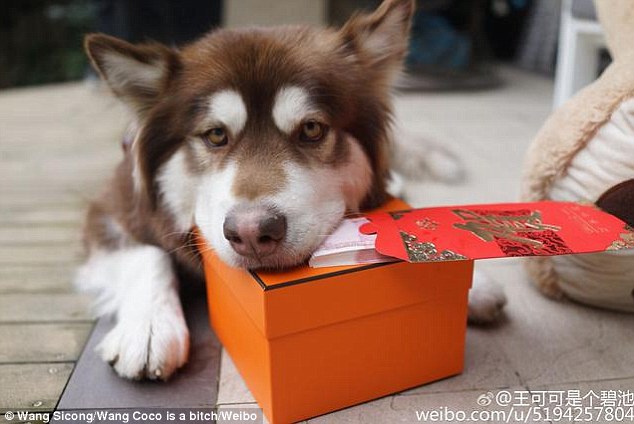 Spoiled: Wang Coco was given wads of cash in a red envelope by her owner on the Valentine’s Day this year 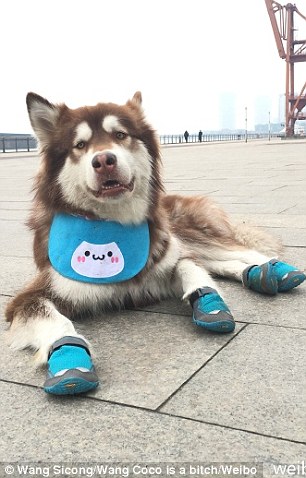 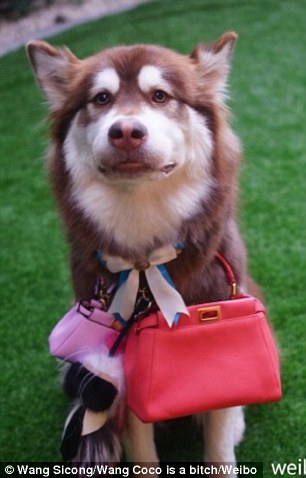 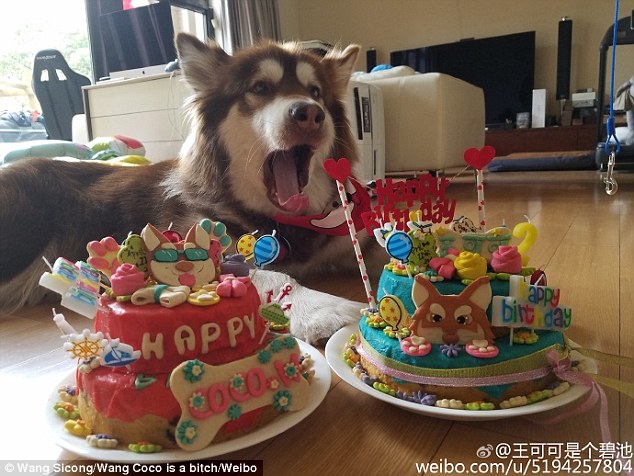 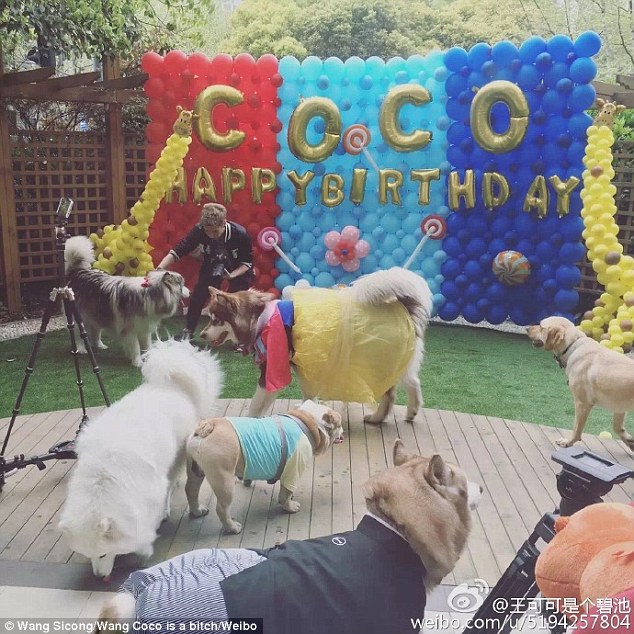 Having fun: Coco celebrated her birthday on April 11 frolicking with her friends at a party organised by Sicong

The world’s most pampered pooch celebrated her second birthday on Monday with an extravagant birthday party and two cakes.

Coco’s eccentric owner Wang Sicong was educated at Winchester College and is already worth £430 million at the age of 28.

To mark her birthday, the multi-millionaire spelt her name in balloons and tied them to his super car.

On social media Coco was pictured tucking into her two cakes at her own birthday celebration.

As if all is not enough, Sicong opened an online shop to mark her birthday to launch a pet’s lifestyle brand in honour of his Coco.

The new online shop, called Coco Wang, sells a line of doggie-inspired toys and accessories, from tote bags, flasks to mobile phone cases. All of them carry cartoon illustrations of the fluffy pet.

As head of the new range Coco has become a celebrity in her own right in China as her owner calls her: ‘the dog princess of the people.’

The Alaskan Malamute, even has her own social media profile, which is followed by 1.6 million fans on China’s equivalent to Twitter, Weibo.

Through the account, Sicong shows off the ostentatious lifestyle he has created for his dog with luxury products most animals can only dream of.

The two-year-old’s assets include the two £800 Apple Watches countless costumes, high fashion accessories including a Fendi handbag and a Hermes leather leash.

On Valentine’s Day, Sicong posted pictures of ‘his love’ posing with a wads of cash, which he claimed is her present. 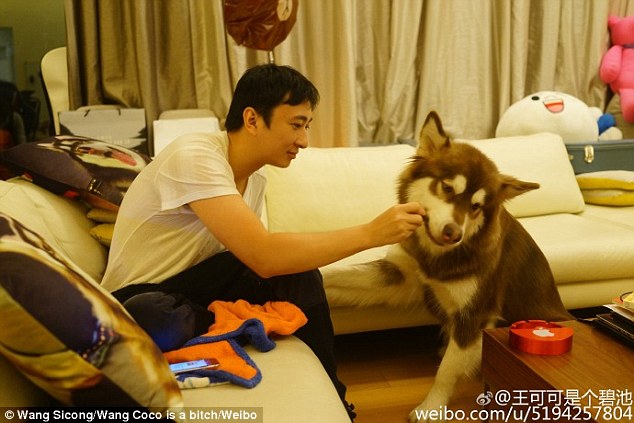 Fatherly love: Coco is pictured playing with her doting owner whose mega rich father is worth £18.4 billion

Birthday bash: Her own Wang Sicong, who is the only son to China’s richest man, spared no effort in celebrating the big day. He spelt the pooch’s name in balloons attached to a luxury car 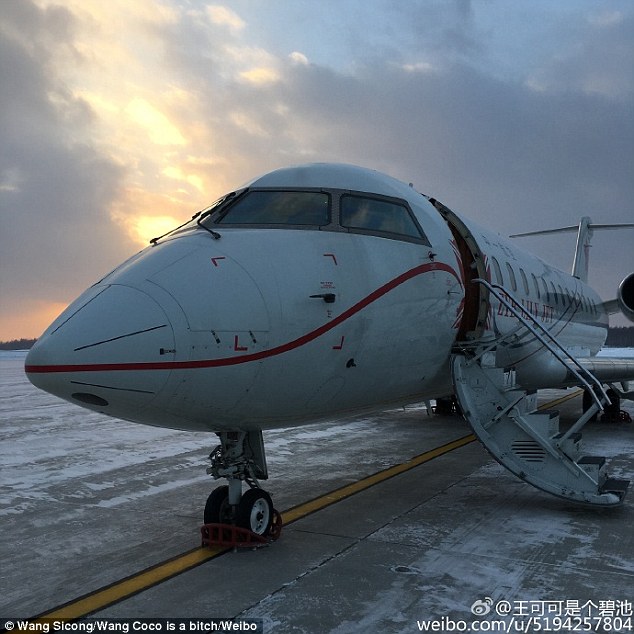 High flying: Last November, the pet took a ride on a private jet during a winter holiday trip with her owner 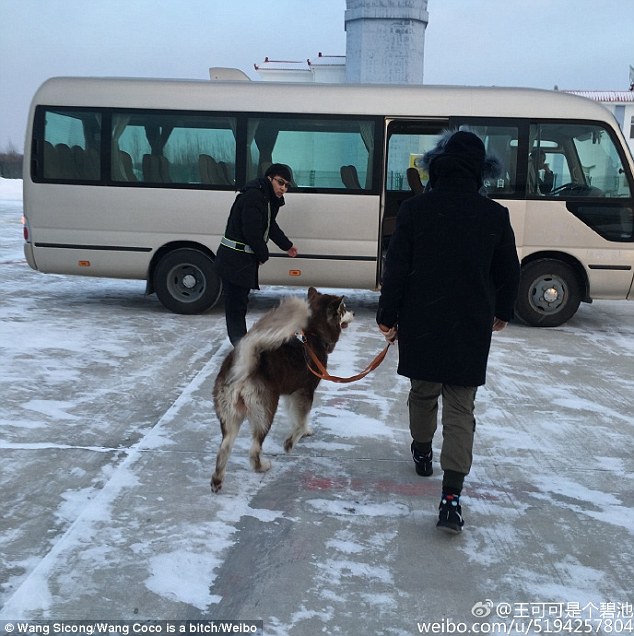 VIP service: The lucky canine travelled in real style as she was then transferred to her private mini bus

Five days later, Coco was photographed wearing new expensive footwear – with the message: ‘Today [I] go out wearing my news shoes. Are they pretty? Are they fashionable? Don’t ask what brand they are, you won’t be able to afford them.’

And when Coco goes on holiday, she travels in first-class style. In November for a winter break, she rode on a private jet and was chauffeur driven to the luxury accommodation.

Coco is truly is this man’s best friend, but what of her flamboyant owner?

The only son of mega-rich property tycoon Wang Jianlin, 61, Sicong is the golden boy with the gentle manner, cut-glass English accent, who is the sole heir to his father’s fortune.

China’s most eligible bachelor, Sicong is the darling of China’s tabloids due to his enviable lifestyle and rarely pictured with a beautiful model on his arm.

Born in 1988 and raised in Dalian, a city of six million on the eastern coast, his visionary father a former soldier started a real-estate company with an £80,000 loan in the same year his son was born.

Like most privileged children of China’s mega-wealthy, Sicong was educated abroad – first at a primary school in Singapore and then to £30,000 a year Winchester College – one of England’s top public schools – and on to University College London where he studied philosophy.

Back in China, in 2009 he was handed a gilded position in the Dalian Wanda conglomerate by his father – and £53 million to start his own business.

‘I told him I would allow him to fail twice. If he fails for the third time, he would have to come back and work in my company earnestly,’ his father told China Central Television (CCTV).

He set up Pusi Capital, a private equity firm based in capital city Beijing, to invest in projects and companies he likes. 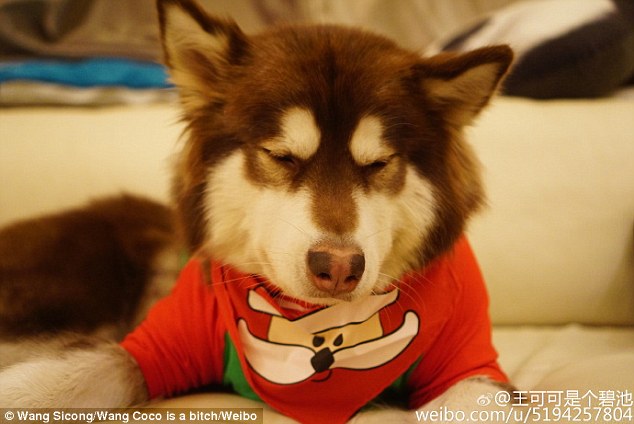 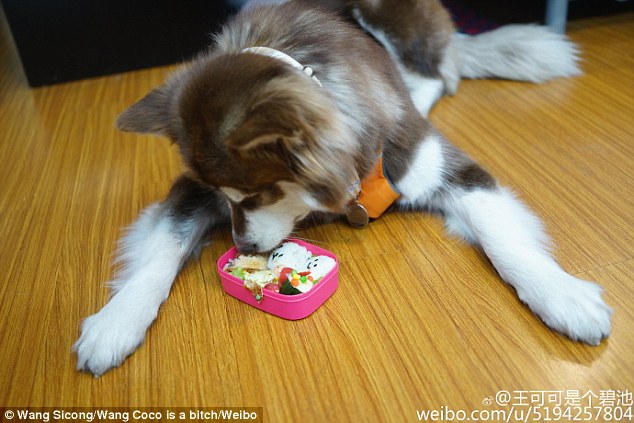 It’s lunch time:  The indulged dog is fed only the finest food by her owner, from Uruguayan beef shanks to sushi 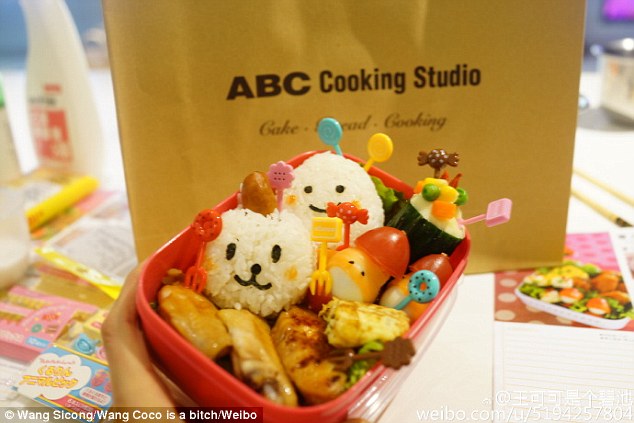 Unusual choice: Coco’s unique meal was posted onto her social media account. However, it hasn’t been revealed if the rice meal was specially made for dogs

Sicong is a successful businessman and one of the richest entrepreneurs under the age 30 in China.

The aspiring man has managed to increase his fortune eight times in the past six years through Pusi Capital, and is set to create a business empire of his own.

His private equity firm has invested in 22 companies in the past seven years, from online gaming firms to film-making studios to Korean restaurants.

They help Sicong grow his portfolio of fortune from £53 million to £430 million, as revealed by Hurun Rich List 2015.

This has also made Sicong one of the most successful entrepreneurs under the age of 30 in China.

Digital gaming is Sicong’s favourite field of moneymaking as well as his passionate hobby. He has founded Invictus Gaming Club with an aim to build the world’s best online gaming team.

In 2015, he has also launched Panda TV, a multimedia platform where users can spend hours watching strangers playing video games. 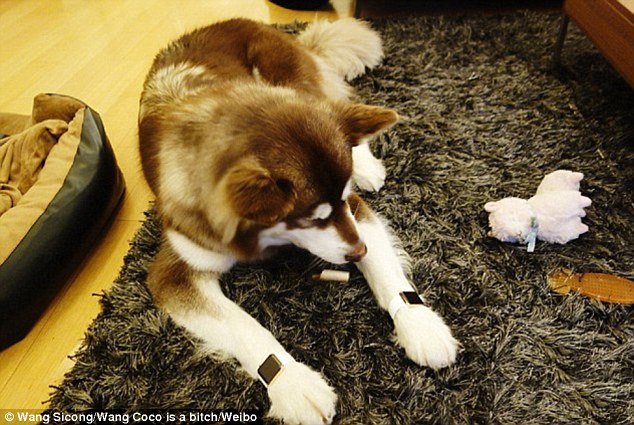 Lucky dog: Son of China’s richest man dotes on his dog so much that he’s bought two Apple Watches for her 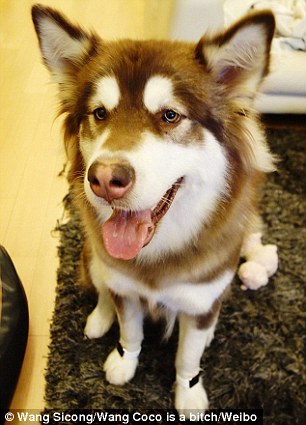 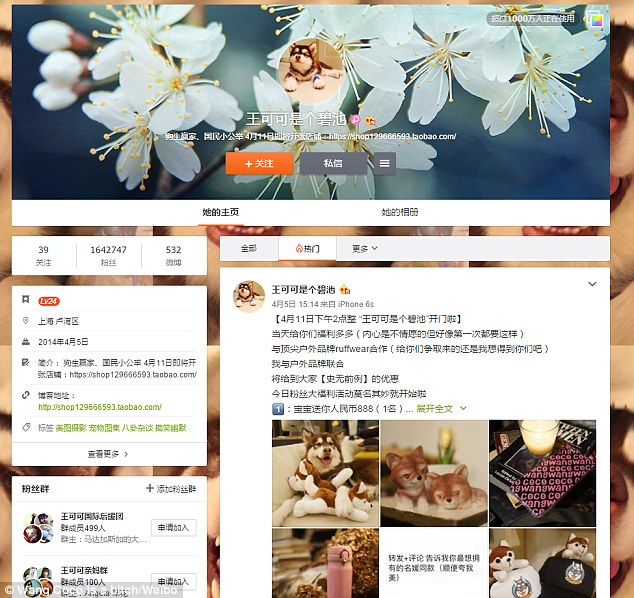 Online celebrity: Wang Coco’s social media account, set up by her owner, is followed by over 1.6 million people

Besides Wang Coco, the party-loving playboy is also renowned in China for the roster of models and actresses on his arm, as well as his way of spoiling them.

So much so that he has been billed the ‘people’s husband’ in China for the number of women that fancy him.

Sicong has high-profile friendships with young, doe-eyed, and buxom models and actresses who are eager to make their mark in the world of fame and fashion.

On how to choose his partner, the affluent bachelor once told reporters from NetEast that his only criterion is that she must have ‘big breasts.’

Unsurprisingly, Sicong is a super generous boyfriend. He had allegedly bought one of his former girlfriends, 27-year-old anchor Chen Wenjie , a Maserati and dozens of Chanel bags with the total worth of about £540,000.

Among others, he has also dated Shen Yating, an upcoming fashion model, and Wei Wei’er, China’s ‘queen of legs’ whose incredible pins measure 47 inches long. 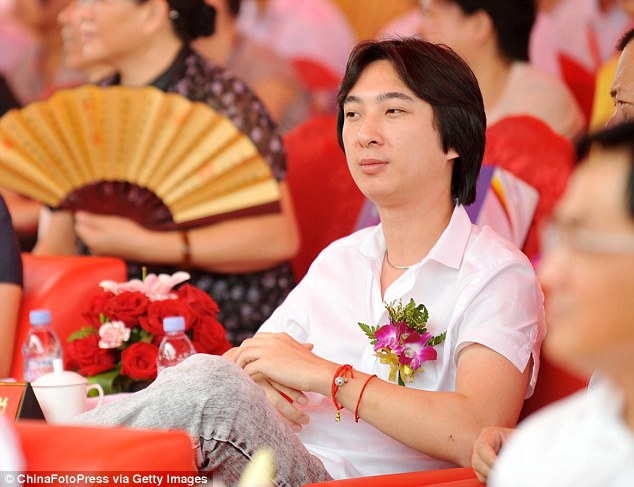 Life of luxury: Wang Sicong (pictured) is the only child of Wang Jianlin, a property tycoon worth £18.4 billion 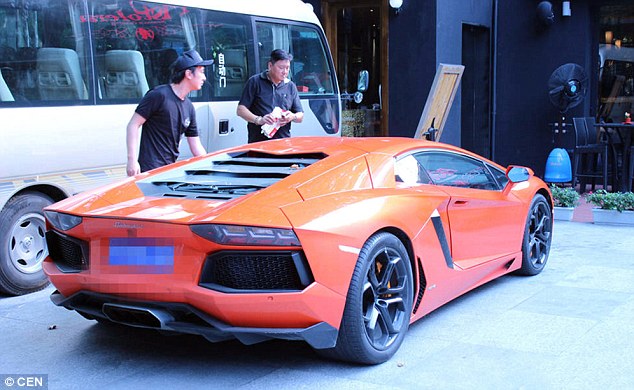 Striking supercar: The 28-year-old frequents China’s tabloids thanks to his lavish lifestyle. He was pictured with his Lamborghini in Shanghai last September 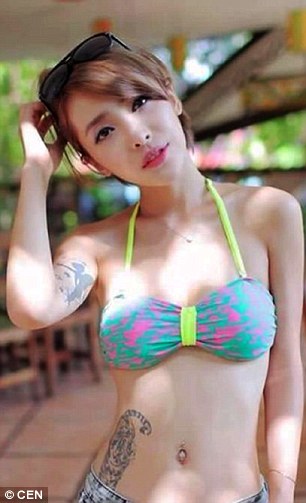 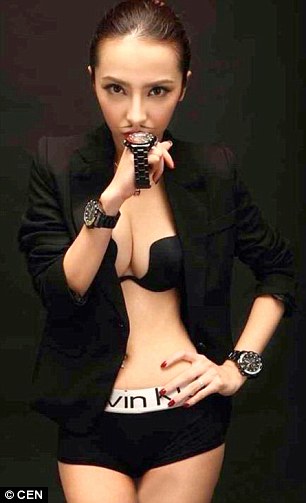 Sexy companion: The affluent bachelor has whirlwind romances with a long list of women. His former girlfriend, Shen Yating (pictured), is an up and coming model 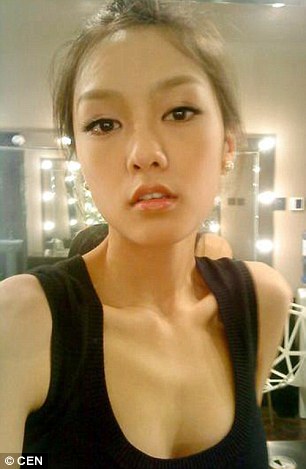 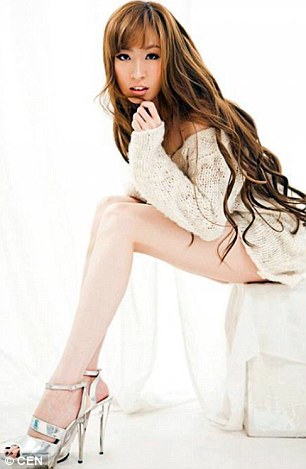 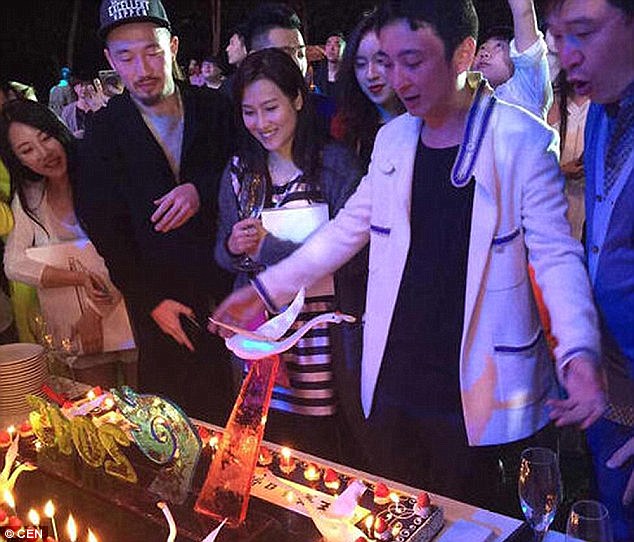 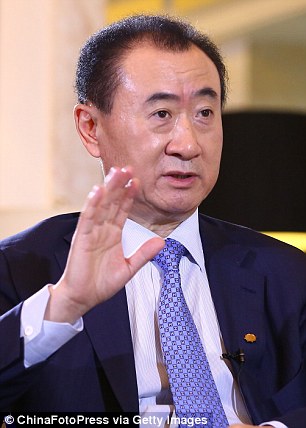 Father and son: Magnate Wang Jianlin (left) has sent Sicong (right) to Singapore and the UK for elite education

Last but not least, Sicong is not shy of splashing cash on himself.

In the past winter, he had a sumptuous ski helmet customised for his winter holidays, which was made with exotic animal skin and inlaid with gold and silver.

Most recently, the playboy reportedly spent £270,000 at a Karaoke parlour in one night, the price of a two-bedroom flat in Shanghai.

In an interview with Marie Claire China, Sicong said: ‘What is success? To me, it’s to do whatever I wish.’

In comparison, Sicong’s billionaire father commented on his controversy to CCTV: ‘He is a smart child. [He] went abroad when he was only grade one.

‘[His] whole logic is westernised and he is independent. He says what he thinks.’