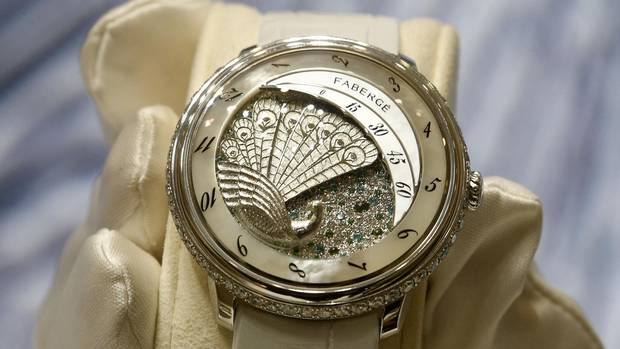 Diamonds from Tiffany. A watch from Cartier. Antique pearls that have been in the family forever.

The treasure chests of high-net-worth people are often filled with expensive jewellery and watches. Households in the top income bracket spend four times more than the average on fine jewellery, according to a study of consumers in the United States by the research firm Edahn Golan Diamond Research and Data.

“We’ve got customers with millions of dollars in jewellery,” says Chris Sevdalis, senior vice– president of Aviva Canada, a Toronto-based insurance company and part of Aviva PLC in Britain. “Some are serious collectors with a large aggregation of jewellery valued at upwards of $10-million.”

Jewellery is more easily lost or stolen than dollars in a bank account, or stocks and bonds in an investment portfolio. Anyone who’s ever had a bracelet slip off their wrist or an engagement ring fall into a sink will attest to this.

Even the heavily guarded Kim Kardashian isn’t immune to losing her baubles; last October in Paris, after she sent her bodyguard to accompany one of her sisters to a nightclub, the reality TV star was tied up in her hotel room and robbed of 13 pieces of jewellery reportedly valued at $5.6-million (U.S.).

Whether their jewels are worth $10,000 or $10-million, owners need to make sure they have adequate protection, says Mr. Sevdalis. Ideally, this includes insurance coverage for lost or stolen jewellery, something that’s typically part of a home insurance policy but isn’t always enough to cover the value of items that have gone amiss.

“People need to be careful about assuming how much coverage they have,” says Mr. Sevdalis. “Their homeowner policy may include content coverage for $2-million, so they assume that would cover up to $2-million of their jewellery, which is very rarely or never the case.”

Most homeowner policies provide between $10,000 and $20,000 worth of coverage for lost or stolen valuables, including jewellery, he says, noting that Aviva has a policy that provides up to $50,000. One way to make sure there’s enough insurance for jewellery is to “schedule” additional coverage for these items. Doing so also usually means no deductible applies when it’s time to make a claim, he says.

Jewellery owners also should ask about coverage limitations for items lost during a trip, and whether the insurer intends to settle a claim with cash or insist that the lost jewellery be replaced with a similar item.

“When people buy insurance on a blanket basis, they can become a little lethargic in expanding the coverage when they purchase new items,” he says. “We find that clients rarely forget to insure their newly purchased items, but it may be two or three weeks [after the purchase] when we get the call, which means there may be a period when they have a gap in coverage.”

Buying additional insurance for specific pieces of jewellery also allows owners to have a 150-per-cent clause written into their contract, says Lisa Ivan, national business leader, private client services, at Marsh Canada. This is important because it takes into account the increasing value of the lost item and the potentially higher cost of replacing it.

“This could be a bank safety-deposit box, or a vault or safe in a home that’s connected to a central alarm system and monitored by a home security service,” she says. These measures “also give you the ability to negotiate a lower rate with your insurance provider.”

For those looking to put their high-value jewellery in maximum-security storage, a new service launched recently by Hong Kong-based Malca-Amit Group of Cos. could be the answer.

For decades, Malca-Amit has been providing vault storage and courier services to jewellery manufacturers and banks. Last year, the company started extending similar services to high-net-worth individuals through its UltraVault sites – highly secured storage that gives clients 24/7 access to their valuables.

Malca-Amit opened its first Canadian UltraVault location this year in Toronto, bringing the number of sites to seven, including two in the United States and one each in Hong Kong, Singapore, Japan and Britain.

“We offer private storage with full insurance,” explains Artzi Korostelev, general manager at Malca-Amit Canada Inc. “By comparison, a bank’s safety-deposit box service just provides storage in the bank’s vault but does not fully insure the contents of your safety deposit box.”

Insurance of UltraVault sites and their contents are underwritten by Lloyd’s of London, which performs regular security audits, says Mr. Korostelev.

“We adhere to the highest international levels of security, with armed guards on site at all times and state-of-the-art monitoring systems,” he says. “We would surpass banks’ security measures.”

UltraVault also comes with services tailored to the needs of its wealthy clients, says Mr. Korostelev. Need your diamond necklace for a gala tonight? Malca-Amit will bring it to you via an “undercover” courier. Want your baubles delivered to your second home in Paris or New York? Malca-Amit can do that, too.

Protecting high-value jewellery also means ensuring it goes to the right people after the owner has died, says Martine Tollefson, an estate planner with MacMillan Estate Planning Corp., in Calgary.

“Sometimes the monetary value of the jewellery doesn’t matter so much as the sentimental value,” she says. “Then it becomes a question of who should get it when I pass away – should it be my oldest daughter or my granddaughter – and making sure it doesn’t go to the wrong person.”

Ms. Tollefson adds with a laugh: “What we hear fairly often is, I don’t want my daughter-in-law to get this.”

She recommends listing high-value – monetary or sentimental – jewellery in a will, with specific instructions on what should happen to each item. This ensures the valuables end up in the hands – or on the neck or wrist – of the right people, says Ms. Tollefson, who also suggests getting high-value jewellery appraised before listing it in a will.

“It’s better if you don’t give them away in your lifetime, but that you list it in your will,” she says. “If they gift an item in their lifetime, it is now gone – as estate planners we protect the testator first and advise them not to give away ‘too much’ in case they need it later.”

A good strategy for keeping high-value jewellery in the family is to hold it in trust for future generations. This will help prevent a son or grandson down the line from handing it over to a wife or girlfriend.

“If we think of objects like wedding rings that have been in the family for generations, trusts are very useful for keeping them in the bloodline,” she says.