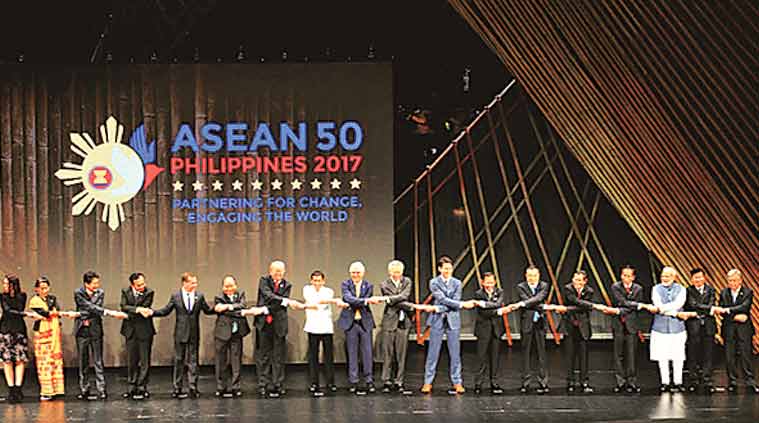 At the ASEAN summit in Manila in November 2017. (File Photo)

A Ramayana festival, Ramayana stamps, specially-made Khadi jackets, and, of course, the Republic Day parade — India is planning a grand show for the 10 Association of South East Asian Nations (ASEAN) leaders, who will be in the capital from January 24 to 26.

Officials said a Ramayana festival, which has a special connect with many of the ASEAN countries, has been curated by top artists. Sources told The Indian Express that this was an idea suggested by Cambodian Prime Minister Hun Sen at the ASEAN-India summit in Manila in November last year. He had said the depiction of the epic is a potent symbol of integration of the South East Asian region with India.

With mythology and folklore connecting the countries, various forms of Ramayana are prevalent in the South East Asian region. Sources said troupes performing Ramakien in Thailand, Pha Lak Pha Lam in Laos, Yama Zatddaw in Myanmar, Kakawin Ramayana in Indonesia and Hikayat Seri Rama in Malaysia will be part of the festival.

New Delhi is working with embassies of the 10 ASEAN countries to organise the Ramayana Festival, which will showcase the cultural interpretations of Ramayana across the ASEAN countries and India. “The similarities of mudra (hand gestures) in our dance forms across ASEAN and India will also be showcased during this festival,” said officials, adding that it will be held in the capital’s Kamani Auditorium.

The government has received confirmation that all the 10 countries — Indonesia, Malaysia, Philippines, Singapore, Thailand, Brunei, Cambodia, Laos, Myanmar, Vietnam — will be represented by their heads of state or government at the ASEAN-India commemorative summit on January 25, marking 25 years of partnership.

The summit will be hosted at the Taj Palace Hotel in Delhi’s Chanakyapuri area. The leaders will release a commemorative Ramayana postage stamp on the occasion.

The day will start with a banquet hosted by President Ram Nath Kovind, followed by a leaders’ retreat at Rashtrapati Bhavan which will be hosted by Prime Minister Narendra Modi.

Sources said the leaders will be given the choice of wearing Khadi jackets for either the leaders’ retreat or the gala dinner which will be held after the plenary session on January 25. “A final decision on this is yet to be taken,” said a source.

For the Republic Day parade, a massive stage is being constructed and the leaders’ seating arrangements are being finalised — there is no precedent for seating 10 special guests at the event.

The 10 leaders and their spouses — at least six of them are expected to be accompanied by their spouses — will be seated with Prime Minister Modi, President Kovind and Vice President Venkaiah Naidu. According to sources, at least 22 people, including the ASEAN secretary general, will share the stage. After the parade, the ASEAN leaders will attend the President’s At Home at Rashtrapati Bhavan.

A tight timeline for the arrival of all 10 ASEAN leaders, the President, Vice President and Prime Minister is being worked out by protocol officials so that the parade can start as per schedule. Also, to avoid any embarrassment due to unseasonal rainfall — as in 2015, when then US President Barack Obama was the special guest — the officials are planning to cover the dais.

Since the presence of ASEAN leaders will be watched closely by Beijing, the government is planning to have a marching contingent from the ITBP, which guards the India-China border. If that works out, they will be marching after a two-year gap. The focus will be on display of India’s naval prowess, since maritime security is an integral component of New Delhi’s engagement with the ASEAN countries.

Since at least six of the leaders are expected to be accompanied by their spouses, a separate programme is also being worked out for the latter, including visits to some tourist spots, crafts’ village or handicraft centres in the capital. “These will be incorporated depending on common interests and convenience,” said a source.