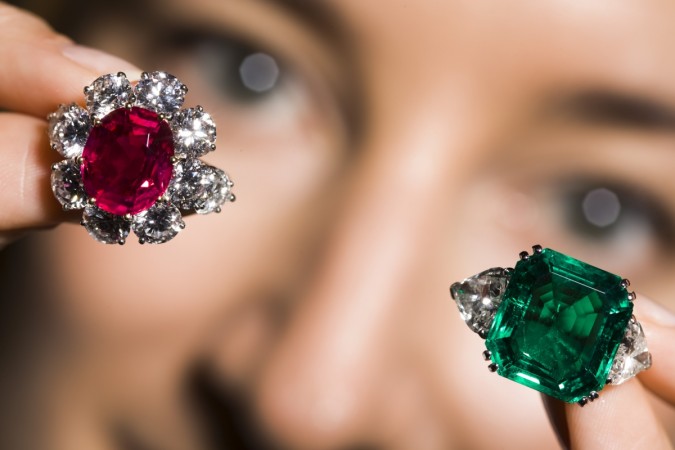 A model displays a 7.03 carat oval-shaped Burmese ruby set in a diamond cluster ring and a 12.79 carat Colombian emerald and diamond ring during an auction preview at Christie’s in Geneva November 13, 2009 (Representational image).Reuters file

BlueStone, the jewellery portal co-founded by Gaurav Singh Kushwaha and Vidya Nataraj, has raised $30 million (about Rs. 200 crore) in Series D funding from a group of investors, including Singapore-based RB Investments, which has invested for the first time in the Ratan Tata-backed e-commerce website.

The online jewellery business was in the spotlight two months ago when Tata Group company Titan announced acquiring a majority stake in CaratLane, BlueStone’s rival.

Kalaari Capital, IvyCap Ventures and RB Investments participated in the latest round of BlueStone’s funding that was led by IIFL and Accel Partners. Other investors in the portal are Samaa Capital and Dragoneer Investment Group.

BlueStone said the money would be used for brand positioning, among other areas.

“It will be used to strengthen our core value proposition, which are the products and designs that we have under the brand BlueStone,” Kushwaha told DealStreetAsia.

BlueStone has raised about $60 million till date in its four rounds of investing, commencing with $5 million raised in 2012, followed by $10 million two years later and $15.8 million last July.

The portal is one of the many e-commerce investments of Ratan Tata who invested in BlueStone two years ago.

Founded in 2011, BlueStone claims to have a collection of about 4,000 designs to cater to jewellery buying-preferences of women.

On July 14, Titan announced closure of the 62 percent stake acquisition in Carat Lane Trading Private Limited for Rs. 357 crore in a filing to the Bombay Stock Exchange (BSE).

Carat Lane Trading Private Limited is involved in designing, manufacturing, trading and retailing of gems and jewellery, said Titan in its filing and added that Carat Lane’s 2015-16 revenues stood at Rs. 141 crore. The Tata Group company, which sells jewellery under the brand name Tanishq, said Carat Lane’s capabilities and its presence in the online jewellery space would complement its core business. Jewellery business contributes about 75 percent to Titan’s overall revenues.

Vidya Nataraj is also the co-founder of bespoke men’s tailoring firm Tailorman, the other founder being Gautam Golchha of Silver Crest Clothing. Reid & Taylor, Raymond (Made-To-Measure), PN Rao and Manyavar are the other major players in the fast-growing made-to-measure menswear market in India.