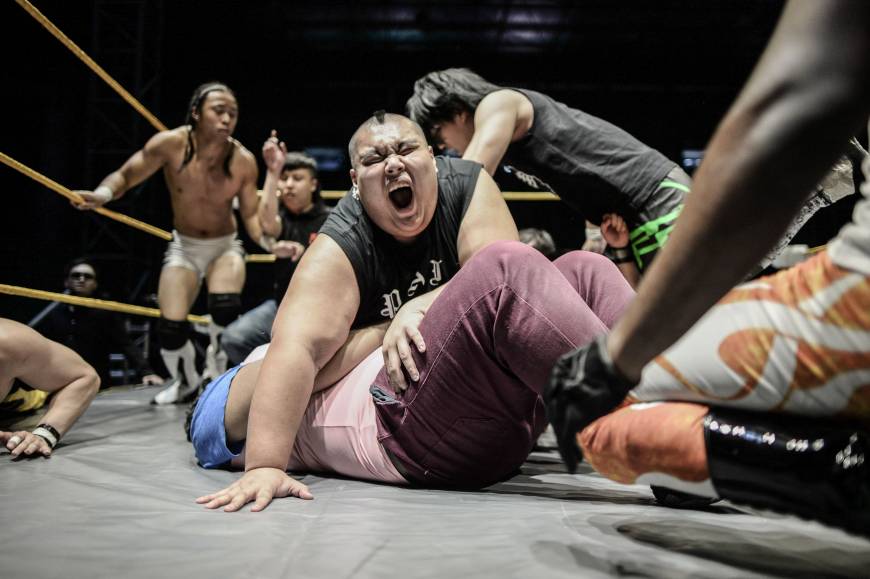 KUALA LUMPUR – Kenneth Thexeira is a mild-mannered writer for an interior-design magazine by day, but on certain nights his alter ego bursts forth in golden tights and a baby-blue cape: enter “The Eurasian Dragon.”

The 27-year-old Singaporean is part of a small but growing community of Southeast Asians who drop-kicks and body-slams in hopes of building a “pro wrestling” scene similar to the pretend battles of the U.S.’s World Wrestling Entertainment (WWE).

“To me, it is one of the most challenging mediums of live entertainment,” said Thexeira, who got hooked as a kid in Singapore watching broadcasts of stars like “The Rock” — known today as Hollywood actor Dwayne Johnson.

“The pressure, the high standards of fitness and showmanship required — it is an absolute rush. I love the rush. I love entertaining the fans,” he adds.

The American WWE spectacles, with their predetermined outcomes, tongue-in-cheek “hero-vs-villain” storylines and acrobatic smackdowns, have had a modest Southeast Asian fan base since the 1980s.

While Mixed Martial Arts (MMA) and other true combat sports have taken off worldwide, including in Asia, WWE-style wrestling entertainment has largely failed to gain a regional foothold aside from an established circuit in Japan.

But over the last four years, fledgling wrestling schools, national federations and amateurish tournaments have mushroomed, mainly in Singapore, Malaysia and Thailand, allowing fans like Thexeira to leap from the bleachers and into the ring.

Thexeira, whose nickname references his Portuguese-Chinese roots, is a jovial character who packs a beefy 98 kilogram (216 lbs) onto his 179-centimeter (5-foot, 10-inch) frame.

One of the “good guys,” he burst into a small Kuala Lumpur arena during a regional event last month with a wide grin and his trademark high-fives around the audience, as lights flashed and music blared.

His scheduled bout soon degenerated into a rehearsed WWE-style free-for-all, in which Thexeira and some allies exchanged jarring smackdowns with adversaries including “King Michael” and “Bitman,” drawing cheers and jeers from the small yet vocal audience of about 130 fans.

But a handful of recently formed associations in the region have begun cooperating on international tournaments like the Malaysia gathering, which also brought a few pro wrestlers from as far as Russia and the United States.

Attendance has climbed into the hundreds at some of these events, say wrestlers, who hope more international gatherings can generate greater exposure.

“A lot of people in Malaysia don’t know there’s professional wrestling in Malaysia, they don’t know where to go,” said Ayez Shaukat Fonseka, a wrestler who in 2014 founded Malaysia Pro Wrestling, the country’s association.

Wrestlers and organizers, often one and the same under the movement’s DIY ethic, hope to eventually land the big prize of a television broadcast deal, though none is yet in sight.

“If everybody plays their cards right and there are people behind the scenes that really know what they’re doing, the next big territory in pro wrestling is going to be Southeast Asia,” said Sonjay Dutt, an Indian-American professional U.S. wrestler who calls himself “The Playa from Himalaya.”

“Even ‘The Rock’ wasn’t ‘The Rock’ immediately. It took some time for him to really develop and produce his talent,” he said.

A few women in the region also are getting into the act.

Malaysia’s Alydia Abdul Wahab, whose ring name is “Scarlet Lyd,” interrupted one of the Kuala Lumpur matches between two male competitors only to be lifted off her feet and slammed head-first into the mat.

A local media company employee, she dreams of stardom in the WWE.

“Wrestling is different. It’s like a performance unlike other sports, and I wanted to do something a normal girl wouldn’t do,” she said.

Insiders said established Asian wrestlers can make between $100-$500 per match.

But many do it largely to live out their ring fantasies, performing for little or no pay. Injuries are not uncommon despite the choreographed sequences.

Organizers and wrestlers are harnessing social media to reach fans by uploading videos of matches, the over-the-top trash talk, and “good vs bad” shtick, which sometimes bear a uniquely Southeast Asian flavor.

Thexeira once shoved a durian — the pungent fruit popular in the region and which is encased in a painfully spiky shell — into an opponent’s backside.

“This is Southeast Asian wrestling. We all have our local spins on it,” he said with a grin.