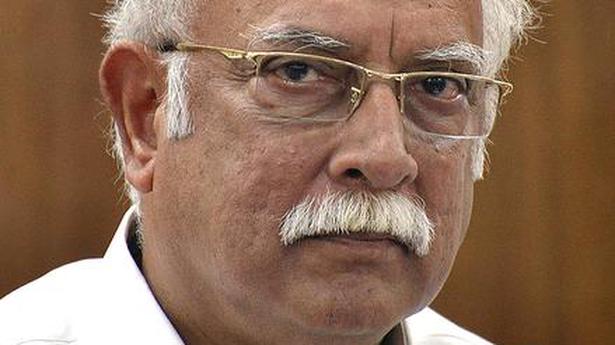 Union Minister for Civil Aviation P. Ashok Gajapathi Raju has said India ranks third in the world in terms of expansion of domestic aviation sector. Addressing the media at the international airport here on Sunday, Mr. Ashok said the aviation sector was formidably growing and expanding its network to provide more regional connectivity through higher penetration.

“From a mere 75 centres in 70 years, the NDA government has added 80 new flying destinations in the last three years alone,” he pointed out.

After formally launching IndiGo’s flight to Hyderabad and Bengaluru, he received the first ticket and boarding pass from the airline’s president Aditya Ghosh for the Hyderabad flight.

Mr. Aditya Ghosh said that his company achieved the rare distinction of operating 1,000 services to 47 destinations every day.

He announced IndiGo services to Rajamahendravaram in a week and to Vijayawada by March.

The current tariff is pegged at ₹3,500 and ₹1.500 for Hyderabad and Bengaluru respectively.

MPs V. Varaprasad (Tirupati) and N. Sivaprasad (Chittoor) sought international services from Tirupati to Dubai and Singapore, in view of the huge number of travellers from Chittoor, Nellore, and Kadapa districts to the regions.

MLC G. Muddukrishnama Naidu urged the Union Minister to reimburse the ₹7.5 crore spent by TUDA for the development of greenery in the vicinity of the airport.

Tirupati airport director H. Pulla said 44 services would be in place by this summer.