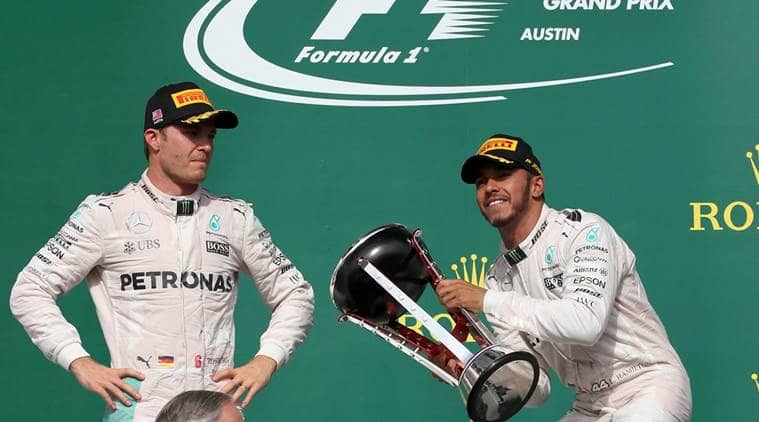 Formula One championship leader Nico Rosberg is refusing to be rattled by reliability concerns as he prepares for his first ‘match point’ of the season in Mexico this weekend.

“That’s not within my control so I completely block that out,” the Mercedes driver told reporters after finishing second to team mate Lewis Hamilton in Sunday’s U.S. Grand Prix.

A victory in Mexico City on Sunday, coupled with Hamilton failing to score, would leave the German enjoying an unassailable lead of 51 points.

“Of course I’m aware of that, it’s an obvious calculation which everybody is telling me and it’s great…but for me the approach is keep it simple,” said Rosberg.

“So just look for the race win and concentrate on what’s at hand for the weekend.”

While Rosberg, who won the last three races of 2015 including Mexico, has enjoyed a remarkably trouble-free campaign, Hamilton has been plagued by reliability issues.

The Briton said on Sunday that he had been on tenterhooks every lap, haunted by the possibility of another engine failure like the one that robbed him of 25 points in Malaysia.

“In the cockpit all I could think about was the car making it to the end,” said the Briton. “Every single lap I was thinking something might happen.”

Mercedes motorsport head Toto Wolff saw “very stressful” weeks ahead with the team praying that the drivers could fight for the title without mechanical problems playing a part.

“The scare is there,” he told Reuters.

“After what happened in Malaysia…there is a bit of trauma that stays within you. We don’t want to interfere in their fight.”

Wolff said Mercedes had decided against introducing a further engine upgrade and believed the battle would go all the way to Abu Dhabi.

Hamilton had a difficult weekend in Japan, the race before Austin, with his track performance overshadowed by a media spat, but the Briton was back to his best at the Circuit of the Americas.

Wolff saw more swings of the pendulum ahead.

“It has been changing from weekend to weekend,” he said. “In Singapore it was Nico’s weekend, then

Malaysia was Lewis’s and he was awesome, and it was again Nico’s weekend in Suzuka and here it is Lewis.

“It keeps bouncing every single weekend.”