Russia retook the top spot from Saudi Arabia in crude supplies to China last month as OPEC producers are flirting with the possibility of extending a deal to curb production.

The world’s largest energy consumer increased imports from Russia by about 9.3 percent to 4.69 million metric tons in March from February, according to data released Tuesday by the General Administration of Customs. That’s also up 0.9 percent from a year earlier. Saudi Arabia, the biggest crude exporter, retreated to the third-biggest seller last month from No. 1 a month earlier as shipments fell 4.6 percent to 4.55 million tons. 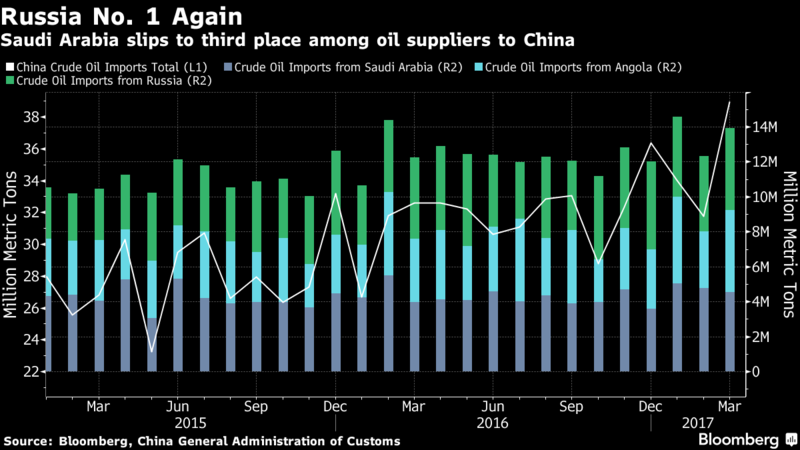 Russia and Saudi Arabia along with other major producers have been competing for a bigger slice in China amid the output cut deal led by the Organization of Petroleum Exporting Countries. The Asian nation imported a record amount of crude last month, topping the U.S. as the world’s biggest buyer during the first quarter. While some of OPEC members are considering prolonging the historic agreement beyond June when the group and its allies meet next month, it will be closely watched whether the non-OPEC producer Russia will join again.

“For sure, Russia has been focusing on China as a key market,” said Virendra Chauhan, an oil analyst at Energy Aspects Ltd. in Singapore. The country “will certainly focus on the Chinese market going forward, we don’t expect them to concede market share here. It will be difficult for Russia to extend the deal across the second half, given output typically rises in the second half.”

Energy Minister Alexander Novak will hold talks with Russian oil companies this week before his meeting with OPEC and non-OPEC counterparts in Vienna on May 25. Russian production is typically flat or lower in the first half of the year, according to a report by Sberbank CIB.

Angola, the third-biggest seller to China in February, rose to No. 2 in March, boosting sales by 43 percent from a month earlier to 4.67 million tons, customs data showed. China’s total crude imports climbed 11 percent to a record 9.21 million barrels a day last month from February, according to customs data released April 13. Shipments during the first quarter rose 15 percent to almost 105 million tons, or about 8.5 million barrels a day.
Source: Bloomberg