‘I will work hard to change the colour of my medal at next Olympics.’ 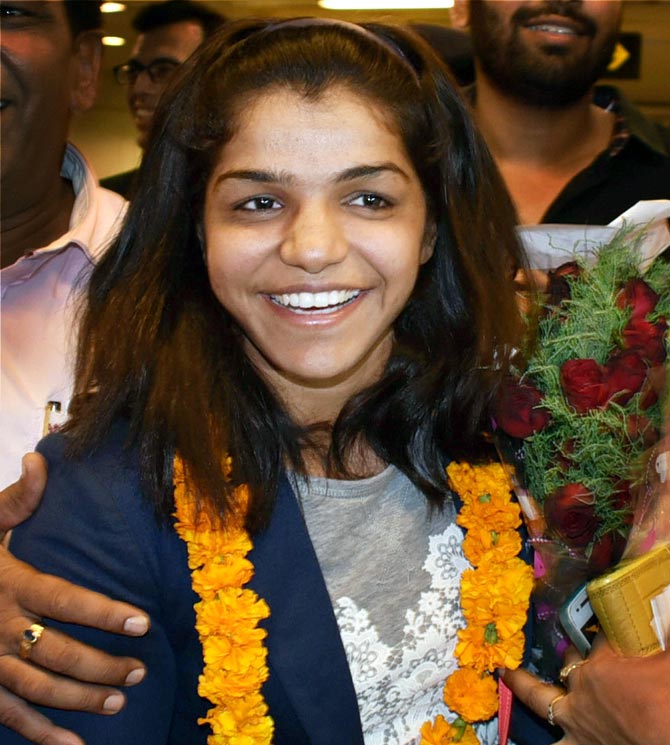 A rousing reception in New Delhi, after the freestyle wrestler arrived from Rio de Janeiro in the wee hours, was followed by another grand welcome by the Haryana government.

Sakshi, who ended India’s medal drought at the Rio Olympics, was greeted by her parents, relatives and ministers of the state government at the Indira Gandhi International Airport in New Delhi.

The 23-year-old, who is the first woman wrestler from India to win an Olympic medal, then travelled to Bahadurgarh in Jhajjar district, where she was felicitated by Chief Minister Manohar Lal Khattar.

The victory procession, with the bedecked vehicle blaring songs about ‘Haryana ki beti Sakshi Malik’ (Haryana’s daughter Sakshi Malik) made its way through villages and narrow roads lined up by scores of people.

Despite being jet-lagged and sleep deprived, Sakshi waved at the crowds who danced, garlanded and took selfies with her.

“My 12-year long dream has been fulfilled. But I will work hard to change the colour of my medal at next Olympics,” Sakshi said. 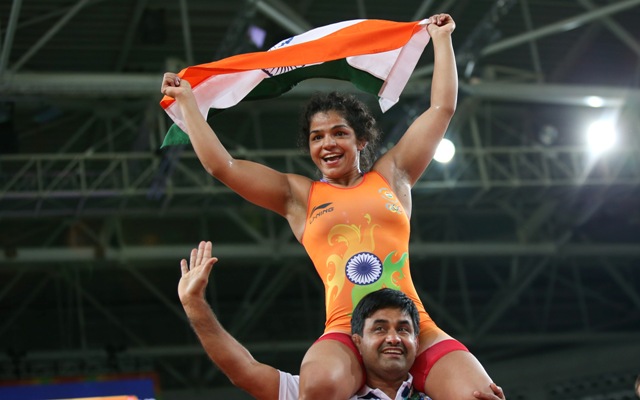 Sakshi, who clinched a bronze in the 58-kg category freestyle wrestling event, proudly displayed the medal to the cheering crowds enroute. Besides her parents, brother, sister and other family members, women wrestlers from her academy in Rohtak were also there to welcome her.

“It’s a proud moment for us that two of our daughters won medals on Raksha Bandhan festival. Sakshi Malik from Haryana and Sindhu (asks others what is her name) … P V Sindhu from Karnataka (Sindhu is from Hyderabad),” he said.

Notably, the Khattar government had also announced a Rs 50 lakh reward for Sindhu.

“Our government is taking a number of steps for the promotion of sports. Sakshi has made everyone proud including her country, her state, her coaches, her town Rohtak and her family,” Khattar said in the presence of Sakshi’s family members. 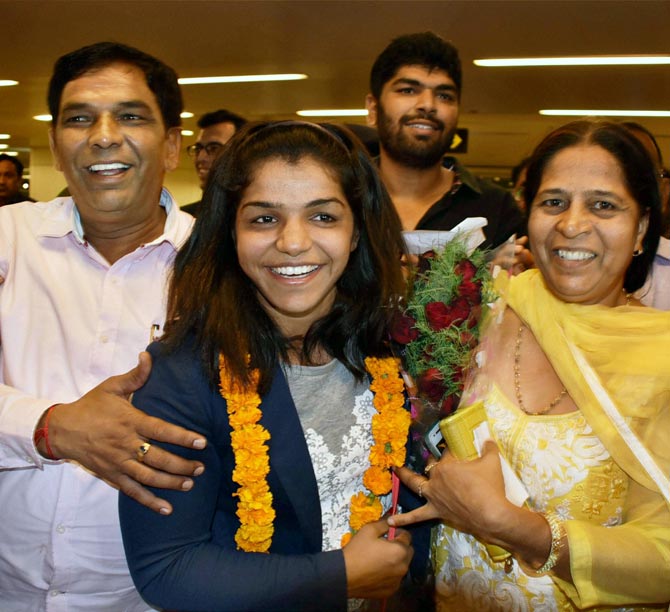 IMAGE: Rio Olympics bronze medallist Sakshi Malik being greeted by her family on her arrival at the Indira Gandhi international airport in New Delhi. Photograph: PTI

The chief minister said Sakshi, who is employed with the Railways, has been promised a promotion by its employer.

“We have also offered her a Class II job in the Haryana Government. She has said that she will think over it and decide,” Khattar said.

Sakshi thanked everyone for their support and best wishes.

“I want everyone to support me in future as well so that I can win more medals for my country,” she said.

She was also honoured with a traditional ‘pagri’ at Bahadurgarh. Khattar announced to set up a sports nursery and stadium at Mokhra Khas, which is known as ‘pehalwan village’.

“To make Haryana a hub of sports and to promote sports, we had announced a new sports policy, under which we took a number of steps to create better facilities for the sportspersons including setting up new sports nurseries and stadia. Efforts will be made to scout talent in the hinterland,” Khattar said.

“Vyamshalas will be set up on two acres of land in villages, and in the first phase 1000 villages will be covered. In future, we are going to recruit 1000 coaches and yoga teachers so that at village and block level sports is encouraged,” he further said.

Attacking the previous governments, Khattar said stadia were constructed in the past but adequate facilities were not provided. About BJP government’s sports policy, Khattar said, “We have decided to catch them young. We will also set up a sports university.”

Khattar said the Haryana government has decided to give Rs 6 crore to an Olympic gold medal winner.

“After Haryana, people say Singapore has the highest prize money of 7.5 lakh dollars for gold medal winners, which comes to Rs five and a half crore,” said Khattar, who also announced Rs 10 lakh each for the wrestler’s two coaches.

He said that Sakshi’s feat would encourage other girls to do better in their chosen field. All the athletes from state, who participated at the Rio Olympics, would be given Rs 15 lakh each, Haryana’s Sports Minister Anil Vij announced after arriving from Rio.

Haryana is infamous for its skewed sex ratio and Sakshi said that girls should be provided equal opportunities.

“The girls should be given equal opportunities like boys to express their talent and make the country proud in their chosen field,” she said.

Sakshi’s father Sukhbir Malik became emotional when he met his daughter and saw her medal.

“I am proud of her achievements. In fact, not just me, the entire country is proud of her. She has made the country and her state proud. Her medal belongs to India,” he said. 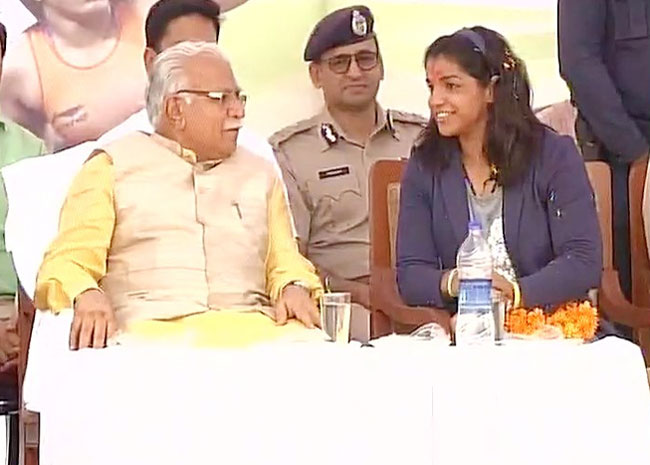 He spoke about the time when people would tell him that wrestling was not a sport for the girls.

“Sometimes, some people used to say that she is a girl and this is not good for her. But in 2010, when my daughter won a medal in an event in Russia and later won an Asian Championship, everyone wanted to be like Sakshi and emulate what she had done,” Sukhbir said.

A number of people visited the wrestler’s house to congratulate her family.

Before heading to Mokhra, Sakshi visited Ismaila village to meet her maternal uncle.

“The mindset that girls are any less than boys in talent has changed now. Girls are shining in all fields, be it sports or studies. They are equal and in some cases far ahead. I think we need to encourage girls and give them equal opportunities to realise their dreams,” a village elder said.

Accompanied by her mother, Sakshi travelled in an open truck, which had pictures of Khattar on one side with felicitation messages. Huge crowds had lined up at different places with garlands for Sakshi. People danced to the beats of drums to greet her.