Long-time marine salvage specialists Tsavliris Salvage were pretty busy during the fourth quarter of the year. A summary of their activities can be seen below: 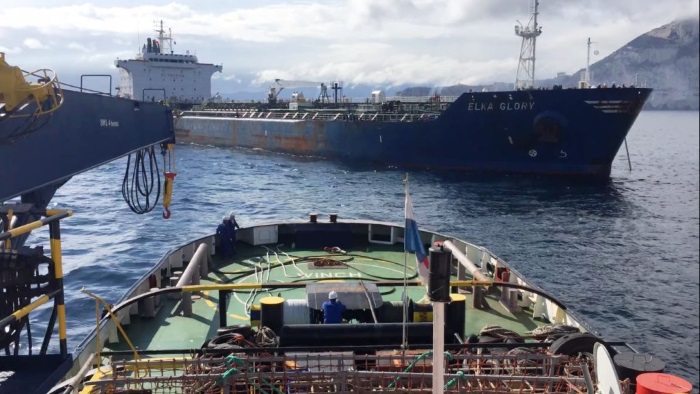 On 28 September 2016, the salvage tug “TSAVLIRIS HELLAS” (BHP 9,600 –TBP 121) was dispatched from her permanent salvage station at Ponta Delgada, Azores, to the assistance of the Chemical/Products Tanker “ELKA GLORY” (GT 27,612 – DWT 44,598), fully laden with 42,000 MT of ultra-low sulfur diesel, immobilised about 1,000 miles west of Ponta Delgada due to stern tube leakage.
On 1 October the “TSAVLIRIS HELLAS” arrived at the casualty’s position and commenced escorting towards the discharging port Pembroke, UK. Subsequently, stern tube leakage deteriorated and the ship’s master requested towage connection.

However, due to prevailing adverse weather conditions (wind WNW 7B and heavy swell) the “TSAVLIRIS HELLAS” stood by the casualty awaiting weather improvement.
On 2 October, both wind and swell abated, tow connection was established and towage to Pembroke commenced at an average speed of 5 knots.

On 5 October, due to severe weather conditions (wind S 8-9B), the tug master altered course and reduced speed to avoid damages to tug and tow. During the evening weather conditions improved, the speed was increased up to 5,5 knots and the course was adjusted towards Pembroke.

Due to prevailing strong currents and adverse weather conditions the “NING HAI TUO 6001” was replaced on 27 October by AHT “TERASEA HAWK” (BHP 16,300 –TBP 203). On 8 November, upon completion of discharge, towage commenced and the convoy arrived safely at Singapore on 16 November where the vessel was delivered to dry dock tugs. 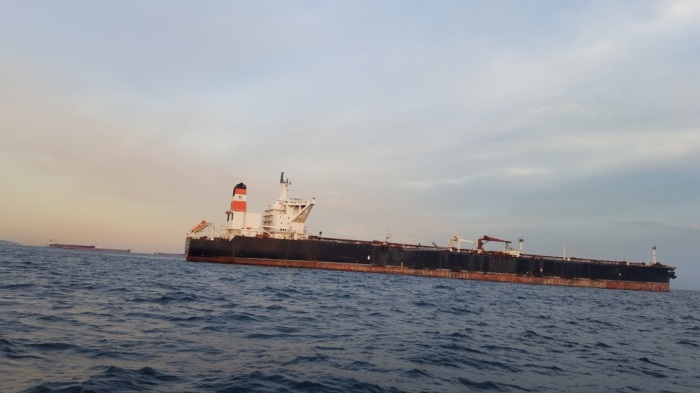 The Crude Oil Tanker (VLCC) “ARMADA ULYSSES” (GT 160.036 – DWT 310.137, employed as a bunker storage vessel while anchored off Tanjung Pelepas, Malaysia, was laden with 221,000 MT of fuel oil. On 9 October 2016 the vessel sustained sudden internal leakage from cargo tanks to double bottom tanks.
Tsavliris Salvage was contracted to provide salvage assistance and on 12 October a salvage team (consisting of project manager, naval architect, salvage master, salvage officer and salvage engineer) arrived at the casualty from Greece, Holland and Singapore. Local Malaysian agent was appointed to arrange “DSL permits” for the salvage equipment to be transferred on board as the vessel did not have port clearance/free pratique.
On 13 October, 44,464 MT of cargo was STS transferred to receiving tanker “NISSOS KYTHNOS”. With extra capacity available, the cargo was transferred internally from the affected tank No.4.
All cargo/ballast operations were within loadmaster sea conditions.

Prior to the next parcel discharge, the vessel required refueling which was not allowed at the specific anchorage position; therefore the owners requested approval from classification society and MPA for a voyage to Singapore. On 15 October, shifting was approved by all parties and the “ARMADA ULYSSES” sailed from Pelepas Titanium anchorage to Singapore eastern bunker anchorage B. An antipollution vessel was berthed alongside the vessel, whilst the salvage equipment arrived on board after refueling was completed.
A salvage plan was submitted and after two meetings with all parties concerned, it was decided that the vessel could remain at bunker anchorage B for a dive inspection. Upon receipt of the underwater inspection report by the MPA, casualty shifted to Raffles reserve anchorage for tank cleaning, inspections and repairs. On 19 October Tsavliris team and equipment demobilised.

Bulk Carrier “MINOAN COURAGE”
On 19 October 2016, Tsavliris dispatched salvage tug “SALVAGE TITAN” (BHP 9,200 – BP 117 T) from Kaohsiung to the assistance of Bulk Carrier “MINOAN COURAGE” (GT 40,014 – DWT 76,801) fully laden with soya beans, immobilised due to main engine breakdown in bad weather conditions (approaching typhoon “HAIMA”), in the South China Sea, approx. 50 miles south-east of Shantou, China. On 20 October the salvage tug “SALVAGE TITAN” arrived at casualty’s position. The power of “MINOAN COURAGE” had been partly restored and escort services commenced. On 21 October the power of the casualty was fully restored and the “SALVAGE TITAN” demobilised. On the same day the “MINOAN COURAGE” proceeded towards her destination under her own power. 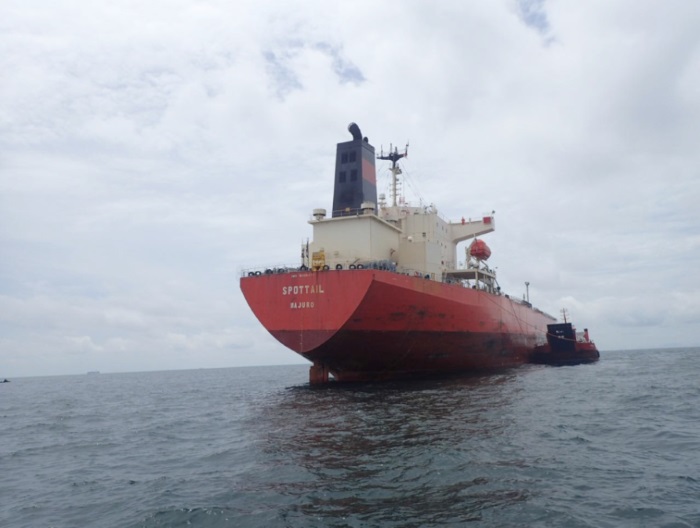 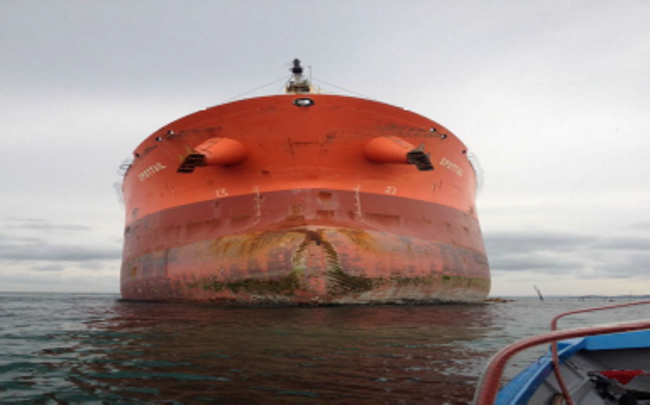 On 1 November 2016, the Products Tanker “SPOTTAIL” (GT 40,975 – DWT 74,997) on passage from Singapore to Sri Lanka, in ballast condition, ran aground on the north coast of Pulau Takong Besar, Indonesia. The port authority of Batam claimed reef and fish farm damage.

On 2 November, Tsavliris Salvage were contracted to provide salvage services. Personnel, crafts and equipment were dispatched i.e. two tugs (“Sumber Harbour” and “Sumber Z Marine” – BHP 3,200 –BP 45 each), a diving boat (with diving team in situ) and a salvage master.
On 5 November underwater inspection of the starboard side was undertaken. At the same time naval architects were working with ballast/de-ballast sequences, trim and stability calculations. The vessel remained aground with two tugs and the diving support vessel in the near vicinity. The 2,175 MT of fuel oil and 103 MT of diesel oil were transferred to the after part of the vessel.
The refloating plan was prepared and was submitted for approval.

On 8 November the vessel was successfully refloated with the assistance of tugs in combination with a ballast/de-ballast operation and proceeded to Nipa anchorage where both tugs were released.

On 9 November an underwater inspection (witnessed by class, insurers and owners’ representatives) was carried out and on 10 November another diving inspection was arranged to determine the condition of the grounding site seabed.
The salvage services were successfully terminated on 10 November, without any coral reef damage or pollution having occurred. 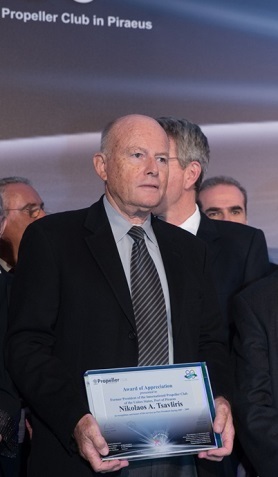 On the occasion of the celebration of 80 years of the Piraeus Branch of the Propeller Club, special awards were presented to Past Presidents for their contribution to the growth of the Club. The ceremony took place during the annual Amver Awards on 31 October 2016.

Nicolas A. Tsavliris who served as President of the Propeller Club from 2007 to 2009 said: “The existence of the International Propeller Club of the United States, International Port of Piraeus, makes us all proud. I feel privileged to have served as President for two years, from 2007 to 2009. I am confident that the Club will continue with its great work – and I wish it every success in the future. From my present position I remain devoted to its mission, aims and values”.
An outstanding world record number of more than 1,700 Greek-owned oceangoing vessels managed by more than 170 Greek shipping companies picked up awards and were honoured during this year’s ceremony recognising their participation in the programme launched by the US Coast Guard (USCG) 58 years ago and aiming at saving life at sea. The Piraeus Propeller Club in cooperation with the US Embassy and the USCG annually organises the Amver Awards Ceremonies, one of the biggest events of the Greek shipping year.

Great success for the 29th Tsavliris Christmas Reception in London
Tsavliris Salvage Group held their traditional Christmas Cocktail Reception at the Royal Thames Yacht Club in London, on 8 December 2016. With about 330 key players from various sectors of the shipping community attending, the annual event is a Christmas highlight for the London Maritime Community.

George A. Tsavliris addressed the impressive gathering of guests, welcoming and thanking them for their kind support over the years.
The event was also attended by a delegation from the Cypriot Ministry of Transport, Communications and Works. The Minister, Marios Demetriades, also addressed the guests and highlighted the strong ties Tsavliris has with Cyprus, their contribution to the shipping industry and his personal friendship which had developed over the years with Nicolas, George and Andreas Tsavliris.
Source: Tsavliris Group