Samsung Pay India launch detail revealed; it will take on Paytm, others 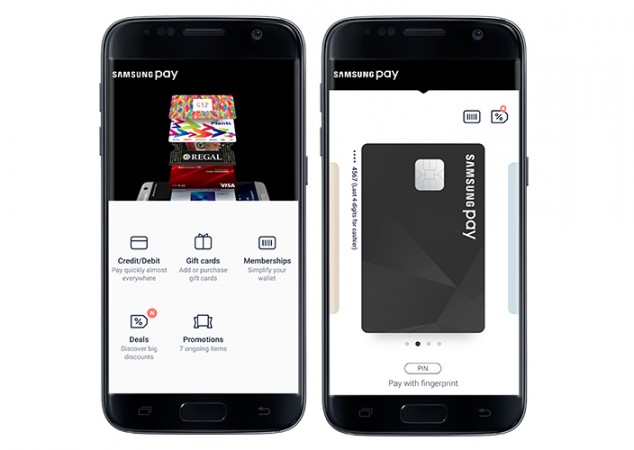 In what is being seen as a move to cash on the Narendra Modi government’s controversial demonetisation scheme to fight corruption and encourage cashless economy, Samsung is reportedly planning to introduce its mobile phone payment system — Samsung Pay – in India.

The South Korean electronics giant is testing Samsung Pay for the Indian market and it could be launched in the first half of 2017, according to SamMobile. The mobile payments solution is expected to come to Samsung’s mid-range smartphones.

[READ: This new feature in Samsung Pay will excite shoppers]

Samsung Pay is currently available in the US, Australia, Brazil, Canada, South Korea, Spain, China, Russia and Singapore. It is expected to expand to other markets, including India, UK, Malaysia, Russia and Thailand in the next few months.

Use of digital wallets has reportedly increased in India in the last one month after the government demonetised Rs 500 and Rs 1,000 currency notes in an attempt to curb black money and encourage cashless economy.

The scheme invited a huge backlash from the public, as people couldn’t buy things with their old currency notes and withdrawal of cash from the bank and ATMs was restricted to a certain amount.

However, there is no restriction on online cash transfer, which indirectly boosted digital wallets in the country. It was a boon to mobile payment solutions like Paytm and Freecharge, but Samsung Pay will soon give them a stiff competition.

India has a huge prospect in terms of use of digital wallets as smartphone sale in the country is continuously growing unlike in developed countries where mobile phone market is saturated. Samsung recently tied up with several Indian banks like HDFC, SBI, Axis, ICICI, Yes Bank, Andhra Bank, Karnataka Bank, Punjab National Bank and Vijaya Bank for its My Money Transfer app for Tizen-based Z1 and Z3 smartphones.

The app enables users with internet banking to transfer money from their bank accounts anytime, and check details like account balance and recent transactions even without login in to internet.