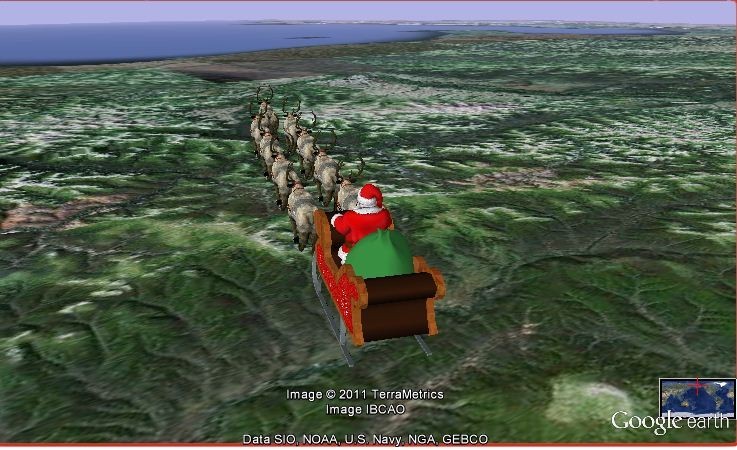 As NORAD reports a record holiday and Google Earth wraps up its video specials, check out some of the best Santa tracking videos of 2011, from his travels through Rome to his visit to the Great Wall of China.www.noradsanta.org

On December 24, Santa Claus started his journey from the North Pole along with Rudolph and eight other reindeer to give gifts to millions of children across the world on Christmas.

The members of NORAD (North American Aerospace Defense Command) are tracking the exact location of Santa through the Santa Tracker. According to the Facebook page, Santa was spotted in Sydney at around 8.22 am EST. After Sydney, Santa was also spotted near Korea and China at around 9.30 am EST. Santa is now moving towards Irkutsk Oblast in Russia and should reach there by 9.37 am EST.

After crossing Colombo, Sri Lanka, and Addu City in Maldives at around 12.05 pm ET, Santa moved towards Bangalore in India.

Santa began his yuletide journey from the North Pole and before leaving he gave a kiss to Mrs Claus. During his joinery, Santa will travel to several destinations around the world, including Funafuti in Tuvalu, Seoul in South Korea, Jakarta in Indonesia, Singapore, Kathmandu in Nepal, Mumbai in India, Dubai in UAE, Johannesburg in South Africa and Vancouver in British Columbia.

Google Maps and the NORAD Santa Tracker will provide the live streaming that will track the whereabouts of Santa. According to Google Maps, Santa has delivered millions of gifts until now. At around 5.08 am EST (3.39 pm IST), Santa was at Provideniya in Russia.

Where to track Santa Live?

NORAD Santa Tracker has been giving information about St. Nick for the past 61 years. Every year, more than 1,000 of volunteers gather to track Santa’s journey.