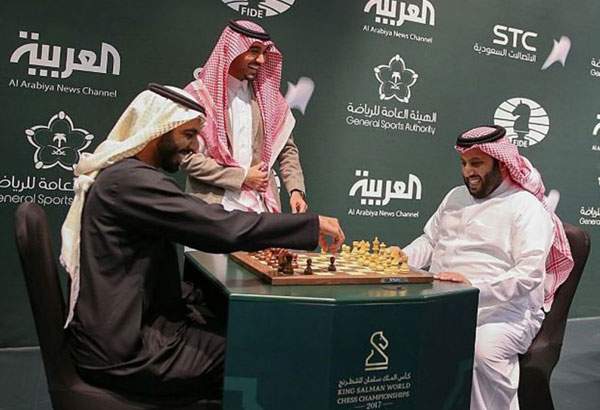 DUBAI — Saudi Arabia is hosting a world chess tournament for the first time on yesterday nearly two years after the country’s top cleric issued a religious edict against playing the board game. Politics have also interfered, with players from Israel and Qatar missing the tournament due to regional tensions.

Saudi Arabia’s top cleric, Grand Mufti Sheikh Abdulaziz Al Sheikh, said in early 2016 that chess is “forbidden” in Islam because it wastes time and can lead to rivalry among players. Similarly, top Iranian clerics have also decried the game, saying it can lead to gambling, which is not permissible in Islam.

The mufti’s comments at the time led to an outcry on social media by young Saudis who defended the game as intellectually stimulating. Muslims, who introduced chess to Europe, have been playing the game since the 7th century in Persia.

Despite the mufti’s past criticism, Saudi Crown Prince Mohammed bin Salman has pushed for greater social openings, including lifting a ban on women driving that goes into effect next year, allowing concerts and movies, and easing rules on gender segregation.

The chess tournament, however, has also been hit by regional politics. Israelis say Saudi Arabia ignored requests by Israeli players to obtain visas to participate in the tournament. Israel and Saudi Arabia do not have diplomatic relations.

Meanwhile, players from Qatar and Iran, which have strained ties with Saudi Arabia, have been granted visas to participate in the tournament. However, Qatari players will not compete in the championship because Qatar’s chess federation said organizers demanded that the players not display the Qatari flag during the competition.

A statement issued by the World Chess Federation said that visas for players from Iran and Qatar were secured. It made no mention of Israeli players.

“The fact that players from Iran and Qatar may decide not to participate, after consulting their own authorities, is clearly their own individual decision,” the statement said.

The statement added that Saudi authorities had proposed that for security reasons the Qatari players should play under the organization’s flag, but that the issue was resolved and the Qatar Chess Association was informed that their players would play under their own flag.

The tournament, called the King Salman World Rapid and Blitz Chess Championships, runs until Saturday. It includes around 240 players — both men and women — from 70 countries. There are 16 players from Saudi Arabia.

The world’s top three chess players from Norway, Armenia and Azerbaijan are participating in the tournament. There is also a women’s chess tournament taking place alongside the open championship.

Women are reportedly being allowed to wear dark blue or black formal trousers and high-necked blouses, avoiding Saudi rules of dress that require female residents and most visitors to wear loose-fitting, long robes known as “abayas.” Most Saudi women also cover their hair and face with veils.

James Dorsey, a Mideast scholar and senior fellow at the University of Singapore, said the kingdom was granted hosting rights by the World Chess Federation with a $1.5 million check that amounts to four times the federation’s standard annual fee.