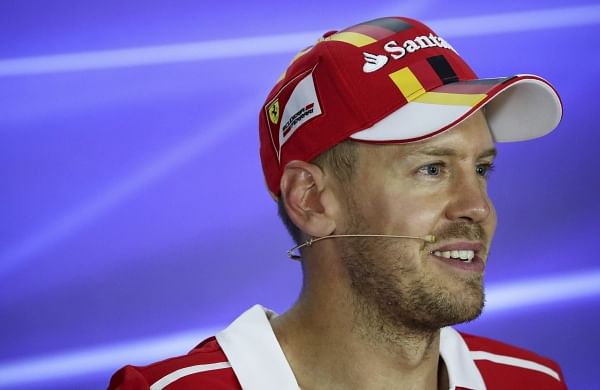 SINGAPORE: In the space of three races, Sebastian Vettel has dropped twice as far behind Lewis Hamilton as he was ahead of him.

After winning the Hungarian Grand Prix in late July, Vettel led by 14 points, with both drivers on four wins heading into the summer break.

But after crashing out on the first lap in Sunday’s Singapore GP, the Ferrari driver trails Hamilton by 28.

“That was very disappointing and it was definitely not the result we were expecting,” Ferrari team principal Maurizio Arrivabene said. “But it doesn’t mean that the battle is all over, just that it has become more difficult.”

Yet it might seem to Mercedes that, for all of his experience, Vettel is throwing away the Formula One title.

“Clearly we would not feel comfortable in Ferrari’s shoes,” Mercedes head of motorsport Toto Wolff said. “But this is not the time for cheering.”

Hamilton has won all three races relatively comfortably since the championship resumed in August, and with only six GPs remaining Vettel faces a huge task to stop Hamilton.

“We guarantee that we will be fighting right to the final corner of the very last Grand Prix of the year,” Arrivabene said.

Mercedes is still expecting a challenge.

“This result doesn’t change a thing in the big picture,” Wolff said. “If anything, it’s a stark reminder that there are six more opportunities for the luck to go against us this season, just as it happened to Ferrari.”

But it will be abundantly harder now for Vettel because, unlike last season, Hamilton has so far not retired from any races. Although he has failed to finish on the podium four times for Mercedes this season, that is the same number as Vettel’s finishes outside the top three.

After winning three of the first six races, Vettel’s grip has loosened with only one win in the past eight.

Points have been thrown away, too.

At the British GP in July, Vettel looked at least assured of a podium finish until an unexpected tire problem at the end of the race bumped him down to seventh.

On Sunday, he had a great chance to win starting from pole position on a hard-braking track much more suited to Ferrari than Mercedes.

A few seconds later, he was out of the race.

Vettel made a hasty error of judgment trying to cut off Max Verstappen heading into the first turn and ultimately caused a crash that also took out Ferrari teammate Kimi Raikkonen — who had made a blistering start — Verstappen and Fernando Alonso.

With both Ferraris out, Mercedes had a clear path as Hamilton won his 60th career race and teammate Valtteri Bottas took third.

Mercedes faced a similar scenario at the Spanish GP last year, when Hamilton and then-teammate Nico Rosberg collided on lap 1 and both went out. Mercedes was livid with both drivers that day, and came perilously close to imposing team orders on them.

“You kind of feel for Ferrari. I have been in the situation of losing both cars,” Wolff said. “I know how bitter this is.”

The difference was that Hamilton and Rosberg were fighting each other for the title and, with no main rival from another team, it effectively cost them nothing.

Within Mercedes, Hamilton’s title charge is now the priority.

Although team orders are very unlikely to be imposed, it is clear — unofficially at least — that Bottas will be racing to help Hamilton equal Vettel on four world titles.

Wolff confirmed as much when he inadvertently referred to Bottas as “our second driver” in his post-race debriefing on Sunday, before quickly correcting himself to say “ah, other driver.”

Bottas has had a fine first season since joining as an emergency late replacement for Rosberg, who retired days after winning the 2016 title. Bottas has even exceeded expectations with 10 podiums in 14 races, including two wins, and sits in third place overall.

With a new contract for next year already signed, the Finnish driver has no need to impress Mercedes management and can play an ideal support role to Hamilton in the closing part of the campaign.

Still, he has a little bit of ambition left.

“There are plenty of races to come and plenty of opportunities,” said Bottas, who is 23 points behind Vettel. “Definitely Sebastian is the next target.”

With Hamilton ahead and Bottas closing behind, Vettel is under pressure to deliver at the Malaysian GP in two weeks’ time.