MUMBAI: The regulator plans to put in place a clear bar on non-resident Indians (NRIs) and entities owned by them and resident Indians subscribing to participatory notes, a move aimed at preventing possible round-tripping or laundering of black money.

The Securities and Exchange Board of India (Sebi) is set to tweak its regulations to this effect at its upcoming board meeting on April 26 after the finance ministry recently wrote to the regulator. Such a restriction is already implied through the answer to a frequently asked question (FAQ) but the regulator feels this lacks legal sanctity. 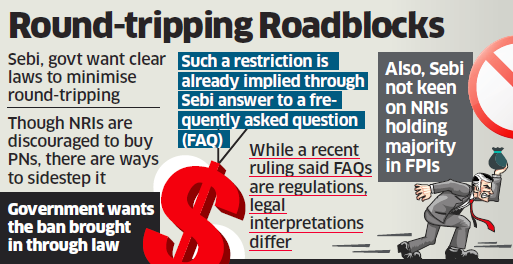 Definition of NRI Crucial
P-notes are a derivative instruments issued offshore to those who want to bet on the country’s stocks and bonds without registering themselves with Sebi. The regulator wants to tighten the rules amid concerns that various variants of P-notes have been floated since the implementation of General Anti Avoidance Rules (GAAR) on April 1.

Investments via P-notes had declined to a 43-month low of Rs 1.57 lakh crore in December but rebounded in January to Rs 1.75 lakh crore before dropping again to Rs 1.70 lakh crore in February. There could be a resurgence in P-note issuance as these are exempted from capital gains tax under the amended tax treaties with Singapore and Mauritius that took effect on April 1.

Legal experts said the concept of NRI itself is a grey area and defining it would be crucial for regulators. They said the prohibition should be strictly enforced to prevent round-tripping of Indian money. “The concern of round-tripping of Indian money, particularly when leading industrialists may have a foreign passport, was always a concern,” said Sandeep Parekh, founder, Finsec Law Advisors. Sebi relies on the income tax definition on what constitutes an NRI.

“The concept of who is an NRI itself is a grey zone ranging from income tax definition which is based on residency to citizenship laws which are typically drafted very broadly to include any person of Indian origin and their kith and kin who are born abroad,” Parekh said. “Defining an NRI within this spectrum would be crucial to allow legitimate money in from immigrants who have left India several generations ago and are doing exceedingly well.”

In recent discussions with a leading custodian, the latter gathered the impression that the regulator was not comfortable with NRIs as a group holding a majority interest in a Category II foreign portfolio investors (FPIs) even though regulations do not restrict this. Rules require Category II FPIs to be broad-based–the minimum number of investors should be 20 and no single investor can hold more than 49%. However, NRIs as a group cannot hold more than 49% in Category III FPIs.