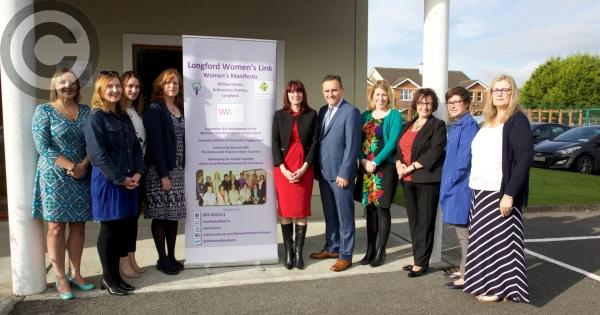 The seminar, organised by Longford Women’s Manifesto Group in association with Irish Rural Link provided an opportunity for the voluntary, community and statutory sectors to reflect on the impacts of the reforms in local government, particularly in terms of citizenship engagement.

The seminar heard from speakers who are actively involved in the new structures, coming from the perspectives of being volunteers and workers within county councils and community organisations.

Deputy CEO of LWL, Tara Farrell referred in her seminar introduction to the unique dominance of our capital city, stating that it has 40 per cent of the State’s population, and that its output represents half of the Irish gross domestic product.

Outside city states such as Singapore, this is unique in the western world and these growing regional disparities are a cause of concern as we look at how our local decision-making structures are operating. In addition, lack of meaningful consultation was also an issue – for example, the consultations for the Open Government Partnership second National Action Plan were held in three urban venues, two in Dublin and one in Kilkenny.

Louise Lennon, Policy Officer with Irish Rural Link outlined current rural development initiatives – the Rural Development Programme which will run up to 2020 and has funding of €3.9b. Under the Towns and Villages Renewal Scheme each local authority is allocated €380,000 to fund improvements in car parks, leisure facilities and shop front enhancement. The challenges facing rural communities were summarised by Louise as being: rural isolation, the increasing older population, the decline in towns and villages, poor transport and broadband infrastructure and the lack of a regional development strategy.

There was much discussion on PPNs, the Public Participation Networks which are the main link through which local authorities now connect with the community, voluntary and environmental sectors. Sara Bourke, Policy Officer with Social Justice Ireland who works closely with PPNs gave an overview of how the new structures are working around the country, emphasising that they are still ‘under construction’.

While acknowledging that PPNs are regarded as having very complex structures, Sara said it is starting to work in practice. She has been delivering training and supports to PPN representatives and emphasised that this ongoing support and nurturing is vital. On a positive front she said representatives are engaging at Municipal District level, see themselves as key actors in drawing up the Local Economic and Community Plans and having a real input into decision-making and feel ‘equal’ at the table.

Views varied regarding their experiences and ‘volunteer fatigue’ was raised as a real danger.  While some stated it was difficult to get new people involved in the structures, Siobhan Cronogue, Longford PPN Resource Worker, said that the last seven representatives for three new committees were all new faces.  A member of the audience highlighted the challenge of getting to grips with the jargon and all the acronyms being used from PPNs, and LCDCs to SPCs and LECPs.

Martin Lydon, Director of Services at Roscommon County Council praised the work of the LCDC in Roscommon and highlighted the valuable role the PPN reps are playing in bringing local knowledge to the table.  Tess Murphy described how being involved in monthly meetings of the Longford Women’s Manifesto Group helps to support her in her role as a representative  and described how difficult it would be to go on to a Committee without having supports in place . Tess also emphasised the importance of supports to monitor and evaluate how monies are spent.

The issue of gender balance on committees was raised – Martin Lydon stated that Roscommon County Council now has a rule that when vacancies become available on committees, groups must nominate a woman and a man. Roscommon County Council are also planning to web cast their council meetings which will make them more accessible to citizens who wish to hear council discussions.  This was a recommendation from a report produced by Longford Women’s Manifesto Group, ‘Making our Councils more open, transparent and accountable’ which was launched in 2015.

A key issue raised by many speakers was the centralised nature of Irish policy making, questioning how much power there is within the remit of local authority committees since policy-making in Ireland is so centralised.  Nuala Haughey, Project Manager of the OPEN Government initiative with TASC which supports democratic accountability stated that ‘Policy-making is done at a theoretical level and Dublin-centric’. Nuala reiterated the challenges for both sectors since they speak different languages and urged groups to ‘tool-up’, referring  to TASC’s, ‘A Toolkit to Open Government’ which will help groups to understand how policy is made and where the power lies.

Previous El-Erian holds 30% in cash as central banks ‘distort’ markets
Next Sensex Gets a Lift from Earnings Uptick, Paces up 145 Points