Sensex kicks off new fiscal on a sour note 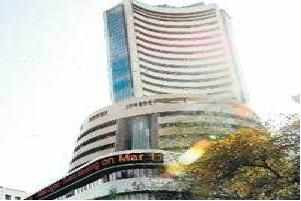 MUMBAI: The new fiscal commenced on a cautious note with the market benchmark Sensex closing 72 points lower at 25,269.64 as depressed stocks in Asia and Europe forced investors to book profit while selling in heavyweights energy and IT stocks also added to the fall.

Yesterday, in its worst show in four fiscals, Sensex had ended 2015-16 with a yearly plunge of 9.36 per cent, leaving investors poorer by nearly Rs 7 lakh crore as global headwinds and foreign fund outflows pounded domestic equities.

Moreover, in the first outflow of overseas funds from Indian capital markets in seven years, foreign investors took out an estimated Rs 18,000 crore during fiscal 2015-16.

On the day, massive plunge in Tokyo, resumption in fall of oil prices, investors waiting for US jobs data for more cues and caution ahead of domestic earnings season took a toll on the equities.

Besides, market ignored expansion in eight core sectors to a 15-month high of 5.7 per cent in February due to sharp pick-up in natural gas, refinery products, fertiliser, cement and electricity generation.

Shares of Maruti Suzuki, country’s largest carmaker, ended 0.11 per cent higher at Rs 3,723.25 after the company posted 15.9 per cent growth in total sales in March.

Shares of infrastructure firm IVRCL remained under selling pressure for a second straight session and slumped 9.70 per cent after a portion of a flyover being built by the company in Kolkata collapsed.

Overseas, Asia edged lower as investors began the new fiscal on a cautious note. Key indices in Hong Kong, Japan, Singapore, South Korea and Taiwan declined 0.79 per cent to 3.55 per cent while China rose to 0.19 per cent.