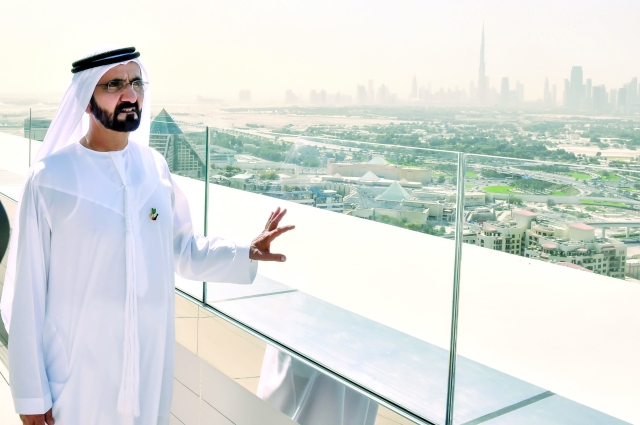 Over the course of just a few decades, Dubai has transformed itself from a spit of sand about the size of Rhode Island into the Singapore of the Middle East.

It is a political, economic and financial success story in a region with lot of conflicts and tesnsions. And it’s al l the vision of one man: Shaikh Mohammed bin Rashid Al Maktoum.

Shaikh Mohammed’s father, Shaikh Rashid, fondly known as ‘The Father of Dubai,’ ruled Dubai for 32 years and was the Vice-President and Prime Minister of the United Arab Emirates until his death at age 78.

Shaikh Mohammed has converted Dubai from a sleepy little coastal village into a world-class city, famous for its ambition, drive, and economic promise.

He is the founder, part-owner, and visionary behind companies such as Emirates Airlines, a UAE-based airline serving over 100 destinations.

Nakheel, the property developer that built a trilogy of man-made islands; and DP World, a leader in international marine terminal operations.

Despite being surrounded by political instability in the Middle East, Shaikh Mohammed pursued capitalism and embraced Western culture while maintaining safety for millions of annual tourists.

By 2010, Dubai had the world’s tallest building, the most expensive hotel, and the largest shopping mall.

Growth was rapid, infrastructure was weak, and the real estate bubble grew as the financial crisis loomed.

Excerpts taken from ‘Shaikh Mohammed and the Making of  Dubai, Inc’ by HBS and  ‘A History of Future Cities’ where author Daniel Brook examined how Dubai has become ‘crucibles of non-Western modernity.’