Sindhu aims to return with gold from world c'ship 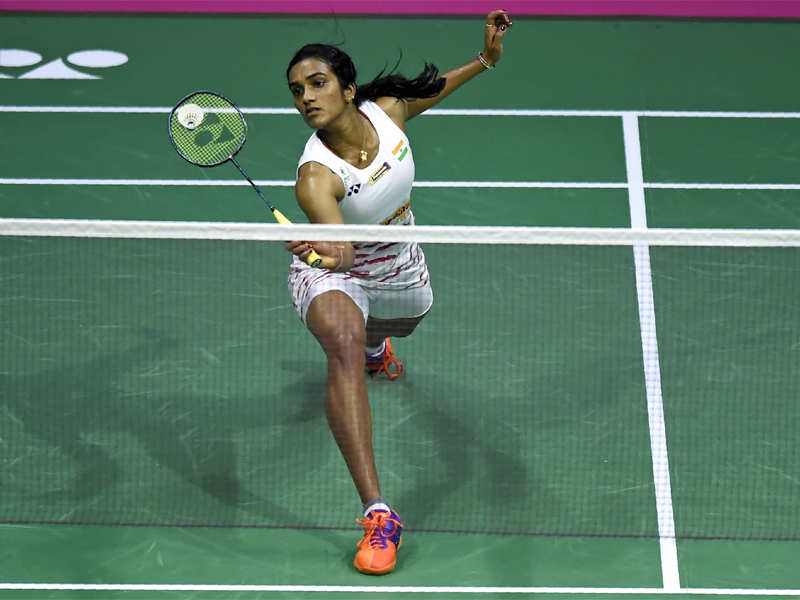 GLASGOW: Olympic silver medallist PV Sindhu cruised into the final of the Badminton World Championships with an easy win over Chen Yufei of China, setting herself up on course to become the first Indian to win a gold at the showpiece event.

The 22-year-old Sindhu notched up a straight-game (21-13, 21-10) win over world No. 10 Chen in the women’s singles semifinals on Saturday night, to assure India of at least a silver medal from her after compatriot Saina Nehwal had to settle for a bronze.

In the summit clash, Sindhu faces Japan’s Nozomi Okuhara who had beaten Saina 12-21, 21-17, 21-10 in the first semifinals on Saturday. With Saina’s semifinal loss, the hopes of an all-Indian final did not materialise.

She can do even better and script history by becoming the first Indian world champion shuttler.

India has won one silver (through Saina in 2015) and four bronze in the world championships before this Glasgow edition.

With this win, Sindhu also became the only second Indian to reach the final of a world championship after Saina achieved that feat in the last edition at Jakarta.

Sindhu has a 3-3 head-to-head record with her summit clash rival Okuhara in their last six meetings. But, the Indian has an upper hand in the last two meetings at Rio Olympics and 2017 Singapore Open.

Ever since Sindhu arrived here, she has been talking about her desire to change the colour of medal — from bronze (in 2013 and 2014) or silver (in 2016 Olympics) to gold.

Asked after the semifinal match if a change in the colour of medal meant a silver would do, Sindhu said, “Oh no, it won’t be (enough). Winning today was important as I wanted to change the colour of my medals. I want to win and the aim is to win gold and I have to be focussed on that.

“It will be a tough match in the final. Though I have beaten her (Okuhara) in the Olympics, it is a new match and there will be a new strategy. She will also come up with new strokes and I will have to be prepared. I will give my heart out for the gold,” she added.

Asked about the semifinal match, Sindhu said, “Though the scores do not show, she (Chen) fought for each point and it was a tough match, despite the lead I had.”

“There were long rallies and she was not leaving any shuttle. Overall, it’s a great feeling but it’s not over as yet. There is one more match to go. I’ll have to be focussed. It’s not enough that I have come to the final, that one match is very important and I hope for the best,” she said.

“Looking back, the win over Cheung (Ngan Yi) in the pre- quarterfinals made a big difference as I came back from the brink of defeat.”

Coming into the semifinal match, Sindhu had a 1-1 head- to-head record against the 19-year-old Chinese, having lost to her at the Malaysia Open in April. But she avenged that loss with another sizzling performance.

During the match, the duo engaged in long rallies with Chen trying to make the Indian twist and turn with her controlled returns. After being initially tied at 3-3, Chen, the reigning world junior champion, won a long rally when Sindhu miscued an overhead stroke to break the deadlock.

The fourth seeded Indian tried to dictate the rallies and she did manage to break the Chinese defence to claw back at 8 -8 and then led 9-8 when Chen hit the net. A surprise jump smash from Sindhu earned her another point and she wrested the 11-8 advantage with a lovely drop.

The lanky Indian tried to attack early in the rallies and backed it with precise drops and smashes to move to 13-8 lead. Soon her fist-pumping was back as she celebrated each point, reaching 15-9 at one stage.

The drift, however, seemed to bother Sindhu as she misjudged a few returns at the baseline to concede points. Yet the Indian marched on and moved to 19-13 when Chen sent the shuttle long. Another rally ensued and Sindhu caught the shuttle early at the net and dispatched it to gather seven game points. She won the opening game when Chen hit long.

Sindhu continued in the same vein after the change of sides, reaching 4-0. The diminutive Chinese seemed to find it difficult to negotiate the drift as she made judgemental errors and also hit wide and long.

Sindhu tried to vary the serves and also change the pace of the rallies by mixing straight clears with drops and deceptive returns at the nets. It worked as she soon led 8-0.

Sindhu seemed more patient as she constructed the rallies, making her rival move to the deep corners. Chen seemed clueless as she struggled with her returns as Sindhu grabbed a decisive 11-1 lead at the break.

The Indian continued to put relentless pressure on her rival with some delectable forehand and backhand drives to lead 15-3. Chen kept fighting and won a few points here and there but it was always a mountain to climb as Sindhu continued to move ahead with a series of powerful smashes. Chen showed glimpses of her strokeplay with some exceptional cross court net flicks.

However, Sindhu soon reached the match point when Chen once again hit wide. The game was finally over when Chen again hit long.

Previous Can Hong Kong’s Express Rail Link shine a light on Disneyland and tourism?
Next More foreigners are needed to build the economic ‘railroad’