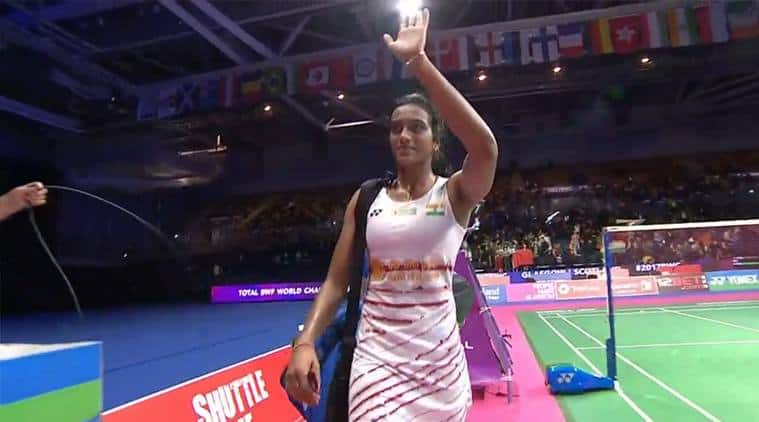 Never before India had seen its player reach the Olympics and World Championships finals but on Saturday, PV Sindhu did it. The Hyderabad girl became the first Indian badminton player to reach the final of both those tournaments after she completed a dominating 21-13 21-10 win over China’s Chen Yufei in the semi-finals of World Badminton Championships in Glasgow on Saturday.

Sindhu dominated the match with her attacking plays with some jump smashes. She continued top quality badminton and made it a no match after winning the first game 21-13. She destroyed the Chinese in the second game to avenge her loss from the Malaysia Open earlier this year.

It could have been an all-Indian final in Glasgow but Japan’s Nozomi Okuhara defeated India’s Saina Nehwal 12-21, 21-17, 21-11 in the other semi-final earlier in the day.

Sindhu used her backhand drops to a great affect in the first game and she took an 11-8 lead. Chen, trying hard to remain in the game, failed to match the pace of Sindhu and eventually played some erratic shots which cost her some points.

Clearly, Chen found the going difficult when the second game began. Sindhu’s powerplay meant she dominated the game from the beginning and helped herself to a 8-0 lead. While the drift had cost Sindhu a couple of points in the first game, this time it was Chen who was made the same mistake and gave away points. Sindhu led 11-1 at changeover.

Sindhu was in no mood to bring down the momentum and continued the game in same style. In 47 minutes, she wrapped up the match to enter her first final.

A two-time bronze medallist at this stage, Sindhu now has a tough ask against Okuhara who has beaten top seed Akane Yamaguchi and 2014 world champion Ratchanok Intanon in pre quarter-finals and quarter-finals respectively. Their head-to-head record stands at 3-3 with Sindhu winning the semi-finals of Rio Olympics and Singapore Open this year.