At a time not too far distant, Lee Kuan Yew, the font of all authority, legitimacy, orthodoxy and indeed fear in Singapore for over 50 years will no longer be with us. It is thus perhaps appropriate to begin discussing what the absence of Lee Kuan Yew will mean for the Singaporean republic. 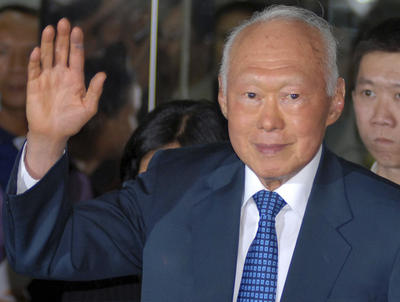 With the endorsement of the British, Lee came to power as prime minister of Singapore in 1959 and then eliminated the political Left through Operation Cold Store in 1963. The incorporation of Singapore into Malaysia and its subsequent ouster in 1965 gave him almost autocratic power to pursue the development of the island polity as he saw fit. No one will deny the massive economic and social development which Singapore then saw under Lee Kuan Yew, with per capita GDP leaping to first-world levels during his administration.

However, the social costs of such economic development have not even begun to be tallied. The maintenance and strengthening of colonial legislation to allow unlimited detention of political foes without trial; the control of all media (with Singapore now globally ranked alongside Iraq and Qatar in terms of press freedom); the use of the courts to drive political opponents to bankruptcy; the absolute control of the people’s capacity to organise, to assemble and to process; and the emasculation of the union movement all contributed to what was effectively a one-party state. The party-state tightly controlled every aspect of social existence and claimed that it could represent the interests of all citizens.

The resultant malleable, fearful and supine population served the needs of the People’s Action Party (PAP), and while this was useful for economic development, it was less than efficient in creating sentiments of loyalty or patriotism. With the lower levels of society serving the interests of the elite, there was little intrinsic group loyalty, and money had to serve as a poor substitute. Indeed, the degree to which the political arrangements and structures instituted by Lee Kuan Yew have warped Singapore society remain largely unexplored in mainstream media. Singapore Inc.’s spin-doctors’ tales solely of positive manifestations of economic development continue to hide the damaging social effects which his autocracy has had on every aspect of society.

Lee Kuan Yew relinquished the prime ministership of the Republic in 1990. In that year the mantle of premier passed to Goh Chok Tong and then, in 2004, back to the Lee family, with son Lee Hsien Loong assuming power. Despite these changes, the shadow of Lee Kuan Yew continues to enthral both the Singapore populace and many beyond the country’s borders, and his impending death thus raises questions about the future of Singapore.

Amazingly little has been written on what might happen to Singapore after Lee Kuan Yew passes on, as if even expression of this possibility is sacrilegious. Whither, then, Singapore after the demise of Mr Lee? Little change can be expected in administrative superstructures within the Republic or even in foreign policy directions. What is likely to see gradual change, though, is the political base. There have been in recent years all sorts of in-house proposals on how the PAP might deal with its surfeit of power and control, including intentionally dividing the party into two, to ensure a loyal opposition. However, the Singapore populace has already decided by their votes in the 2011 election that they would prefer an external opposition. The May 2011 election saw the PAP garner fewer votes than it has won since the establishment of the Republic, losing two cabinet ministers in the process, but still holding 81 out of 87 seats

There is no likelihood of the PAP losing power in any foreseeable election, but the death of Lee Kuan Yew will greatly diminish the authority and likely the legitimacy of Lee Hsien Loong both as leader of the party and as Prime Minister. Are there other leaders in waiting? Lee Kuan Yew has long done his utmost to eliminate potential rivals to his own leadership and then rivals to his selected successors as party leaders. The former foreign minister George Yeo had been recognised by Lee as a likely potential challenger to his son in the event of his own death. It was thus that we observed, prior to the 2011 election, the remarkable threats made to the voters of Aljunied Constituency by Lee senior. Repeatedly telling the electorate that they would have five years to ‘repent’ if they chose the Workers’ Party, Lee brought about the result he intended. The electorate voted for the opposition and thereby drove George Yeo out of Parliament and beyond capacity to challenge for the party leadership. No other credible challengers now exist within the cabinet.

However, despite protestations that he has retired from politics, post-ministerial George Yeo continues to circle. Having taken a job with Robert Kuok’s Kerry Group, Yeo is now the best-known and most active Singaporean in the region. His position allows him to travel incessantly and glad-hand political and business leaders around the Asia Pacific, while participating in China–ASEAN events, and being appointed to high-profile international and regional positions. He also continues to actively work the domestic constituency, participating in national events, accepting patron and advisory positions with local bodies, and recording all of his international and domestic activities on a very active Facebook account with 90,000 followers.

Today, the PAP is obviously frightened. Both the results of the 2011 election and the impending death of the man who has held the party together for more than half a century are bringing to the surface insecurities about the directions which the party has long pursued and its future leadership. Social and welfare policies unthinkable in the past are now being discussed and inviolable shibboleths, such as meritocracy and mandatory death sentences, are being questioned. As the PAP is inevitably pushed by its competitors toward a locus more aligned to social justice, and having necessarily to address some of the injustices perpetrated during the Lee Kuan Yew era, it will be seeking a leader less affiliated with the man and that period. It is at that time that the preparations which George Yeo is now making will position him to contest the leadership of the PAP, a party which he has already declared ripe for reform.

Geoff Wade is a Canberra-based researcher and author.